Religious Order in the Court

I’m sure what we all really need right now is a middle-aged white man weighing in on the Supreme Court overturning Roe v. Wade. But really, do any of my opinions matter in the grand scheme of things? I’ve seen arguments to the effect that it’s not really about trying to control women, and perhaps that’s true on an individual level. But for the people who are making the rules, it totally is. Well, I guess it’s not JUST about that; it’s also about controlling other minorities, questioning the right to privacy in general, and trying to institute a theocracy. Clarence Thomas made that much clear when he suggested reevaluating other cases, including the one declaring sodomy laws unconstitutional. Even just from the name, let alone the content, those sound like they should have gone out of fashion with trial by ordeal. I’ve often said that, while I don’t agree with it, I can buy the anti-abortion argument in the sense that it is technically destroying life, but it doesn’t seem like too many people who hold this belief are that concerned about applying it to other forms of life.

And those who DO hold a philosophical position that all life should be preserved likely realize it’s not always possible. I’ve seen a few comments recently questioning why people are so insistent on mentioning rape and incest, as if every mother should be forced to carry babies in term in other cases. I think that the rape and incest thing is a philosophical argument, a way to get anti-abortionists to admit that they don’t think it’s wrong all the time. The thing is, I’m not sure they can be swayed by philosophical arguments. It’s a common thought among the well-intentioned and well-educated that anyone can be won over to your side if your logic is compelling enough, but not only is this inaccurate, but some of the people who try (and I’ve been one of them at times) are really overestimating how rational they’re being themselves. From what I’ve observed, it seems to be enough for some people that abortion is bad, guns are good, and being gay is gross, even if their rationale for these ideas isn’t consistent. Besides, there seems to be significant overlap between vehement opposition to abortion and indifference toward rape and incest (unless it happens to them or someone they like). It’s also pretty well-established that the rich and powerful will still be able to get safe abortions, and have anal sex, and do drugs, regardless of what the laws are, because they think they’re above them and, practically speaking, often are. Sometimes these things come back to bite the ringleaders in the ass, Robespierre style, but not often enough. Hell, Mike Pence is still trying to curry favor with the people who attempted to assassinate him, even considering a run for President.

I’m not so optimistic as to think he’d stop being a disgusting person due to a near-death experience, but it might at least have made him choose to retire. I guess attempts on your life are just part of the power game, and in this case he won. Of course, the rich and powerful would also be able to get guns if they wanted them, even if they’re illegal for everybody else. And you’d think a well-armed populace would be harder to control, so refusing to put any limits on that is probably more pandering than anything else.

I’ve come across some arguments that the government just wants to create chaos to keep people dependent and scared, and maybe there’s something in that, especially considering Fear of the Other is essentially the foundation of the modern Republican platform. But, at the same time, I’m not sure things are always that carefully planned; it’s probably more common that they just don’t care about most people. Giving everybody guns and hoping only the undesirables are killed just seems like too dangerous of a plan. That doesn’t mean someone wouldn’t try it (was it Orrin Hatch who suggested that the government use computer viruses to stop people from illegal downloading?), but I’m not sure it would get past the more intelligent schemers. It’s the same way with COVID being an intentionally created biological weapon; too hard to control when there are so many easier ways to keep people docile. But then, that theory was also compounded by its adherents willfully refusing to understand how germs work.

It’s quite true that this decision was made largely by judges appointed by presidents who lost the popular vote, one of whom was credibly accused of sexual assault, as were two of the justices who supported it. But it’s also true that there is a significant part of the population that agrees with these scumbags, albeit not a majority by any means. Donald Trump didn’t win the popular vote, but a hell of a lot of people still voted for him. It’s also worth noting that there are quite a few Democrats who agree with Republicans on some of these issues, or at least will avoid taking a firm stand so they won’t scare off people who do. It’s quite likely that a Democratic majority wouldn’t have been able to codify abortion rights so we don’t all have to rely on one court case, but it seems so much worse to me that they didn’t even try. I give Obama credit for trying to close Guantanamo Bay, even though he didn’t succeed. I’m glad the Democrats argued against Brett Kavanaugh, when it didn’t really matter in the end since the Republicans were in lockstep. And impeaching Trump was the right thing to do, even when it was basically a foregone conclusion that the Senate would let him off the hook. There’s something to be said for making the attempt. And why keep trying to appeal to people who think you’re servants of Satan even if you’re total centrists? 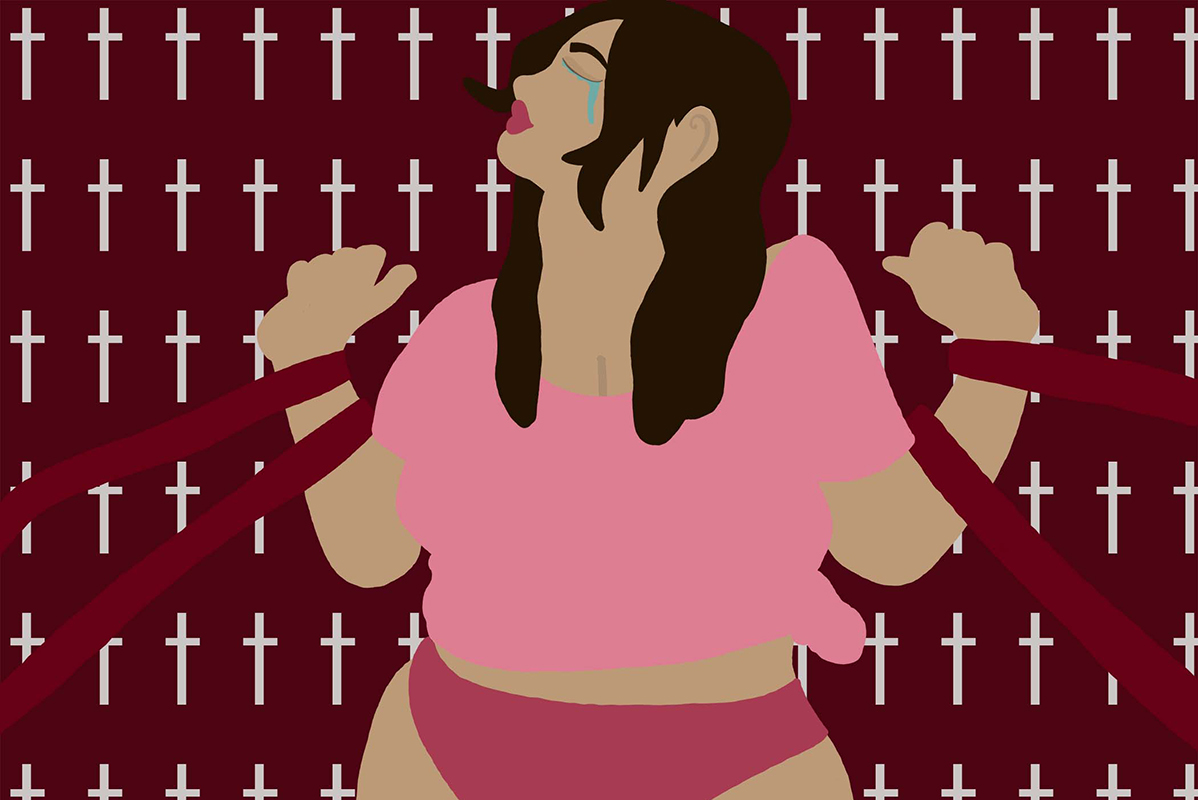 As far as religion goes, the anti-abortion position isn’t really one that’s supported by the Bible, and the Catholic Church only took a hard-line position on this as recently as 1869, with Protestants joining in even later. That’s not to say that church leaders weren’t opposed to abortion before that, but it wasn’t, like, one of their main things, and there was some disagreement. It’s so weird to see people claiming life begins at conception to be a settled argument, rather than just one of many possibilities. And again, since when does Christianity teach that all life has to be preserved? It’s not Jainism. It’s interesting to me how many political arguments motivated by religion don’t have much to do with the actual tenets of the relevant religion. The Bible does condemn homosexuality, but it’s not a main theme or anything. Giving support to the poor? That IS a main theme. And sodomy doesn’t have much to do with the Biblical story of Sodom, which in at least one interpretation was more about selfishness anyway. But this is sort of pointless anyway, as we’re not supposed to impose our religious beliefs on other people anyway. That’s supposed to be guaranteed by a different document written by rich, slave-owning men. 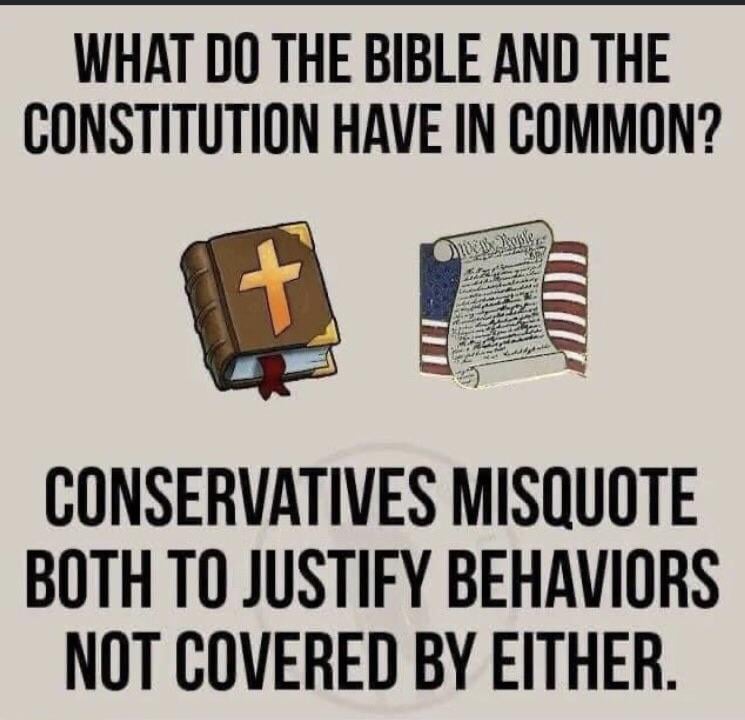 While it seems extra hypocritical to use religion to make people follow your rules when they aren’t even part of the religion, it should be illegal either way. But it’s not like religion being a tool to gain power and then imposing rules that aren’t even part of said religion is anything new. I’ve been struck by how much of the Deuteronomistic history, with its criticism of the Kings of Israel and Judah, can be read as an attempt for the Jerusalem priesthood to eliminate potential rivals. I’ve actually seen people claim that ALL morality comes from the Bible, as if murder and stealing were okay before Moses‘ time. Didn’t Moses himself get in trouble for killing a guy long before he received the Ten Commandments? That’s also why I find it particularly annoying when people talk about the Biblical definition of marriage, when, as far as I can tell, the Bible DOESN’T define marriage, just kind of assumes anyone reading it is already going to know how marriage works. It also figures you’d already know what Ham did to Noah, which we no longer do.