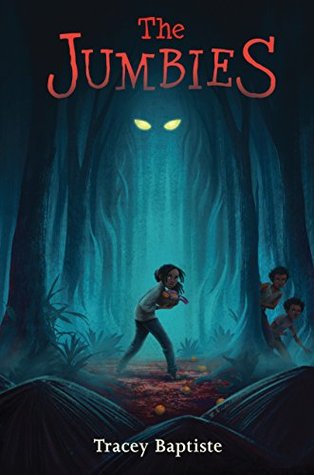 The Jumbies, by Tracey Baptiste – I’d been interested in reading this since I found out what Jumbies were, which is basically evil spirits in Caribbean folklore. In this book, Corinne La Mer lives on an island with her widower father and grows very good oranges. She doesn’t believe in Jumbies, but she ends up meeting one named Severine, who subsequently tries to put her dad in thrall. This is extra disturbing when it turns out she’s also Corinne’s mom’s sister. Baptiste has said the book is partially based on the Haitian fairy tale “The Magic Orange Tree,” in which a tree that grows out of a girl’s mother’s grave saves her life. That, in turn, reminds me of the Grimms’ version of “Cinderella.” I feel that the story took a while to get anywhere, and while I liked elements of it, it didn’t really stick with me. 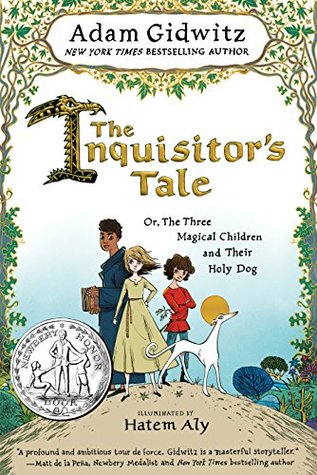 The Inquisitor’s Tale, by Adam Gidwitz – My friend Amy recommended this book to me years ago, and I only just now got around to reading it. I remembered it because I saw a notice online that there’s a sequel now. (EDIT: It doesn’t look like there is a sequel after all. It must have been a new edition or something that I noticed.) Set in the Middle Ages, it has a Canterbury Tales style (although I wasn’t able to get all that far in the actual Canterbury Tales; maybe I should try again), with several people who meet up at an inn near Paris telling stories of three children and a dog, all with extraordinary powers. There’s a girl named Jeanne who can predict the future, the incredibly strong acolyte William, and the Jewish boy Jacob who can heal wounds. The kids make it their mission to prevent the King of France from burning a bunch of copies of the Talmud. They’re accompanied by a monk whom they initially find terrifying, but come to realize he’s actually quite reasonable, and has a secret identity. Some of the characters are actual historical figures, and others loosely based on them. An encounter with a flatulent dragon is based on the story of St. Martha and the Tarasque. The setting is thoroughly researched, but the language and dialogue are pretty modern. It also deals with the prejudices of the time, particularly antisemitism, but William’s instructor has a lot of other ones as well. 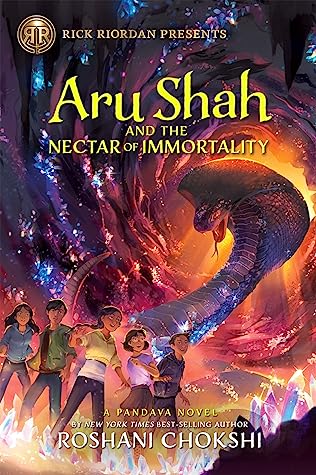 Aru Shah and the Nectar of Immortality, by Roshani Chokshi – In the fifth and final book of what was originally supposed to be a series of four, the reincarnated Pandavas have lost their celestial weapons, and need to find a way to prevent the Sleeper, Aru’s father, from obtaining eternal life and causing the apocalypse. It doesn’t help that a lot of mythological beings are pretty much resigned to the end of the world. Accompanied by the Naga Prince Rudy, they meet with the Bear King Jambavan and the poisonous Vishakanyas, and have to participate in a talent show with musical abilities granted to them by Aiden’s apsara grandmother Menaka and the horse-headed gandharva Tumburu. And Aru’s sister Kara, who has betrayed the others and taken the Sleeper’s side, is questioning whether she’s done the right thing. This book has the same engaging family dynamic between the Pandavas and abundance of pop culture references as its predecessors, and I appreciated Aru’s decision of what to do with the titular nectar. There are also a few references to the mythology of other cultures, including the Mayan Ixtab.