The Male Must Get Through 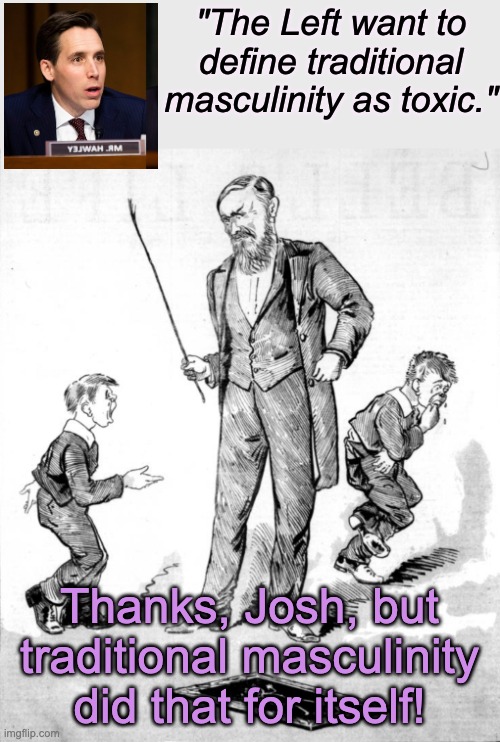 I’ve noticed an obsession the far right seems to have with masculinity. Someone on Twitter linked to this article, which is four years old at this point, but seems pretty accurate. It’s based on a non-scientific study, but it supports what generally seems to be the case, that people who are preoccupied with a rigid idea of masculinity also tend to be the most insecure about it, and that someone like Donald Trump who projects phony machismo (to be fair, there might not be any other kind) would appeal to them. More recently, Josh Hawley has announced that he’s writing a book called Manhood: The Masculine Values America Needs. I don’t know whether running away when you’re caught in an insurrection is one of these values. He also somehow thinks pornography and video games are making men soft, when of course toxic masculinity is very active in the gaming community. But even if you put aside the hypocrisy, what’s so great about traditional masculine gender roles? Even if nothing else, they seem exhausting. I guess I’m biased in this respect, as a cishet man who was picked on for not being sufficiently masculine. There’s a lot of gatekeeping involved in such things. I think back to how other boys took the sports we played in gym class way too seriously, causing them to lash out at people like me who weren’t very good. Never mind that this probably helped to turn me off sports in general, and made me feel like there was no point in even trying. It’s too bad the title I used for the post I linked to references a guy who turned out to abuse women, but I didn’t know that at the time. I’ve wondered before why some women don’t like men identifying as feminist, and I still don’t know for sure, but I suspect some of it might have to do with men who use it as a way to get out of responsibility. I don’t know much about Joss Whedon, but that seems to have been a similar case, someone who proudly espoused feminism and probably did support it on paper, but was terrible toward women. But anyway, I’ve come to really appreciate the term “toxic masculinity,” which I know some dismiss as politically correct nonsense, because it acknowledges that not ALL masculine traits are bad; it’s more in how they’re expressed.

The masculinity obsession ties in homophobia and transphobia as well. We’ve pretty much determined that gender is a social construct, but when much of your identity is based on it, I guess that’s a scary concept. I’ve kind of had the idea that identifying as a gender other than the one you were assigned at birth, while certainly not a problem, might be putting too much emphasis on gender. But from what I’ve seen, it doesn’t usually work that way. I’m probably never going to totally understand being trans, but I HAVE been in plenty of situations where I felt like I couldn’t be myself, and from that perspective I totally get it. People who come out as gay or trans often seem much happier, like stuff that never made sense to them before now does. I guess there isn’t really a comparable experience for cishet people, although being diagnosed as autistic has SOME similarity. While not a new thing, the insistence that kids are being “groomed” into being LGBTQ seems quite prevalent nowadays. We come back once more to hypocrisy, as a fair number of these people seem to have no problem with indoctrinating kids into far-right, racist, sexist viewpoints. And saying you don’t think your kids will understand is both insulting and likely a self-fulfilling prophecy. It’s the parents who apparently think a man wearing women’s clothing to read to kids is such a confusing concept. 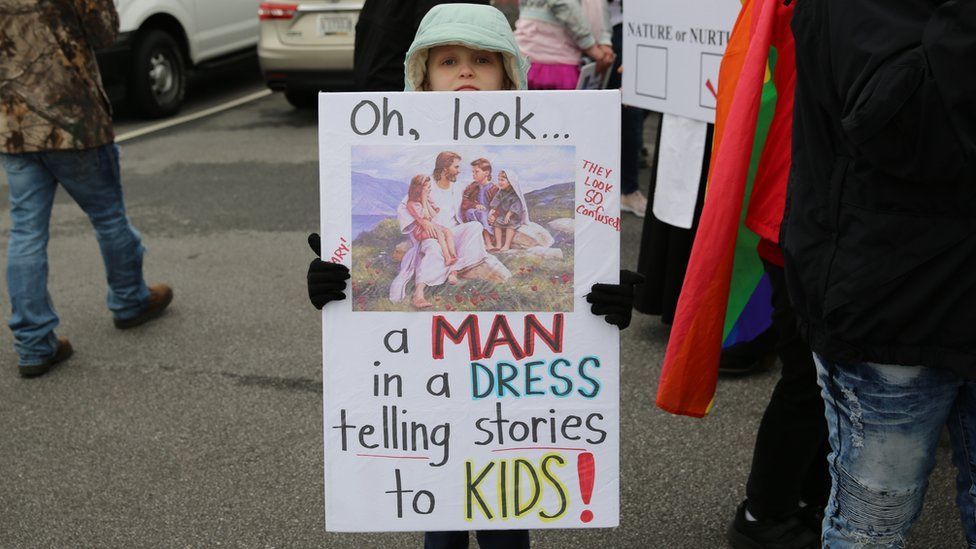 I’ve also seen some stuff about how this ties into white supremacy, as they think a breakdown in gender roles means fewer white babies being born. It sounds far-fetched to me, but so do many such ideas that are disturbingly common. When examined outside of context, does “only full-blooded Germans are decent people, and everyone else should be marginalized or killed” sound like something that would attract enough people to lead to millions of deaths? Has it occurred to these people who think the survival of the white race is of the utmost importance that forcing others to give birth probably isn’t going to get the parents or their kids on your side? But I guess that doesn’t matter if you think intelligence is a racial trait, or whatever. Of course, it’s not like white people are the only ones obsessed with gender roles. I just came across an article about how much Hawley’s ideas are in line with the Chinese Communist Party. And there are people who think men having sex with other men isn’t effeminate but hyper-masculine, perhaps as in the ancient Greek model. I suppose neither of these is that relevant to my main point, but when has that stopped me before? 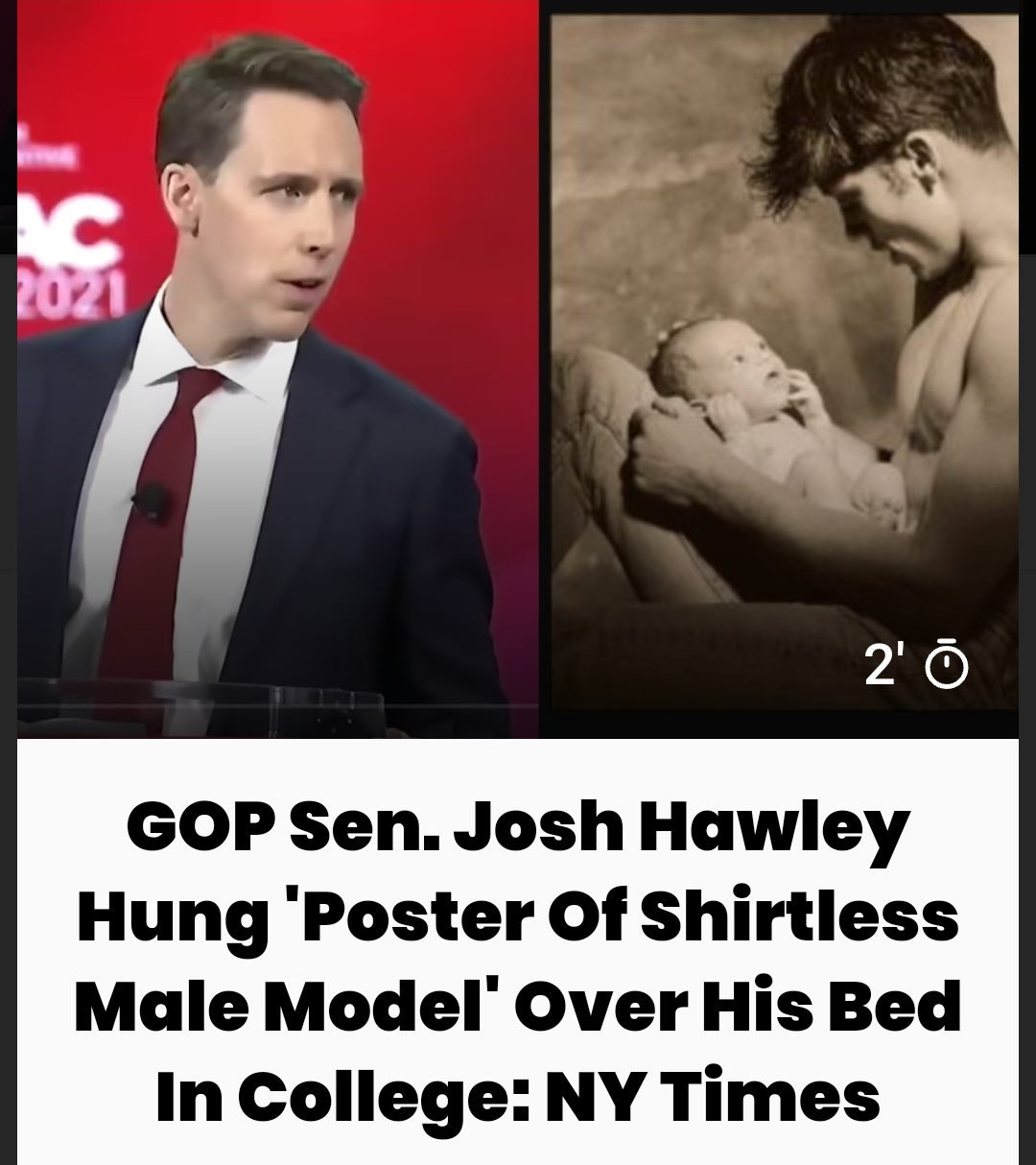