The Need for Speedy 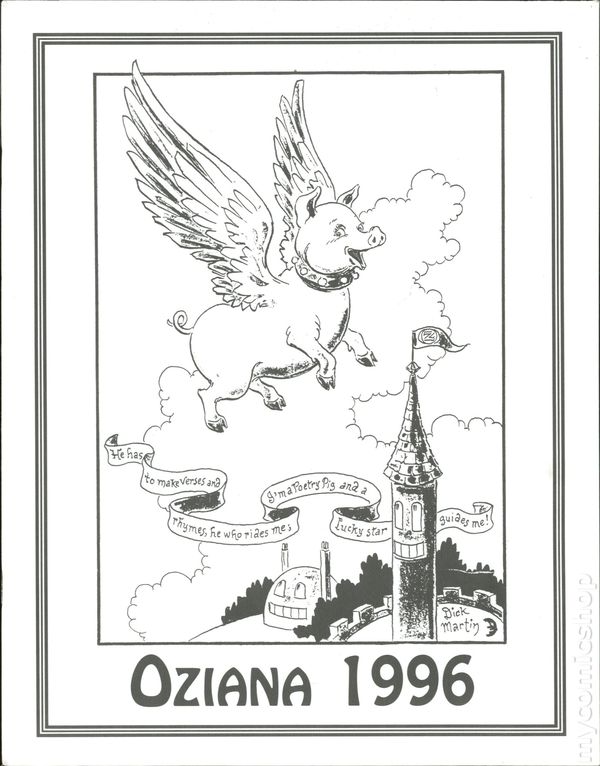 The 1996 Oziana is unusual in that it contains only one story, Umbrella Island in Oz, by Ruth Waara. As such, it’s kind of weird that the cover picture has nothing to do with it, instead being a Dick Martin drawing of Pigasus, accompanied by a verse from The Wishing Horse of Oz. It’s a nice picture, very much in the same style as the ones in the collections of his art that the International Wizard of Oz Club published. I remember putting a photocopy of it on my dorm room door back in college, and I got at least one nice comment on it. Pigasus does play a significant role in Waara’s unpublished sequel, The Magic Cryptogram of Oz.

The tale is a follow-up to Speedy, following up on the ending where Ruth Plumly Thompson tells us that she thinks the title character will someday return to Umbrella Island. It starts with a carnival in Michigan, where crooked game operator Ivan Montebank escapes from the police up the rope ladder to the flying island, and manages to convince most of the Umbrellians that he’s the newly elected King of the United States. In addition to his general trickiness, he also steals some Agree Filtre from Waddy to keep the people in line. Johnny Concel, who was at the same carnival, chases his sister Lynn’s pet chameleon Pickle up the same ladder, where they’re locked up. Speedy finds out about the encounter, and gets Dorothy to transport him to Oz. When they come to Umbrella Island, however, Dorothy has lost the Magic Belt, and they’re locked up as well. Pickle, who can turn the color of anything he touches while in a fairyland, plays a significant role in thwarting Ivan’s schemes.

In his usual manner, Terrybubble considers Pickle to be his cousin, and they become fast friends.

Ken Cope, identified as a former Disney animator in the introduction, draws the characters much as John R. Neill did, but somewhat more exaggerated.

Incidentally, the issue was originally published with a missing page, but people who bought it received an addendum.

I managed to find the story as Waara originally wrote it, and while it’s largely the same, Robin Olderman did streamline it a bit, mostly by cutting out a subplot where Speedy and Johnny are captured and enslaved by witches led by Cinderbutton, a character briefly mentioned in Pirates. Lynn also accompanies Johnny on the adventure, and Ivan is stopped in a different way. The published version also adds references to Skylab, the Watergate scandal, and the MGM movie being on television, suggesting a later date for it. I don’t think that fits too well with Gureeda being eighteen. It’s possible that the Umbrellians age slowly, but in that case, wouldn’t Speedy be quite a bit older than her when they developed feelings for each other as peers? Even in the original, Johnny and Lynn’s mom says she read Speedy as a little girl. According to Joe Bongiorno, Johnny and Lynn are based on and named after Waara’s grandchildren. There’s no mention in the original of King Sizzeroo abdicating, but when I wrote something about Speedy and Gureeda, I followed up on the ending of the Oziana version with her being Queen and Speedy her consort.

Next time, we return to Grapelandia, the Tin Woodman makes an important decision, the Braided Man becomes a hero, and Oz gets computer viruses and spam.