The Domain of the King

You may remember that Beth and I were watching all the Elvis movies in order, and I’d been writing about them in groups of three. But then it was a few months between seeing the seventh and eighth, and we just saw the 2022 Elvis film at the theater yesterday, so this is a post that’s been a long time in the making.

Wild in the Country – I’m pretty sure Elvis has gotten into a fist fight in every movie so far, and this one starts with it. He goes to prison, and when he’s up for parole, his uncle agrees to take him in and let him work at his drugstore, where he sells snake oil. He’s also required to see a social worker, and she really does help him, but he develops feelings for her that she can’t reciprocate. (Who does he think he is, Tony Soprano?) A neighbor woman and his cousin (it’s the South, I guess) are also interested in him, but he surprisingly doesn’t end up with any of them. Instead, after the social worker sees his writing, she pushes for him to go to college, which he does in the end. It’s a rather positive message of redemption and the importance of social work and education, even if there are a lot of disturbing turns along the way, including his being falsely accused of murder by the social worker’s ex-boyfriend. I knew I recognized the name of Tuesday Weld, who plays the cousin. This is the only thing I’ve seen her in, but there’s a band called The Real Tuesday Weld who worked with the Puppini Sisters a few times, so I think that’s why. She was in a lot of stuff, and dated Elvis for a little while, as well as some other famous people. 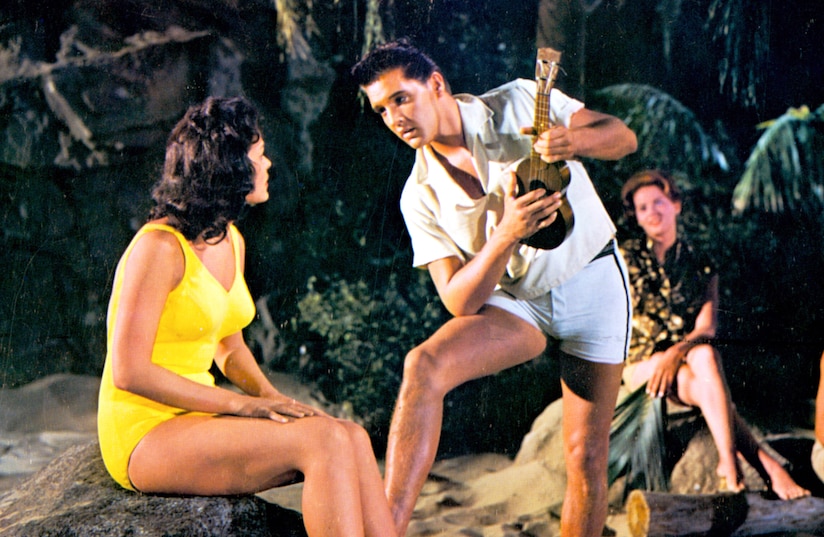 Blue Hawaii – Beth’s mom has talked about how she almost got thrown out of this movie because her friend was talking too much. My dad said he didn’t like it at all. Elvis plays Chad Gates, the son of a pineapple company manager, who has just been discharged from the Army and just wants to hang out with his girlfriend and his native Hawaiian friends (whom his family keeps calling “beach boys”), while his parents want him to join the family business. Angela Lansbury, who was only ten years older than Elvis, plays his mother with a Southern (American) accent. Chad’s girlfriend gets him a job she thinks he’s better suited for, a tour guide at the travel agency she works for. He shows around a young teacher and her teenage girl students, one of whom is sulky the whole time and then tries to hit on him. Chad is apparently more conscientious about such things than the actual Elvis, and rebuffs her advances. But he also spanks her, which is pretty inappropriate, I would think. And yes, there’s a fistfight in this one as well. Maybe it was in the contract. The soundtrack includes the title song and “Rock-A-Hula Baby,” as well as a song about how Chad’s friend eats a lot of food. Pretty sure that last one was never a hit. But most interestingly, “Can’t Help Falling in Love” is performed without a band or anything, just Elvis singing along with a music box he gives his girlfriend’s grandmother. The ending has Chad’s girlfriend starting her own travel agency, and him giving tours to representatives from his dad’s company, essentially making everyone happy. Of course, most new businesses fail in their first year, don’t they? Elvis – This one is a movie about Elvis rather than starring him. Austin Butler plays the King of Rock and Roll, and I believe he sings the songs earlier on in the movie, although later ones use recordings of the actual Elvis. Tom Hanks plays a rather over-the-top Colonel Tom Parker, made up to look fat and with a pronounced Dutch accent. Since in both real life and the movie, Parker was trying to hide the fact that he was from the Netherlands, the accent doesn’t make a lot of sense. Elvis never found out about his background or fired him on stage, either. It appears that the Colonel was generally able to pass as being from West Virginia until a few years after Elvis died. Parker narrates the film, but he’s unreliable and not presented at all sympathetically. A good deal was made of his past as a carnival promoter, with scenes where he talks with Elvis on a Ferris wheel and in a house of mirrors. I noticed that, perhaps in response to how the King is said to have appropriated Black culture, the movie makes a point of showing him having Black friends and the blessings of artists to sing that style of music. This might well have been accurate, but I still think it was a conscious choice to focus on it. I also noticed that they seemed to have avoided directly mentioning that Priscilla was fourteen when she and Elvis started dating. Parker’s narration did say she was a teenager, and Elvis later confirms their ten-year age difference, but it’s downplayed. There was a lot of use of stylized text when introducing new scenes, as well as rapidly switching back and forth between different footage, like alternating between adult Elvis performing and him as a boy. There was one bit that I guess was supposed to be in Parker’s mind, where after learning that Elvis wanted to record gospel music, he imagined that followed by Presley doing a number set in a whorehouse. Aren’t those two pretty much opposites? Of course, the link between purity culture and racism was addressed in the film, and it’s still very much the case. Overall, I liked it, and found it pretty emotional, especially towards the end.

The theater was giving away a promotional comic for League of Super-Pets, so I took one, and it was pretty cute. Maybe I’ll actually need to watch that movie sometime. There were a lot of previews before the film started, including one for Don’t Worry Darling. Is Florence Pugh typecast as being in movies about cults, or is that just my limited knowledge of what she’s worked on?

1 Response to The Domain of the King