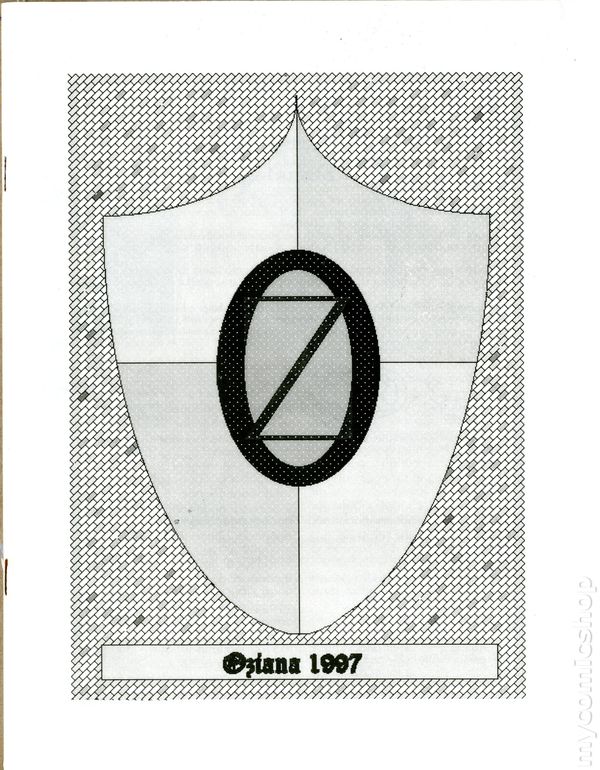 It’s that time again, and here’s the 1997 Oziana. The cover shows an Oz shield that was made to be colored in, but I never did. Original illustrations are sparse this time, and many of them just repurposed John R. Neill pictures from the original Oz books. Editor Robin Olderman mentions that it was difficult to get artists, but then says, “we’ll have to go back to the format used by Oziana many years ago.” I don’t know what she’s talking about there, as while there were reused illustrations in earlier issues, it was never the norm.

“The Forbidden Cave of Grapelandia,” by Frederick E. Otto – This one is a direct follow-up to another Oziana story of Otto’s, “A Cozy Castle in Oz.” It mentioned a cave that Princess Prunella was forbidden to explore. This time, she finally does, along with her mother Myrna and dog Comfort. They get separated in the tunnels inside Big Enough Mountain, and Myrna and Comfort are captured by dragons who want to bring them to the Ruby Imps. The Imps are from Frank Joslyn Baum’s The Laughing Dragon of Oz, and it’s explained here that they left their home after the North Wind attacked, and the Duchess, Prunella’s grandmother, allowed them to stay in the caverns in exchange for teaching her some transformation magic. Once again, the Duke decides not to tell his mother what they found out. This one has original art by Melody Grandy, but several of them were themselves later repurposed for Melody’s own Zim Greenleaf, in a part that also has a young princess, her mother, and a sheepdog meeting dragons in a cave.

Following this story is a humorous piece written by Dave Hardenbrook, a parody of typical spam messages of the time, accompanied by a picture of several Oz characters using a PC, including the Wogglebug using a stethoscope on it for some reason.

I remember Dave’s depiction of Glinda was based on Enya, and hence had short hair. Then there’s a word find by Robin that has characters’ names starting with A, B, and C overlapping with the places they’re from.

“The Heart of the Matter,” by Theresa Hogue – I don’t know the author of this one, but I do remember she was profiled in the first issue of The Oz Gazette I ever received back when I first joined the International Wizard of Oz Club. In this tale, the Wizard of Oz has found a way to turn the Tin Woodman back to his old flesh-and-blood self. The Wizard is very excited about it and tries to rush into it, while Nick Chopper is more reluctant. He eventually decides to keep his tin form, disappointing the Wizard, who’s kind of pushy here. Interestingly, Karyl Carlson’s “Dollmaker” from a few years earlier has Nick temporarily being disenchanted into his old meat body and not caring for it much. I guess I never really thought that the issue was that he couldn’t be changed into flesh, but that he didn’t particularly want to be. It’s never been made explicit, though. In Forever, Melody has Nick being given the ability to turn from flesh to tin at will, which is a nice compromise, and which Marcus Mebes utilizes in the second part of Haunted Castle. Still, I can’t really imagine writing him as anything other than tin.

“A Generic Oz Story,” by Tyler Jones – This story parodies the recurring elements in a lot of Oz tales, especially fan-written ones, although most of them have antecedents in the original books, especially the Ruth Plumly Thompson ones: a villain trying to conquer Oz, the protagonists running into several different strange and hostile communities, and magical items that grant wishes. I’ve written before about how wishing magic tends to be kind of lazy, but it still gets used a lot in Oz adventures. It’s very silly, but it does make some valid points about overused ideas. The story was later incorporated into March Laumer’s Beenie, where the hero purposely tries not to follow the usual patterns for Oz adventures. This is followed by some unfinished Percy Vere verses by Robin, which are quite reminiscent of Thompson’s general style for the Forgetful Poet. Then there’s a list of Oz-related computer viruses thought up by various contributors to the Ozzy Digest, an email digest that I was pretty active on back when it was around. As such, this was actually my first time in Oziana, with my first original story not appearing until about a decade later. Also represented are Gili Bar-Hillel, Melody, Dave, Jeremy Steadman, Danny Wall, and John N. White. This sort of thing was also representative of the Internet at the time, when fake virus warnings were quite common. I don’t know that they’re as much of a thing these days.

“The Braided Man of Oz,” by Eleanor Kennedy – The title had already been used for a short book by R.K. Lionel, but this is a different story about the same character, who first showed up in Dorothy and the Wizard. When Ugu the Shoemaker casts a spell to make the denizens of the Emerald City unable to hear, the Braided Man’s rustles and flutters cause Button-Bright to laugh at the Patchwork Girl, the only way to break the enchantment. The story takes place before Lost Princess, so no one finds out who was responsible for the magic. The Braided Man is given a medal and a new workshop in the city. I’m pretty sure there are stories that take place later where he’s back in Pyramid Mountain, but it’s possible he commuted between the two with help from Ozma or the Wizard. By the way, the majority of this tale takes place on Ozma’s birthday, which was last Sunday, so it’s coincidentally appropriate. The illustrations for this one are repurposed Neill, and they include a picture of Prince Pompadore, who isn’t mentioned in the story. I suspect it’s just used because there’s a mention of somersaults in the text, but Ozma wouldn’t have known Pompa at this point.

Next time, the Yellow Knight finds some rare gems, Bunnybury is conquered, and Scraps and Kabumpo learn the secret of the royal palm tree (well, one of them, anyway).