Something for the Ruler with Everything 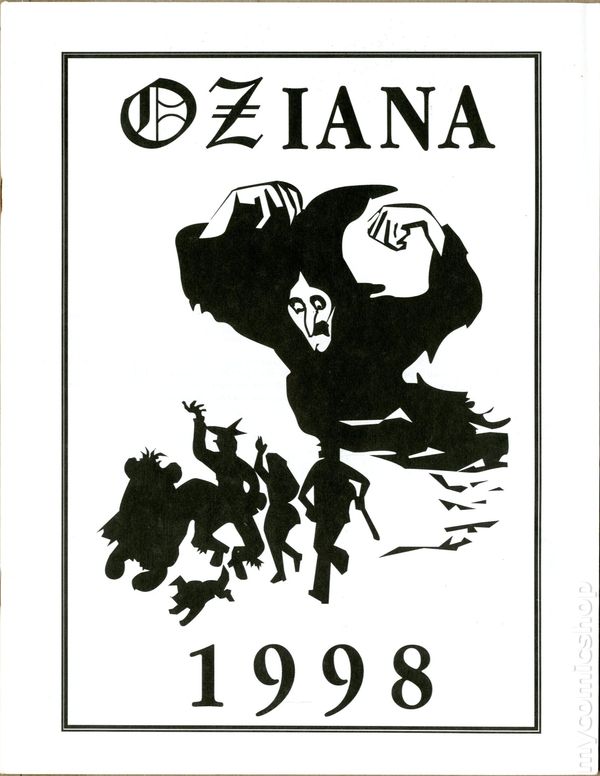 The 1998 Oziana has even less original art than the last issue. Aside from the front cover by Ron Zhang, showing an MGM-inspired Wicked Witch of the West menacing the familiar four (five, including Toto) and a picture of Ozma wearing a headband by Bryan Hollingsworth, it’s all either repurposed John R. Neill or Robin Olderman’s own drawings, or sometimes a combination of the two.

The back cover is an advertisement for the next issue, showing the Scarecrow receiving it in his mailbox.

Regardless, it has some great stories, mostly having fun with familiar characters.

“The Gauds of Oz, by David Hulan – This is a follow-up of sorts to “A Princess of Oz,” as it again features the Wizard’s transportation pills and the helpful woodchuck, but it mostly deals with different characters, and covers a lot of territory for a short story. It starts with the Yellow Knight patrolling the border between Corumbia and Samandra, and finding a cave full of glowing gems called firestones, which are rare even in Oz. Seeking to find a jeweler who can set them, he travels to the Emerald City and hears from the Glass Cat about Joyero, known as the greatest jeweler in Oz. He’s the one who made the Golden Cap for Gayelette and Quelala‘s wedding, and later traded back, then gave the Cap to the Wicked Witch of the West in exchange for the only previously known firestone. Upon learning there are more, he locks up the Knight. He is able to escape and get help from the Wizard of Oz and Lonesome Duck to overcome Joyero’s magical defenses, and finally manages to negotiate with the jeweler. The idea of the four knights who were enchanted in Corabia while courting the Princess and disenchanted during Yellow Knight taking up service to the King of Corumbia makes sense. The titles of this and its predecessor were based on Edgar Rice Burroughs’ first two Barsoom books, and I remember his mentioning he wanted to write one called “Jellia Jamb, Maid of Oz,” although Dave Hardenbrook ended up using that title instead. I understand there’s a comic called Warlord of Oz, which also might work as a title for a manuscript I’ve written. I’ve only read the first three Barsoom books, but looking at later titles, there are a lot of synthetic men in Oz, and maybe Carter Green is enough of a reference to John Carter.

“The Shortest Book of Oz” and “Ozma’s Swap Party,” by Jno. R. Bell – These brief tales were originally written for the Ozzy Digest. The first is a parody, although I guess there’s no reason it couldn’t have actually happened within the Oz universe. Based, if I remember correctly, on some talk about how much shorter Oz stories would be if Ozma used her magic to its full potential, it has a boy being transported to Oz, immediately rescued by Ozma with the Magic Belt, and then sent home. The second story addresses how difficult it must be to keep finding birthday presents for Ozma, with her references the events of The Magic of Oz, as well as a presumably unwritten adventure where Sir Hokus goes to a place called Fremmely to gather dragons’ teeth. He wasn’t planning to give Ozma Spartoi, was he? But anyway, the Ruler instead suggests everyone bringing a small gift and swapping with each other. John does a good job of capturing the characters, especially Scraps, who is vocally annoyed at ending up with metal polish. Many of the participants end up with the same things they brought, but they all have fun. These stories are followed by a logic puzzle by Mike Turniansky, whom I remember as a frequent Digest contributor. I thought I’d remembered hearing that he’d died, but I might have him mixed up with someone else. The puzzle is based on the respective ages of Dorothy, Betsy Bobbin, and Trot, based on brief references in Lost Princess and Giant Horse.

“The Grabbit Rabbit of Oz,” by Robin Olderman – The editor wrote this one, which returns to Bunnybury and has the King learn another lesson besides the one from Emerald City. This time, the bullying Peter the Grabbit Rabbit has stolen the throne, with help from a magical carrot necklace. Dorothy and the Cowardly Lion have to help him stand up to the usurper and start doing things himself instead of always relying on his subjects, which he does with help from some magic Glinda had given him. There are a lot of references back to the original visit to Bunnybury.

“Kabumpo Finds a Frond,” by Atticus Gannaway – I think this might have been Atticus’ first Oziana contribution, although he’d previously written a few Oz books. It deals with the royal palm tree from Land, for which the penalty for removing leaves was to be killed seven times and then imprisoned for life. When the Tin Woodman tells a visiting Kabumpo about this, the elephant avoids the tree, but resolves to talk to Ozma about the excessive law. When he accidentally knocks off a frond in a confrontation with the Patchwork Girl, they find it bears a warning about Ozma vanishing. Much to Kabumpo’s annoyance, he and Scraps have to team up to prevent this from happening, only to find out in the end there was really no danger. It’s an interesting explanation for a mysterious statement from an early Oz book. In terms of continuity, I’m not sure how well it fits with Dennis Anfuso’s take on the palm tree in Astonishing Tale of the Gump, but maybe there’s a way to fit them together.

The issue ends with some anagrams, and it looks like I never solved them.

Next time, Oziana goes to the dogs. Well, one dog, anyway.

2 Responses to Something for the Ruler with Everything