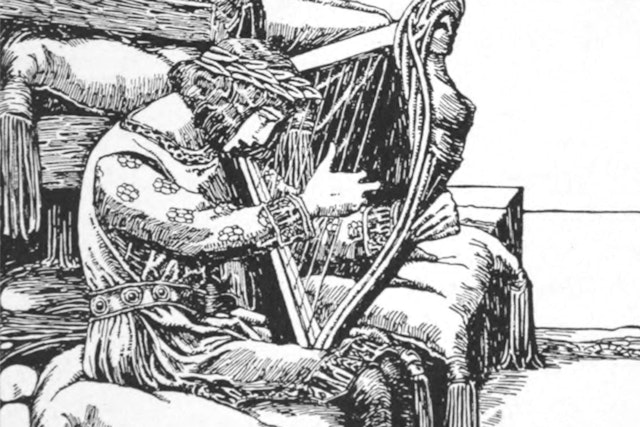 I don’t think I’ve said that much about the legendary bard Taliesin, although I’ve come across him when researching other British mythology. I tend to subconsciously associate him with Tam Lin and Thomas the Rhymer, I guess because they’re also bards from the British Isles with names starting with T, but I don’t think there’s any direct connection beyond that. I’ve read the Book of Taliesin, a collection of poems attributed to this man, and it seems that the general consensus is that they were written in the sixth century. Well, at least some are; others might well have been written by later authors who thought of themselves as working in Taliesin’s tradition. Several of them praise King Urien of Rheged, a kingdom consisting of parts of northern England and southern Scotland. There are accounts of different battles, songs about characters and situations from the Bible, and some more legendary tales.

One of the latter is the Cad Goddeu, or Battle of the Trees, which tells about enchanted trees serving as an army to the magician Gwydion. 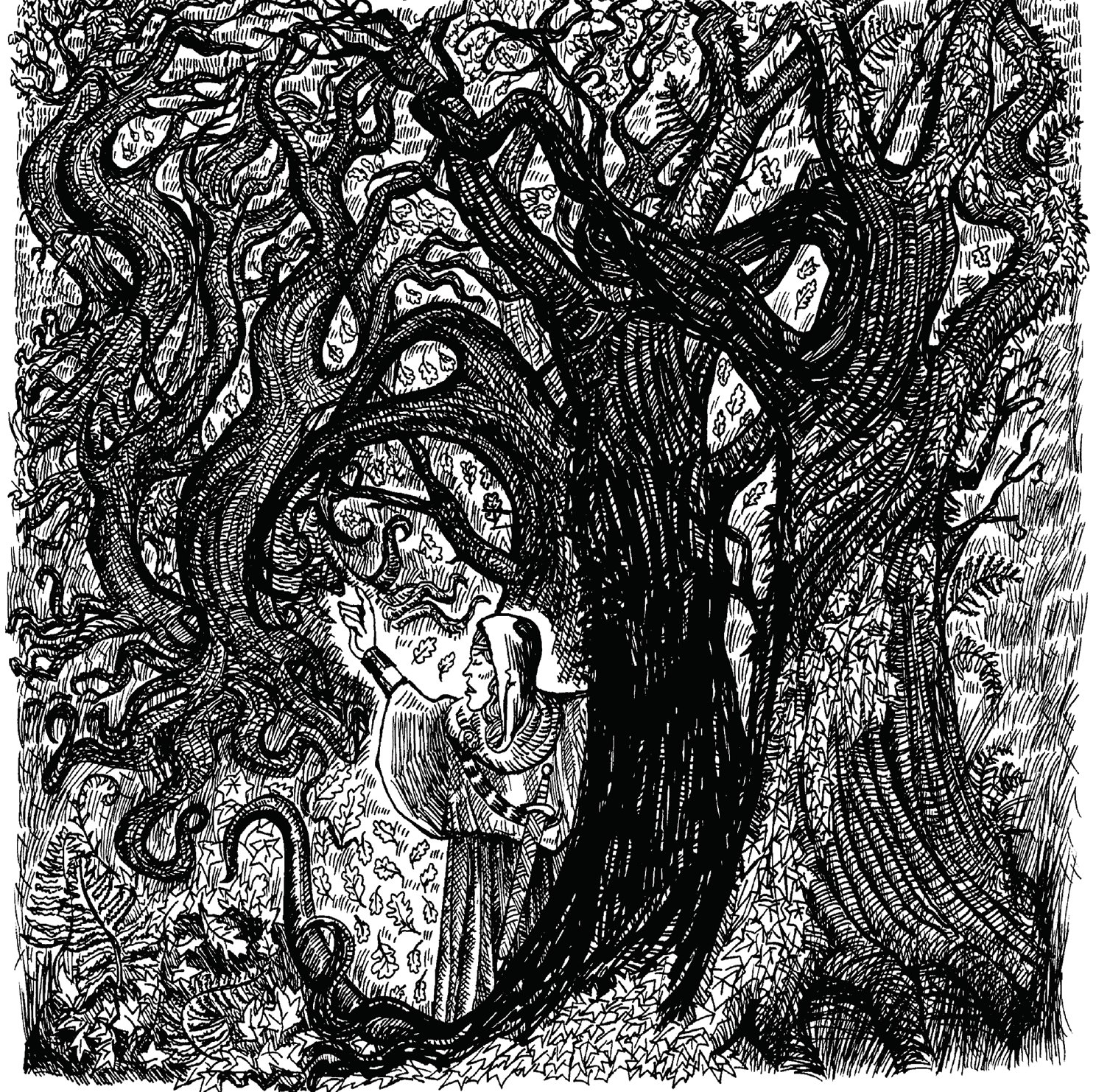 Picture by Mark Wigan
Much of it is a list of types of trees and how they each contribute to the fight, and I’ve seen attempts to link this with the Ogham alphabet. While the reason for the battle isn’t mentioned by Taliesin, it’s elsewhere said to have started when Gwydion’s brother Amaetheon stole a deer and a puppy from Arawn, Lord of Annwn, the Celtic world of the dead. The magician enchants a bunch of trees to fight Arawn’s forces, and also successfully guesses the name of Bran, one of the Lord of Annwn’s most powerful troops.

While Taliesin might well have been a real person, he seems to have been mythologized pretty early on, and he’s even sometimes considered a god of sorts. A well-known account of his life holds that he was born twice, first as Gwion Bach ap Gwreang, who was a servant for the enchantress Cerridwen. 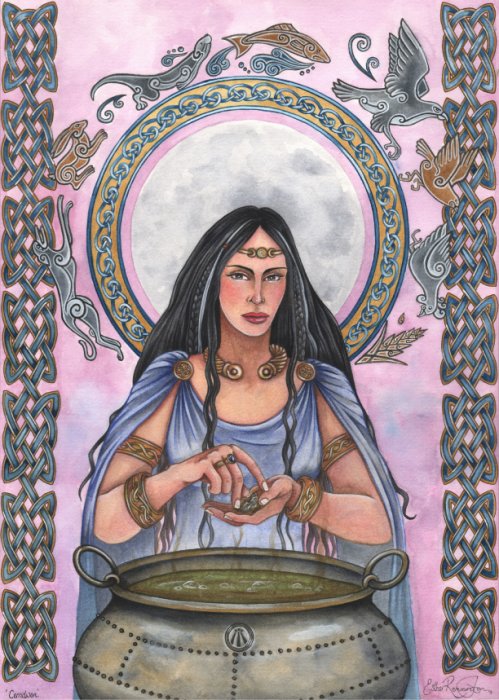 She was married to a giant, and they had two children, a beautiful daughter named Crearwy and a hideously ugly son called Morfran. While Cerridwen was unable to make Morfran attractive, she did try to make it up to him by brewing a potion to grant him wisdom and poetic inspiration. She had Gwion stir the potion for her, but he spilled a few drops on his thumb, which burned him. When he put his thumb in his mouth, he became a great poet, also gaining prophetic and magical abilities. There’s a clear similarity to the story of Fionn mac Cumhaill and the Salmon of Wisdom. Cerridwen was angry at him for drinking the potion, despite it being an accident, so he changed himself into various forms to try and escape her wrath. When he finally turned into a grain of wheat, Cerridwen ate it, but that caused her to become pregnant with Gwion in baby form. She placed him in a leather bag and threw it in the water, the bag then being caught by the incredibly unlucky Welsh Prince Elffin ap Gwyddno, who was trying to catch some fish. 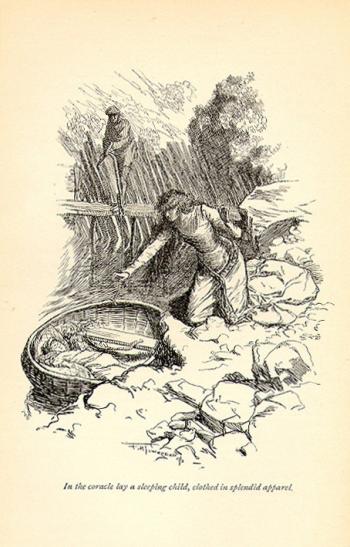 I guess sometimes it was a boat instead of a bag. There are always variations.
He also had a large estate that was destroyed by flood. Elffin named the boy Taliesin, meaning “radiant brow,” and despite being a baby he was already composing verses. After that, Elffin became a careless braggart, and his son had to repeatedly bail him out. The name Elffin might mean “bright cliff” or “bright rock.” I don’t think it’s directly related to elves, but there’s probably an etymological connection.

The bard served at several royal courts, including that of King Arthur. This makes a certain amount of sense, as Geoffrey of Monmouth placed Arthur’s reign in the sixth century. But he’s also sometimes said to have worked for Bran the Blessed, who is said in at least some sources to have lived before the Roman conquest of Britain, centuries before Arthur. But then, part of the Cad Goddeu has the author mentioning that he’s taken many forms and witnessed many different historical events. Taliesin appears in Lloyd Alexander’s Chronicles of Prydain as the bard who gave Fflewddur Fflam his magical harp that breaks when he tells a lie. 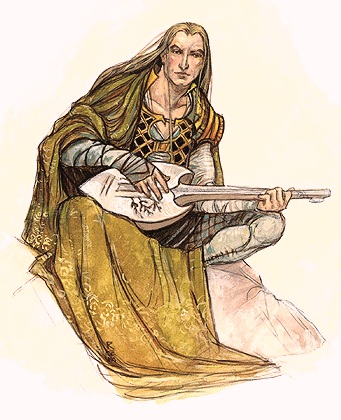 Taliesin is sometimes associated with Merlin, as they’re both magicians and prophets who served King Arthur. The Welsh character Myrddin was a bard, but this aspect of his character doesn’t seem to have lasted. Of course, bards having magical powers is pretty common in mythology; the Finnish Vainamoinen and Greek Orpheus both come to mind. And I know bards who work magic are standard in fantasy role-playing games.