Anne of Green Gables, by L.M. Montgomery – Beth wanted me to read this, and let me borrow her Reader’s Digest edition, which does have the entire text. It took me way longer to read this than it probably should have because of my method of switching between things. All I really knew about it was that it was about a Canadian orphan girl. On Prince Edward Island, the straight-laced Marilla Cuthbert and her quiet brother Matthew want to adopt a boy to help out on their farm, but due to some kind of mix-up, they end up with a girl instead. Anne is very imaginative and, at least at first, straightforward and literal even when it’s not to her advantage, which I can identify with. She also hates that she has red hair, which really shows how things change over time. A boy in her class makes fun of her for it, but then becomes fascinated with her, because that’s how everyone reacts to Anne to some extent. And the “he teases you because he likes you” idea is still around today. It’s always fascinating to see what was considered radical in a certain time and place, like how Marilla initially refuses to make Anne dresses with puffy sleeves, as is the fashion. It was also interesting that Marilla was a staunch Conservative, while the town busybody was a Liberal, although I don’t actually know what those parties believed back in the days. But then, I also sometimes feel that way about what some people find extreme even today. As far as relationships go, there was a fair amount of focus on Anne’s hatred of Gilbert that gradually changes to a friendly rivalry, I thought her relationship with her best friend Diana bordered on romantic, at least from a modern standpoint. It made me think of how people who read the Oz books today think of Dorothy and Ozma as a gay couple, and while I have no problem with that interpretation, it also kind of just seems to be how young girls interacted with their female friends back then. I have to wonder if Little Orphan Annie, also a spunky redhead, was influenced by Anne Shirley, although I haven’t seen any evidence of this. Anne of Green Gables didn’t have a dog, but she did have pupils. Also, this comic showed up around when I was finishing up the book.

So that was a weird coincidence. 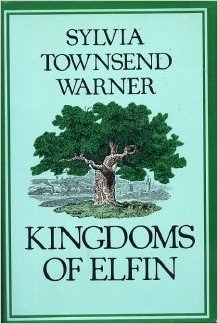 Kingdoms of Elfin, by Sylvia Townsend Warner – I believe it was in junior high that I first started reading this, but, as with so many other things, I set it aside for a long time. It’s something I learned about from The Dictionary of Imaginary Places. This collection of short stories describes the various fairy courts of Europe, who call to mind human royalty and nobility taken to an exaggerated degree. These fairies, while mortal, live for centuries, and many of the inhabitants of the court are idle rich folk who dedicate themselves to various hobbies and passions, like travel abroad, capturing human children, and hunting with a pack of werewolves. Warner also comments on the belief that fairies have no souls, which colors their attitude toward religion. It’s also a very class-conscious society, where even though all fairies have wings, it’s not considered proper for the upper classes to fly; that’s for servants. The tales are kind of slow, but interesting and poetic in style, with the sense of being historical studies. There are also a lot of references to folklore and mythology, as you would probably expect.

The Perhappsy Chaps, by Ruth Plumly Thompson – This was Thompson’s first published book, from 1918, a few years before she took over writing the Oz books. Indeed, according to what I heard at the last OzCon, there’s a surviving fan letter she wrote to L. Frank Baum around when it was published. It’s a book of verse about the titular Perhappsies, a sort of tiny fairies who go around spreading happiness and cheer. They journey from their home at “the very edge of the world” to the United States to do good deeds. Arthur Henderson did the illustrations, and they’re very much of their time. One of the tales is a pretty direct reference to the story of the Shoemaker and the Elves, with the Perhappsies doing work for a cobbler overnight. Another has them finding lost umbrellas, a recurring theme in Thompson’s work. In addition to the stories of the chaps helping people, there are also some that just have them fooling around in parks and gyms and such. Like a lot of Thompson’s work, it comes across as a little overly precious. Towards the end of the book, she starts to introduce some more fantastic elements outside of the Perhappsies themselves, like a town of mice and bandits being turned into blackbirds. One unfortunately but absurdly racist verse has a giant kidnapping a “white and fat” baby from Philadelphia for his wife. The giants live in the South Seas but speak Japanese, or at least that’s what we’re told. Anyway, the Perhappsies switch the baby with a pig, but the giants are okay with raising it as their child. The book I have isn’t in great shape, but I’m glad I finally got to read it. About ten years ago, David Maxine had started to serialize the collection on his Hungry Tiger Talk blog, but for whatever reason, it didn’t get very far. The author wrote some other verses about these characters that aren’t included in the book, some of which appear in the International Wizard of Oz Club’s two collections of her work. They’re not all that interesting on their own, but they are in the sense that they continue Thompson’s general trend of playing on words denoting uncertainty.

8 Responses to Fraternizing with Fairies