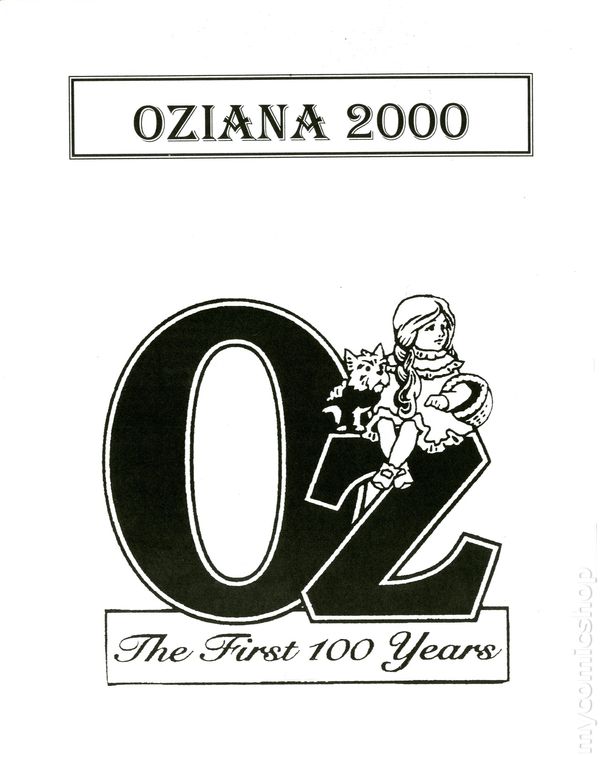 The 2000 Oziana has some fun stories, but a dearth of illustrations, pretty much just using repurposed John R. Neill art. The cover is an exception, but it’s just the standard logo that the International Wizard of Oz Club used for the centennial of The Wonderful Wizard of Oz. Another picture combines Neill’s Percy Vere with Robin Olderman’s picture of herself.

That one accompanies the first piece in the issue:

“Oz, the First 100 Years,” by Percy Vere and Robin Olderman – The editor brings back Ruth Plumly Thompson’s Forgetful Poet for some verses extolling the virtues of Oz, including Percy’s famous missing rhymes.

“The Invisible Fairy of Oz,” by Frederick E. Otto – Another posthumously published Otto story, which I believe might be the last of his work to be published in Oziana, although I could be forgetting something. As is usual with his tales, it combines elements from several of the original books into a new plot. Faleero is back and plotting with her three identical ladies-in-waiting to once again take over Pumperdink, this time by holding King Pompus’ granddaughter Pajonia for ransom. They’re staying at an abandoned herbalist’s shop in the Emerald City, and Pastoria stumbles upon it while trying on the Flying Cloak of Invisibility from Gnome King, which Jellia Jamb has taken to the former king’s tailor shop for repairs. Faleero steals the cloak and locks up Pastoria, but he manages to get help with his flying ears. This is technically a contradiction, as the disenchanted Pastoria says in Lost King that he has normal ears. But then, if L. Frank Baum can casually give back the Glass Cat’s pink brains, why not? Incidentally, this story ends with Ozma sending Faleero and her cohorts to Burzee, while a story I wrote before reading this had her banished FROM Burzee TO Oz. So I guess Ozma is extraditing her. The two-tailed cat Two-two isn’t specifically said to be Tattypoo‘s pet from Giant Horse, but it would make sense. There’s also an indication of the rivalry between Jenny Jump and Pastoria (mostly on the side of the former) that writers who follow up on the Thompson and Neill books tend to assume would have developed.

“Ozma Fights the Sniffles,” by J.L. Bell – When Button-Bright catches a cold, Ozma, who is unfamiliar with sickness, overreacts and comes up with some bizarre notions based on misinterpretations of what other Americans tell her. Finally, the Wizard of Oz uses some hokum to convince Ozma that the boy has been magically cured. Whether people get sick in Oz is something for which we have contradictory evidence in the series, but it’s definitely rare, so I have no problem with the premise even if Button-Bright wasn’t the first sick person in Ozma’s court. Actually, didn’t Ozma have the ague when she was Tip? The story has faithful characterizations, and anyone interested in the palace’s floor plan might be interested to know that Iva, the kitchen boy who’s tormented by Matiah in Wishing Horse, has his room right above Button-Bright’s.

“The Marvelous Menagerie: A Centennial Oz Story in 100 Haikus,” by Atticus Gannaway – In commemoration of the Centennial Convention, this piece written in haiku format has Toto and Pigasus visit the festivities. The pig wins the costume contest, even though the attendees later find out that he isn’t actually wearing a costume. Hey, I was at that convention, and I don’t remember that happening! I did dress as Pigasus for a convention back in the nineties, though; and my Kabumpo won a prize at the centennial. In a clever touch, the verses only rhyme when Pigasus is involved.