We’ve started watching horror movies for the spooky season. We watch horror at other times of year, too, but around now Beth likes to focus on them to the extent of anything else. Not that we’ve been watching all that many films as of late anyway. There are SPOILERS for all three movies covered here, although I don’t know that people would be watching any of them for plot twists. 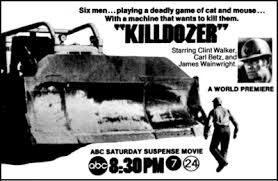 Killdozer – Beth said she’d heard about this one from a Thanksgiving special on the Hellbent for Horror podcast where they, appropriately enough, discussed turkeys. This 1974 made-for-television movie certainly was one, although she showed it to me because I had an interest in construction equipment when I was really young. Most of this is just what my parents told me, but back when I was a toddler, we lived across the street from where they were building new houses, and they would take me on “tractor walks” where every time I would throw a handful of dirt in the bulldozer. Anyway, the movie is apparently based on a novella from 1944, which gives much more back story. A few construction workers are building a base camp for an oil rig on an island off the coast of Africa, and discover a glowing meteorite. Their bulldozer comes to life, and, as the title suggests, starts to kill people. The only two remaining workers manage to electrocute the bulldozer, which removes the animating force. There’s not that much to it, but the name definitely seems to have made an impact. A proto-grunge band named themselves after the movie, and while I don’t know their music, they are referenced in a Young Fresh Fellows song, “My Boyfriend’s in Killdozer.” It’s a pretty direct account of a time when the bartender at a club where the Fellows were playing was dating a guy in the band Killdozer, and wouldn’t stop talking about it. And in 2004, a guy in Colorado named Marvin Heemeyer tried to protest rezoning by covering a bulldozer in armor and using it to destroy a bunch of buildings, which ended when he somehow got trapped in a hardware store and committed suicide. Not only was this called the Killdozer rampage, but a Google search for “Killdozer” lists this before the movie, and the novella and the band don’t even make the first page. I think I’ve said more about other stuff than the film itself, but I guess that’s okay.

Sorority House Massacre – I think Beth had heard of and recently mentioned either this or the next movie, since it’s difficult to tell them apart from their titles. They’re both low-budget slasher films from the eighties. You get no points for figuring out where this takes place, but there is a little bit of a twist in that the sorority pledge who’s the main character keeps having visions of the killer, and it turns out he’s her brother who had been committed to a mental institution. It’s nowhere near as much of a T&A kind of film as I would have suspected from the title. There are some naked breasts, but they’re shown in the context of the girls playing dress-up. And while there’s some discussion of sex, I don’t think it even happens off-screen. As Beth (my wife, not the character in the movie) pointed out, the girls actually take their schoolwork seriously, too.

The Slumber Party Massacre – The story here involves a high school student who has a slumber party for her friends on the girls’ basketball team, but it’s interrupted by another escaped mental patient. This killer isn’t related to any other characters, at least as far as we know; and his most notable characteristic is that his murder weapon of choice is a power drill. Beth commented that, based on the titles, she would have thought this would be less raunchy than Sorority, but it showed boobs way earlier in the film, and a girl’s boyfriend is trying to cajole her into having sex in his car. Nothing that far removed from a lot of other slasher movies, but kind of surprising in comparison. Early on in the film, the girls talk about each others’ breasts while in the shower, which made me wonder whether this was written by a man, but I believe both the writer and director were women. It was, however, originally written as a horror comedy but with the humorous elements downplayed in the end. I just noticed in a review that it tends to focus on girls sexualizing boys, when the reverse is obviously much more common. Beth mentioned that she liked the music in this movie, and we both noticed how much sugar the one girl used when she was making Kool-Aid. There were two sequels and a remake for this one (the title for the latter missing the definite article at the beginning), and Sorority also had two sequels. And to make things even more confusing, there’s a 2012 movie called Sorority Party Massacre.