As I said last week, I’ve already written about the 2003 Oziana across two posts back when it was new, and I still agree with what I wrote. I didn’t go into much detail, though, so I’ll examine it a little more closely now. The cover was drawn by Melody Grandy and colored by Marcus Mebes, and shows several characters who appear within the issue, including a few new ones.

“The Bashful Baker of Oz,” by Kieran Miller – As I said before, this tale is focused on Ozites who aren’t part of Ozma’s court or people who get swept into an adventure, but rather some more ordinary types from the Gillikin town of Crafton. Everyone there is encouraged to pursue a specific craft, but Maria and Derek feel they don’t really belong. Maria does her job as a baker quite well, but even her own family thinks she’s kind of weird, and she figures the Craftonites only like what she can do for them. Derek has talent as a fashion designer, but that isn’t considered a real craft by the other villagers. So he relocates to the Emerald City and works for Jenny Jump, but also lives a double life as a mysterious man named Luka who visits his old home to see Maria, his childhood crush. The two strike up a romance, but Derek eventually has to come clean when Maria realizes his story doesn’t hold up. Comic artist Luciano Vecchio illustrated this, and has done other Oz work since then.

The back cover uses a picture from this story of Maria meeting Omby Amby, again colored by Marcus.

He later published this one in book form with an extra illustration of Derek and Maria, but a quick review shows that the text is essentially the same, aside from not mentioning Jenny by name. The two Craftonites are in the back on the front cover. They also reappear in The Royal Explorers of Oz, having their honeymoon on the Crescent Moon.

“Tik-Tok’s Transformation,” by Jimm Phillips – While Tik-Tok can think, speak, and act, he’s very forthcoming about the fact that he isn’t alive. The topic came up on the Nonestica email list about what would happen if he were magically brought to life, and this story addresses that concept. Eureka gets mad at the mechanical man for almost sitting on her, causing her to accidentally break a statue and get blamed for it, and considers using the Powder of Life on him in revenge. While she thinks better of it, she spills the Powder anyway, turning Tik-Tok into a flesh-and-blood man, interestingly rendered by Vecchio.

That’s not exactly how the Powder tends to work in other cases, but the copper man might be a special case. What’s disappointing is that the story says very little about Tik-Tok trying to deal with his new form, instead focusing on Eureka trying to turn him back. This one mentions a Scalawagon, and isn’t clear on how Ozma has some of the Powder of Life in her palace when the impression given in other books is that all that Dr. Pipt made had been used up. In fairness, though, we don’t know for that sure. As the center spread, which ended up being in the middle of this story (well, technically more towards the beginning), is Lee Theriot and Dick Martin’s game Oz Quest, which was never officially made. The instructions are partially based on Randy‘s quest to prove himself worthy of the throne in Purple Prince, each player having to accomplish four tasks before they can reach the Emerald City and win. It’s pretty simple, but includes a lot of different references, and is very much in Martin’s style.

“Dr. Byz Zaar in Oz,” by Daniel Gobble – A hypnotist comes to the Emerald City, allegedly just to put on a show, but turns out to have much more sinister goals in mind. Based on the description and the illustrations by Linda Medley, it’s pretty obvious he’s up to no good, but I guess we can’t fault the Ozites for not realizing this.

The Wizard of Oz does suspect him immediately, as he has experience with being a conniving showman. In order to free Ozma from her trance, Dorothy recruits the help of Zaar’s assistant, an unwilling owl named Fanto, who is shown flying over the Shaggy Man’s head on the cover.

On the subject of Oz, I attended a lecture and panel discussion at the Grolier Club last night, featuring Michael Patrick Hearn, who was responsible for The Annotated Wizard of Oz.

He gave a presentation on the different stage and screen adaptations of Oz, and while I already knew most of the information, he did have some interesting personal accounts. After that, he was joined by Stephen Schwartz, composer of Wicked and other musicals; Bert Lahr’s daughter Judy; Gabriel Gale, who wrote the Ages of Oz books; and Margaret Hamilton’s grandson Scott Meserve.

Judy mentioned how her father was very critical of his own performance, but when they watched the MGM movie together late in his life, he said it was good but Ray Bolger was a ham. Apparently Hamilton didn’t get along well with Bolger either. Schwartz talked about how he was sold on the idea of Wicked before actually reading Gregory Maguire’s book, so he read it with a mind on his adaptation, and what he would and wouldn’t use. Victoria Calamito from the Oz Vlog asked about how a pretty dark book ended up becoming a generally family-friendly musical. He also praised Yip Harburg, and said that he was influenced by Harburg’s tendency to invent new words for his lyrics. I still haven’t seen Wicked. I can’t say I was that excited by Maguire’s book (although I’ve read the sequels, so it’s not like I hated it either) or the soundtrack, but it’s also the sort of thing I feel like I should see, and a lot of people love it. I also bought a copy of Gale’s The Art of Oz, which has new interpretations on the classic characters. 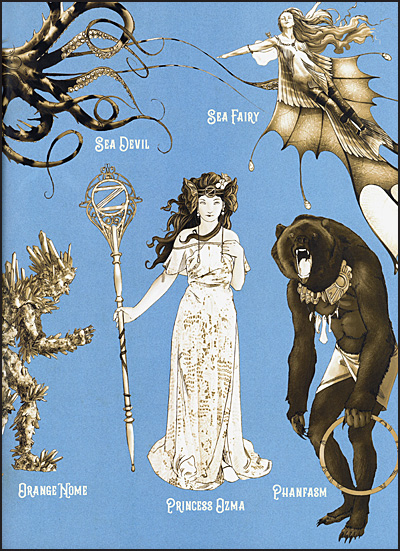 I’ve looked through it, but I haven’t examined it thoroughly yet. I am interested in the Lahr biography that Judy was selling, written by her brother John; but I didn’t want to spend that much money.

If I’ve written about the 2004 Oziana already, I can’t find it. So I guess it will be business as usual next time, but with a new editor for the magazine. We’ll see the Glass Cat foil a kidnapping and Dorothy try to rescue a Prince of Ev from the Nome Kingdom without realizing he went there willingly. I’m also rereading another apocryphal Oz book, and while I haven’t finished yet, it’s pretty short. So that might be coming, if not next week, at least in the near future.

15 Responses to Crafts and Cons