‘Tis the Voice of the Plumber

After the trailer for the new Super Mario Bros. Movie dropped, there were a lot of takes on Mario’s voice, as performed by Chris Pratt. I don’t really know that we get enough of it to judge it. It seems like he’s going for a slight New York accent, but not going all out. I’m not big on commenting on trailers in general. We have no idea on how the bits in it are going to fit together, or even if they’re all going to be IN the finished product. That said, I do like the look of it, which is important in something like this. A lot of people don’t like Pratt in general, probably mostly because of his belonging to a creepy evangelical church, although I guess that shouldn’t matter too much as long as he doesn’t try to force his beliefs on other people. His last name probably also doesn’t help. But a lot of the complaints aren’t even about Pratt in particular so much as they are that Charles Martinet, the official voice of Mario, wasn’t doing it. 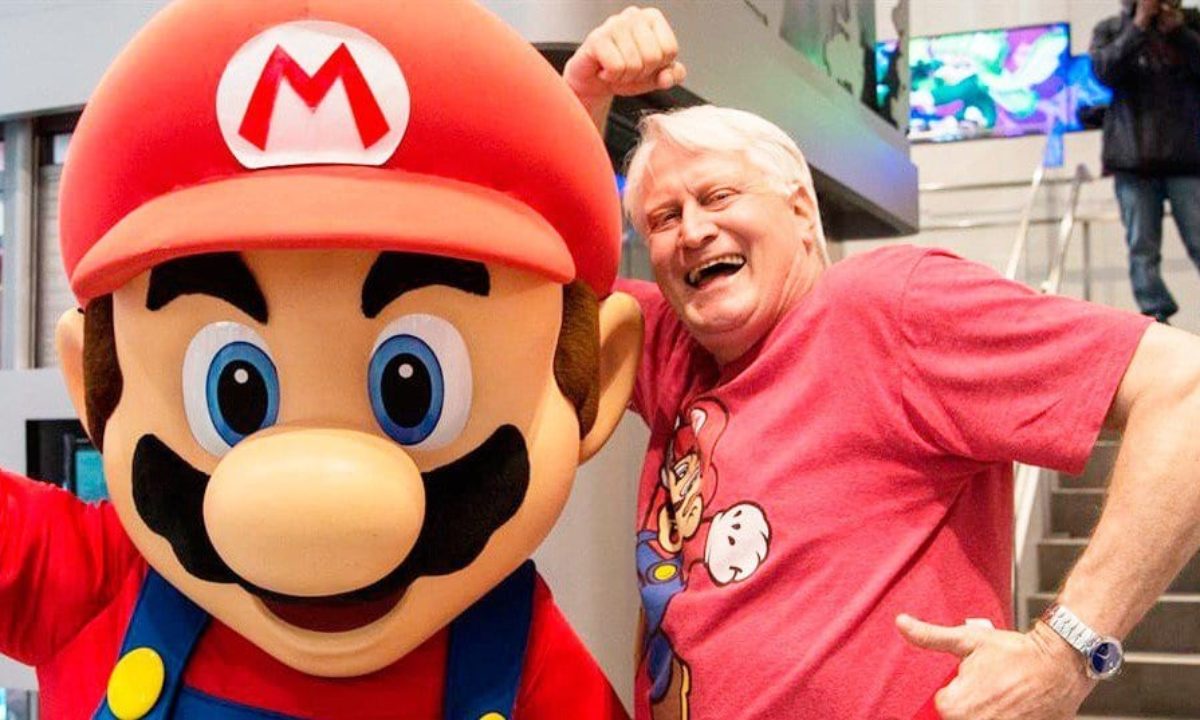 I understand he has a cameo in the film, and he does appear in the credits, but that’s it. Some arguments I’ve seen are that they wouldn’t want to hear him just going “Yahoo!” throughout, and that Martinet’s voice isn’t as vibrant as it used to be. This has been countered by saying he’s a professional voice actor, that he has done much more involved conversations as Mario than what you can hear in the games, and that he could easily change it up to make it more bearable for a long period of time. I do agree that voice actors don’t get a lot of respect, and that a lot of animated movies these days do stunt casting to get famous names into the mix. I kind of think it would make more sense to have the celebrity cameos for less significant characters, but it’s often the reverse.

I saw a link to this article on Twitter, and I don’t particularly buy the argument that Mario has never really been a character. I suspect this is just one of those articles that sites like these crank out because they’re more concerned with having regular content than whether there’s any significance to any of it (and I suppose I do that myself to some degree), so there’s no reason to take it too seriously, but I did think it wasn’t entirely fair to gloss over previous instances where Mario did have a regular speaking role. It says, “Since a run of fairly anodyne cartoons in the late 1980s and early 1990s, and the infamous misfire of the 1993 Bob Hoskins-starring Super Mario Bros. film, making stories about Mario has rarely been attempted.” While it’s true that, despite my nostalgia, none of these were particularly high-quality productions, was it Mario’s voice and characterization that made them bad? If not, that kind of goes against the main point. The animated film COULD give Mario a whole new personality, but there’s no reason it would HAVE to. The Mario & Luigi series is mentioned as a good example of a narrative with Mario as the main character, although of course most of the dialogue in these (aside from a few stock voice clips) is text-based, and it’s others reacting to Mario and Luigi. We perhaps don’t think of Mario as a silent protagonist, since we all know what he sounds like, but he basically fits into this trope for the RPGs. The brothers’ own characterization in these games is shown primarily in animation, and you can’t really do that in a movie.

Okay, they did it with WALL-E, but I don’t think this is the same kind of thing.

I looked a bit into the timeline of voice portrayals of Mario. It seems like the first, at least in English, was by Harris Shore in commercials for Donkey Kong and Donkey Kong Jr., followed by Peter Cullen in the Saturday Supercade cartoons. Shore portrayed the character as a New York Italian-American, while Cullen didn’t seem to be going for a particular accent at all. I guess it hadn’t been established yet that Mario was a plumber (he was a carpenter in DK, and the DK cartoon made him a circus employee), but the sense of his being working-class Italian-American, probably from New York, was already there. That Mario and Luigi were plumbers from New York was established pretty early on by Shigeru Miyamoto, I don’t know whether it was ever as important in Japan as it was here. 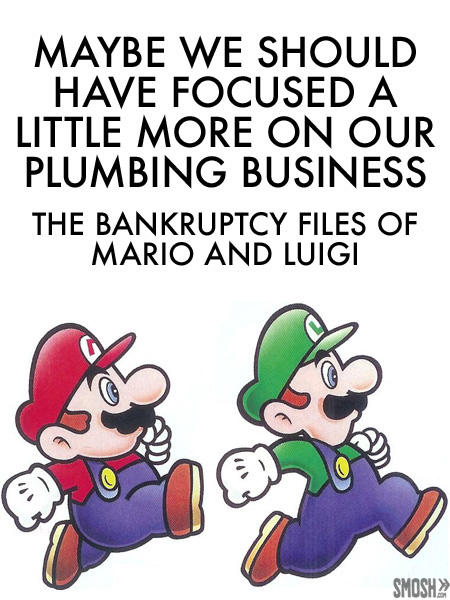 While the 1986 anime movie did show them as coming from our world, I don’t think it specified just where, and they ran a store instead of a plumbing business. Those were the defining traits American media gave to the characters, starting with the Super Mario Bros. Super Show, with Captain Lou Albano, who actually was a guy of Italian ancestry (and born in Italy) from New York City. Danny Wells, who did Luigi, was French Canadian, but still did an Italian-American kind of voice. Walker Boone, who died last year, was a Canadian actor who did Mario’s voice in the other DiC cartoons, with the Italian-Canadian Tony Rosato as Luigi. Boone’s voice had more of a gruff quality to it than Albano’s, but they were going for basically the same thing. The same goes for Marc Graue, who was Mario, Luigi, and Bowser in Hotel Mario. Like the Zelda CD-i games, the characters’ portrayal took a lot from the cartoons, including the obsession with Italian food and the phrase “pesky plumbers.” 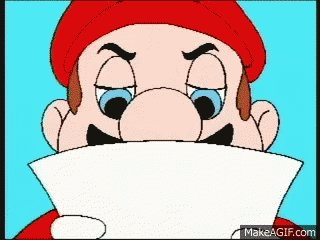 Incidentally, Luigi’s line in the CD-i game about “lotsa spaghetti” is very similar to a bit in the second theme song to Garfield & Friends, and I’ve heard that Pratt is also supposed to voice Garfield. Maybe they couldn’t afford to hire Bill Murray again. 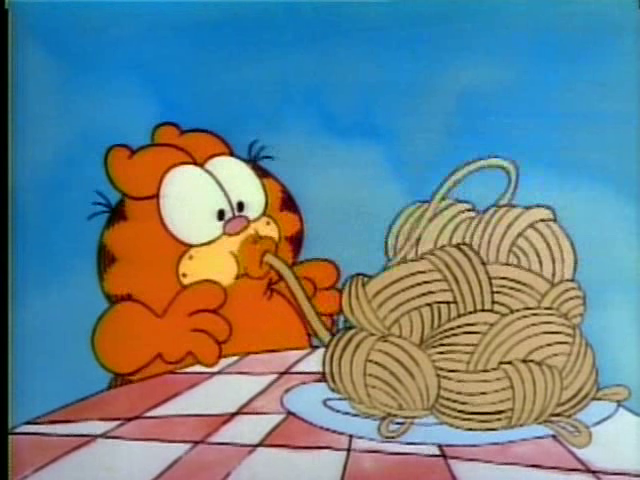 But anyway, while nobody received especially deep characterizations for any of this stuff, Mario and Luigi were both generally friendly and a bit childish, probably largely because of the intended audience; I guess it’s easier for kids to accept adult men as the protagonists when they act kind of like kids. The live-action Super Show segments made Mario slow on the uptake and Luigi a little brighter, while the cartoons had Mario as so obsessed with Italian food that he would sometimes abandon his mission or fall in a trap in order to eat. 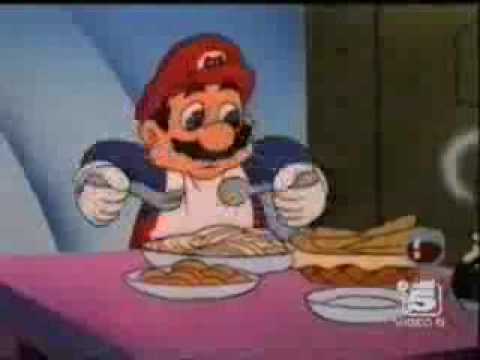 Aside from that tragic flaw, Mario was always willing to help and the one who took charge, even though he was often accompanied by the ruler of a country. Luigi was rather less food-obsessed, but he still talked a lot about pasta. Even their expressions constantly referenced food, plumbing, and Brooklyn. Luigi’s cowardice in the cartoons was something that eventually made it to the games as well. 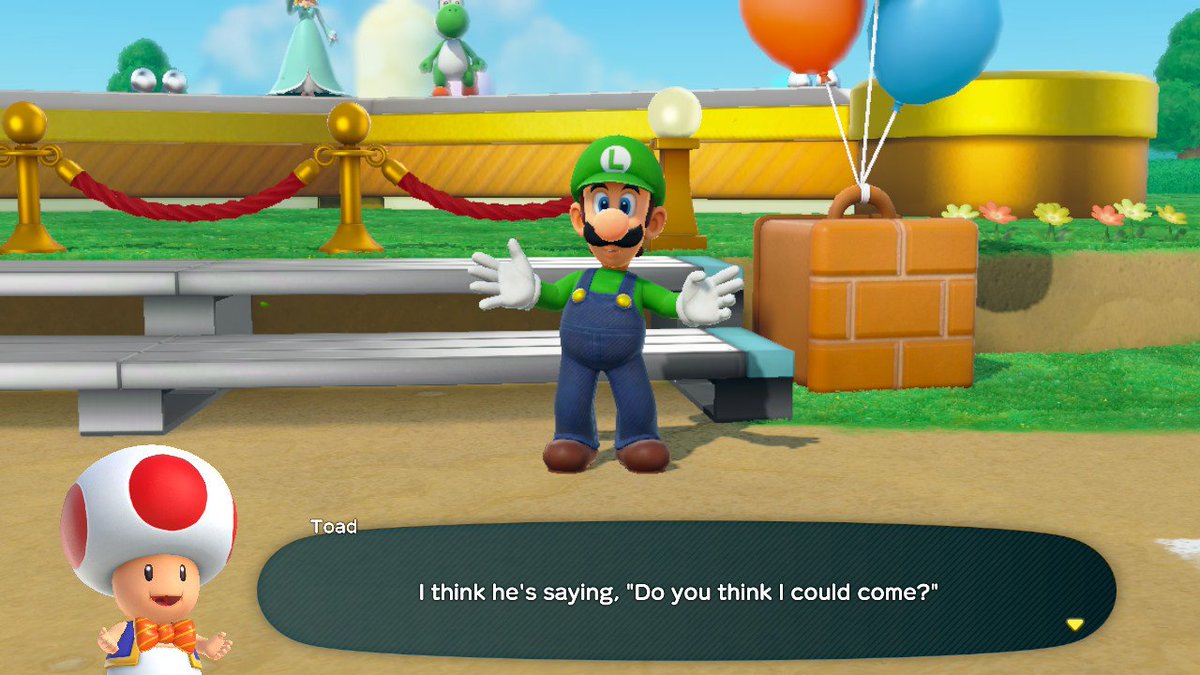 I’ve heard it pointed out that, even before this show, a commercial for Mario Bros. made Luigi the fearful one.

I guess it’s kind of a natural thing that the less famous brother of a hero would have some issues like that. I’m sure his being the one who was kidnapped as a newborn didn’t help. 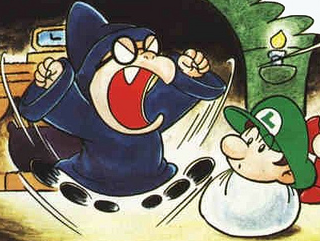 Another trait of Luigi’s that comes up in games and other media is that he’s somewhat jealous of his brother and tends to be overlooked or treated with little respect, but that never seemed to be the case in the cartoons. 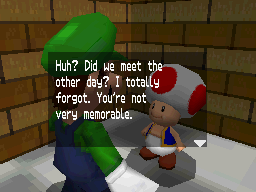 He was always scared, in contrast to Mario’s can-do attitude; but was generally treated as an equal partner. While perhaps not intentional, Luigi seemed to go from actively trying to chicken out to expressing fear but stepping up anyway over the course of the different cartoon series, although I think the SMB3 show was slightly less hammy and reliant on running gags in general. Bob Hoskins in the live-action movie seemed to be largely imitating Danny DeVito, whom I believe was an earlier choice to play the role, but also sounds a lot like his hard-boiled private detective character Eddie Valiant from Who Framed Roger Rabbit. So he was kind of a grouchy Mario.

Charles Martinet apparently tried the gruff Brooklyn voice at his audition, but when it didn’t work, he went for the more familiar one instead. He did the voice of Mario as early as 1992, but his first game appearance was Mario Teaches Typing in 1995, and even then he didn’t do it on the DOS version; that was Ronald B. Ruben.

In an interview, Martinet mentioned how he changed some of the dialogue so that Mario wouldn’t be saying no to kids. I suppose the most notable traits Martinet brought to the character were the stronger Italian accent, including adding “-a” to the ends of a lot of words; and the relentless positivity. That’s not to say that Mario wasn’t positive in other portrayals, but he could still be kind of grumpy. Martinet’s Mario is pretty happy-go-lucky, even his failures rarely resulting in anything more severe than a simple “oh no.” But that doesn’t mean Martinet isn’t capable of showing other emotions with the voice, or for that matter that an always-cheerful hero couldn’t work for a film.

1 Response to ‘Tis the Voice of the Plumber