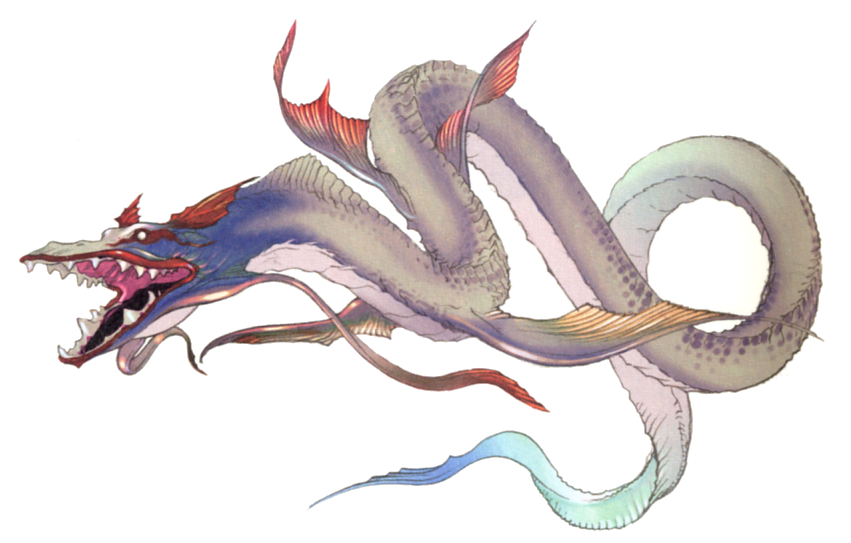 I’d been meaning to discuss Leviathan a little more, which I think was inspired by the name being used for the base of the rebel organization Astrea in Cosmic Star Heroine. Considering all the other references to classic games, I had thought it might have something to do with how you go inside of Leviathan in Final Fantasy II, but I don’t think it’s that specific. The term is used to mean any kind of sea monster, or sometimes even monsters not associated with the sea.

Leviathan is described in the book of Job as having thick scales that no known weapon can pierce, a spiky underside, and fiery breath. 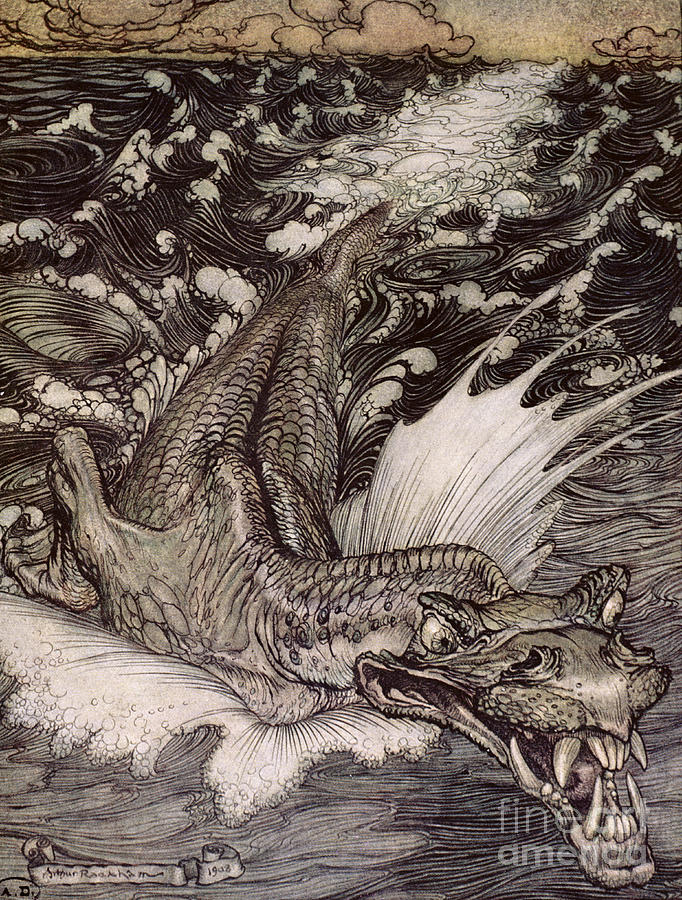 And in Psalms, he has multiple heads. 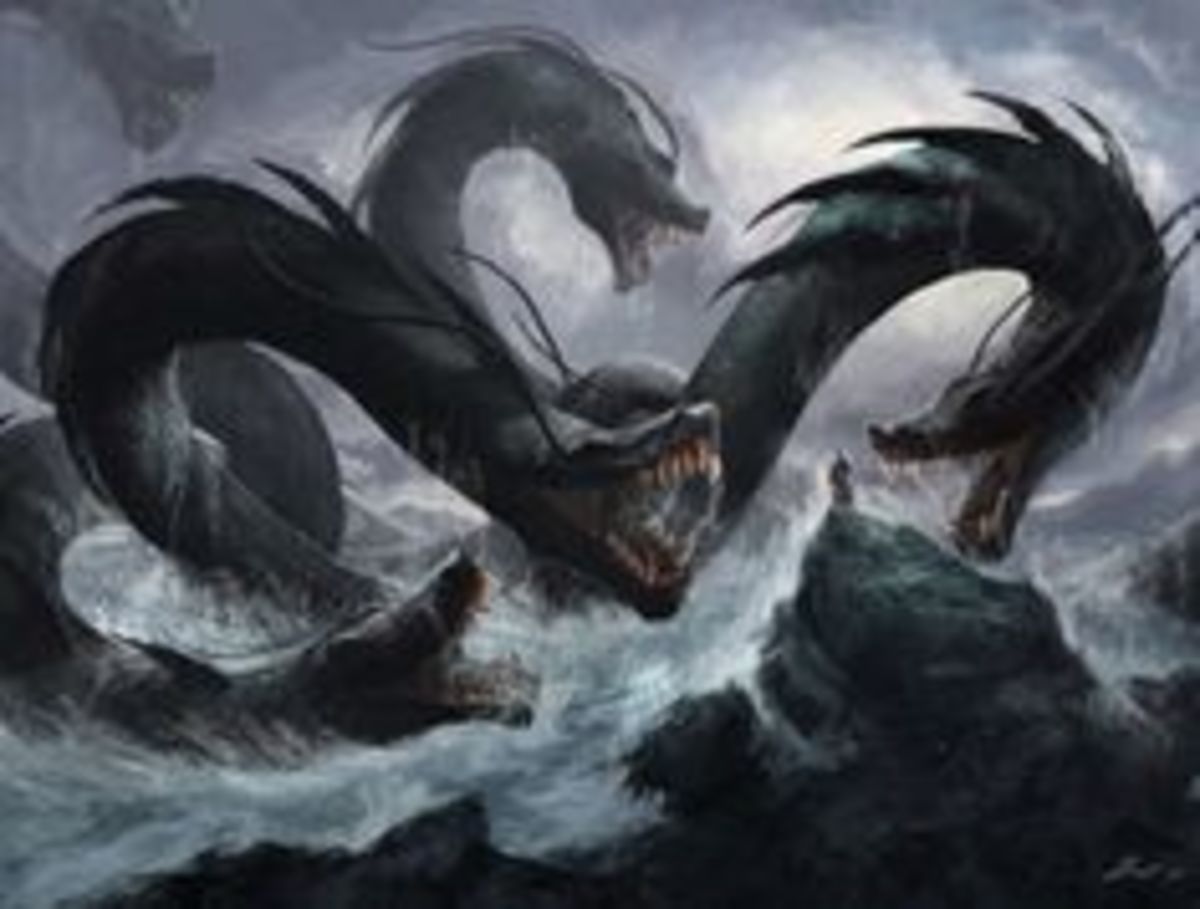 In Christian tradition, Leviathan came to be the name of one of the Princes of Hell, representing the sin of envy. I’m not sure what jealousy has to do with a sea serpent, but there you go. 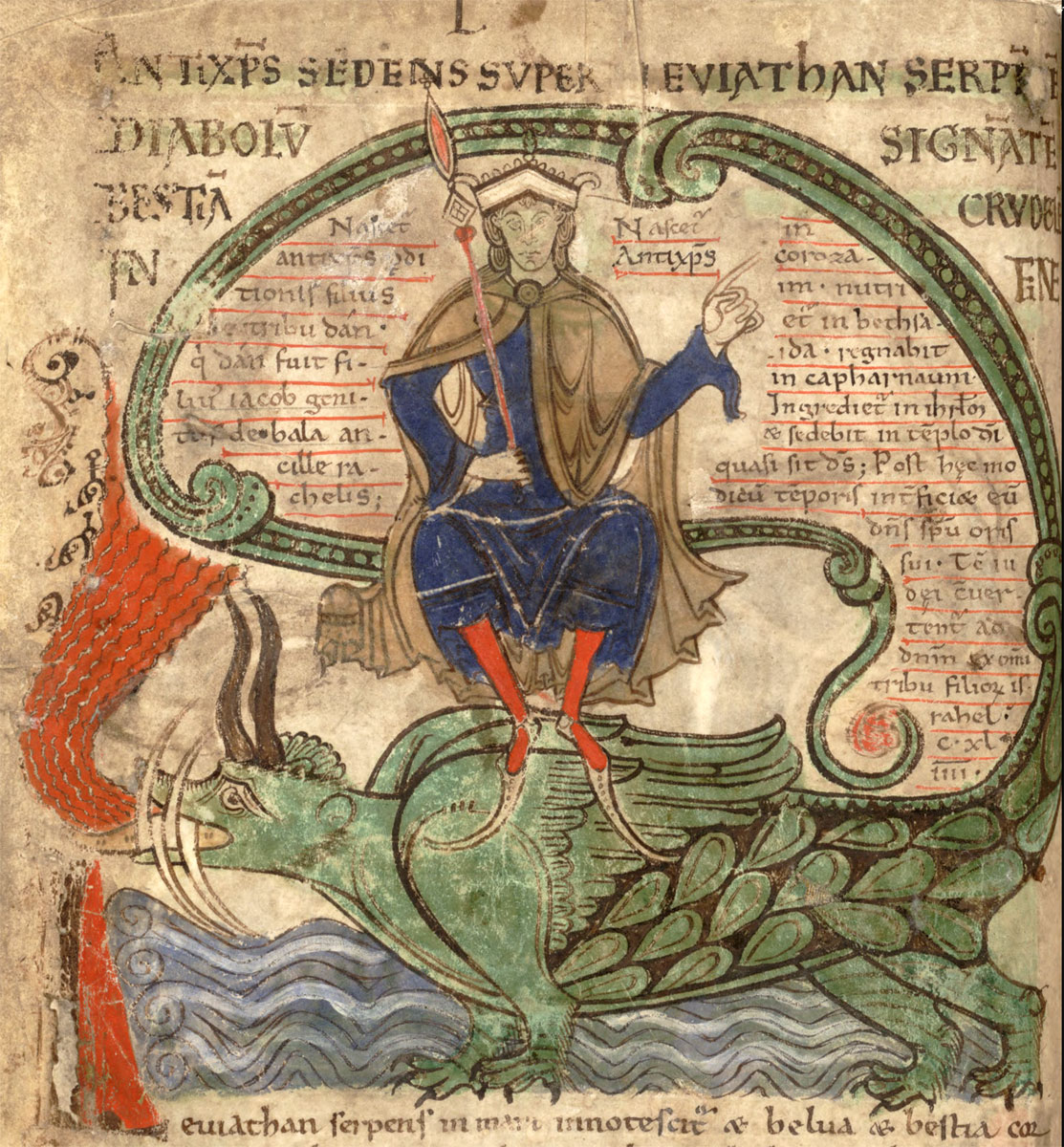 Hellraiser II uses the name for the Lord of the Labyrinth and ruler of the Cenobites, who appears as a floating diamond and is obsessed with order. 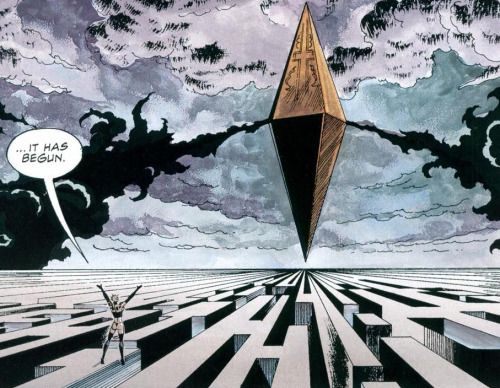 In Disney’s Atlantis, it was an enormous robotic crab, so still a sea monster. 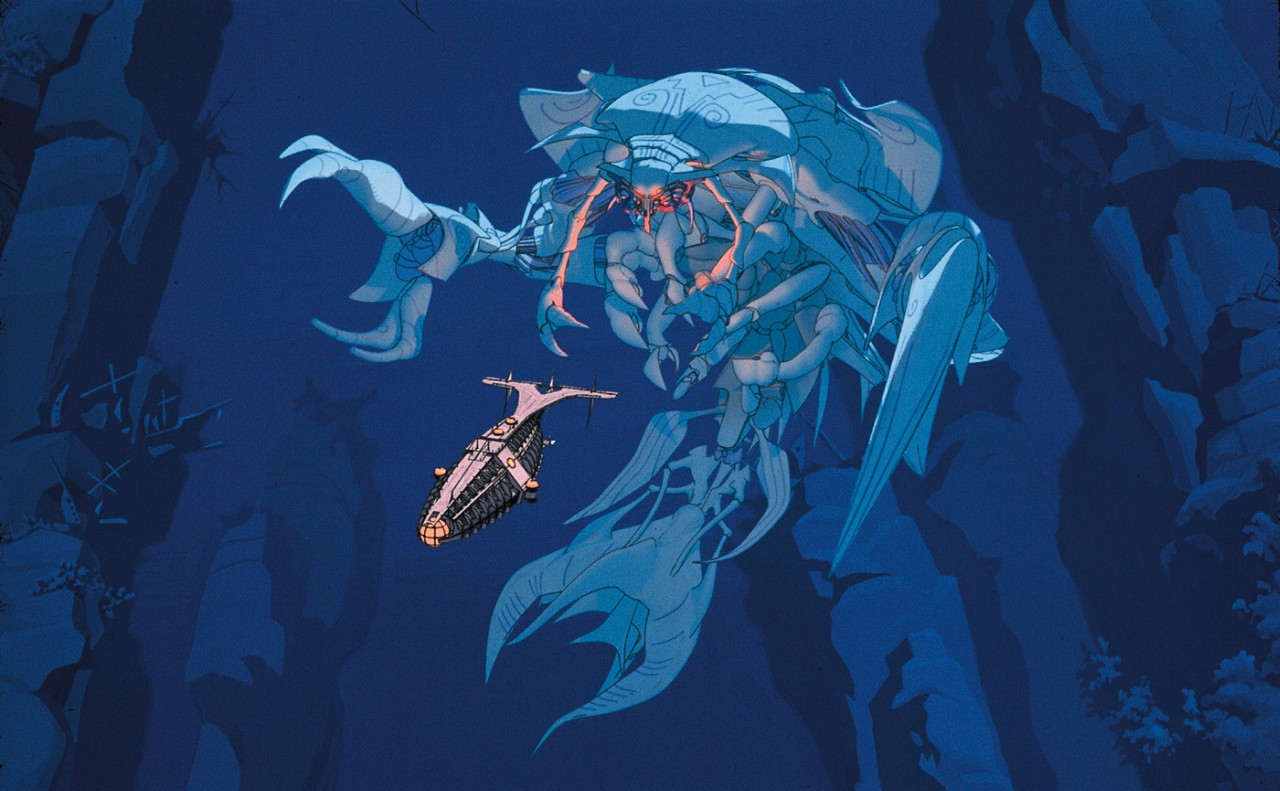 I’d written a little about Leviathan in the FF series in my post on summoned monsters, but I didn’t address how he first appears in the series not as a summon, but as a dungeon. He guards the approach to the Mysidian Tower, where the book that contains the spell of Ultima is kept. 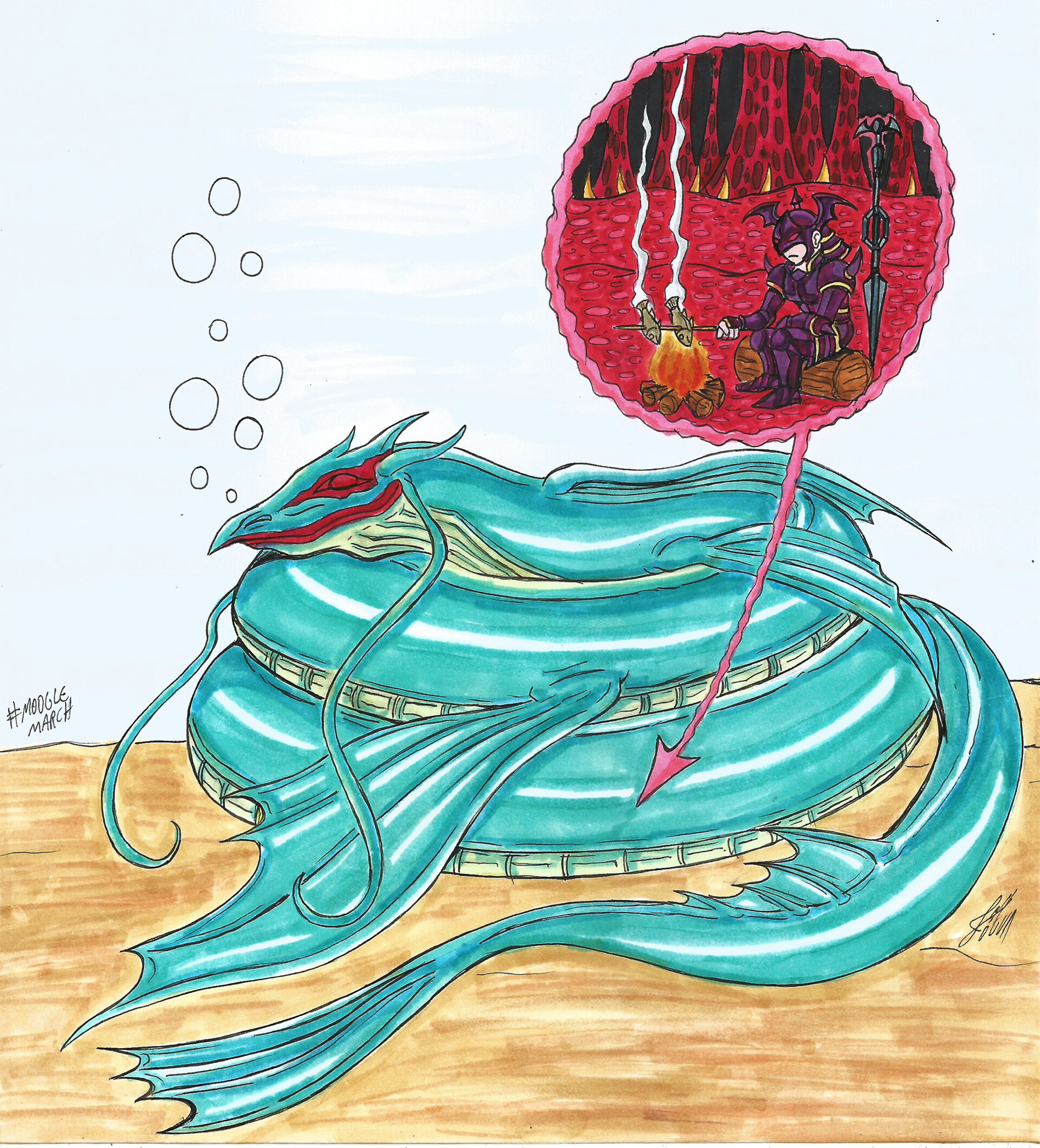 Picture by Jeffrey Haiduk
When he swallows your party, you find that not only are there smaller monsters inside him, but also other people, including the Dragoon Ricard Highwind. 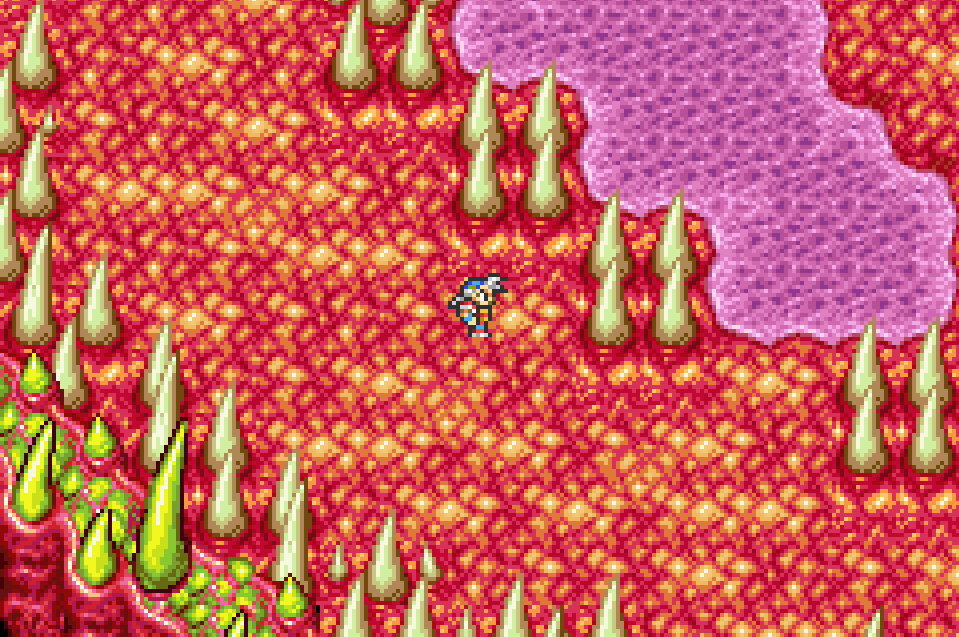 You can escape if you defeat a roundworm in his mouth. 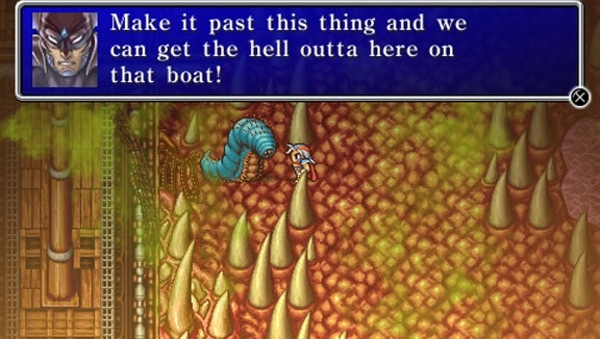 I’d probably feel like destroying things if I had a ringworm in my mouth, too.
He first appears as a summon in FF3, while in 4 he rules the summoned monsters. He attacks the ship on which Cecil’s party is sailing from Fabul to Baron, and takes Rydia to his homeland, where time flows differently. 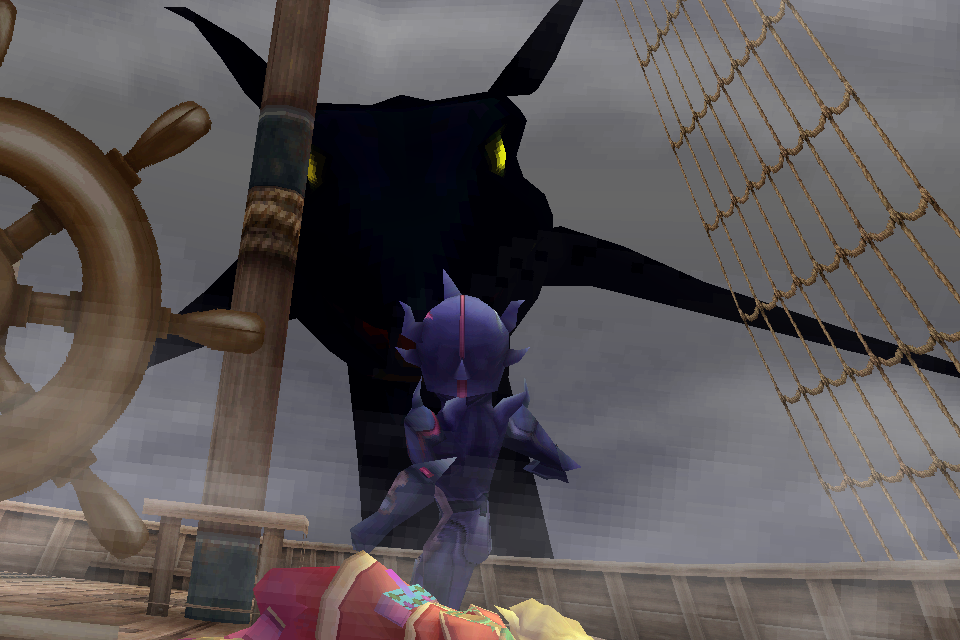 There are a few interesting things to discuss here. One is that, in later translations of the game starting with the DS version, summoned monsters are called Eidolons and their home the Feymarch. Tom Slattery came up with the name on his own, the meaning loosely being “fairy borderland.” The term “Eidolon” was first used in FF9, derived from Greek, basically meaning a ghost or insubstantial object. The thing is, I recently heard on the Let’s Talk About Myths, Baby podcast about a play by Euripides that used the term quite prominently. He essentially tries to rehabilitate the character of Helen of Troy by saying that it wasn’t actually her who went with Paris, but rather a ghostly version of her, while the true Helen stayed in Egypt. I was going to go into more detail about this, but it got too long and too unrelated to Leviathan or games, so I’m saving it for another post. By the way, the FF6 (and 12) name for summoned beasts, Esper, is apparently based on “ESP-er,” i.e., people with psychic abilities. Honestly, I find that a little disappointing; it just sounds so ethereal.

Anyway, the idea of people living inside of Leviathan as per 2 obviously brings Jonah and the whale (not specifically identified as a whale in the original source) to mind, but I’m sure there are other stories of the same sort. There’s a page pointing out parallels between FF4 and Terry Gilliam’s The Adventures of Baron Munchausen: there’s a country called Baron (the full title of the Japanese release), the heroes go to the Moon and inside a volcano, and people survive being eaten by a sea monster. This latter is more accurate to FF2, as I don’t know that Leviathan in 4 actually swallows Rydia (although maybe he does), but I suppose it’s close enough. 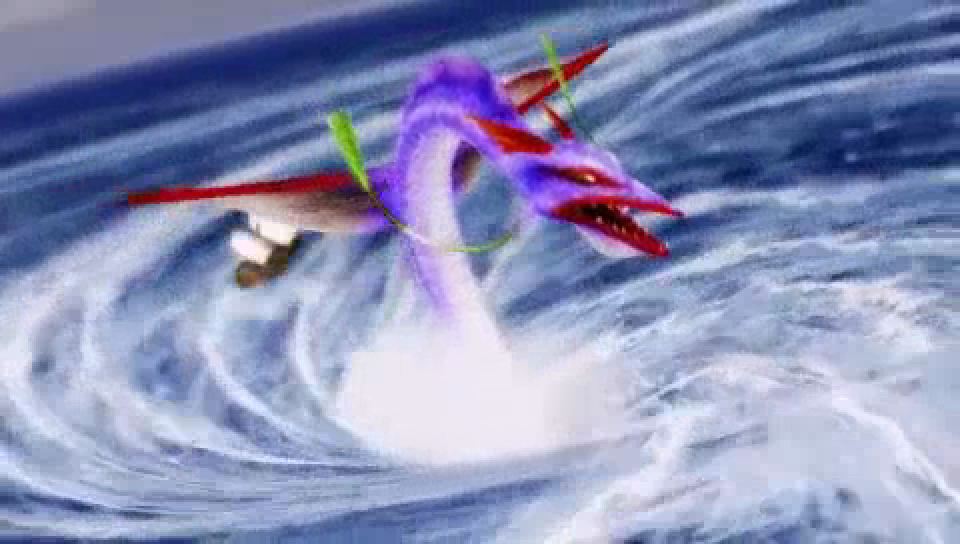 Oddly, I had just looked up that page after hearing about it a while back, then just today I saw the author retweeted on Twitter (okay, I guess you can’t really be retweeted anywhere else). Since the games tend to mix Eastern and Western mythology, I’ve seen it suggested online that the FF depiction of Leviathan is partially based on Ryujin, the dragon god who rules the seas, and who lives in another realm where time moves more slowly. 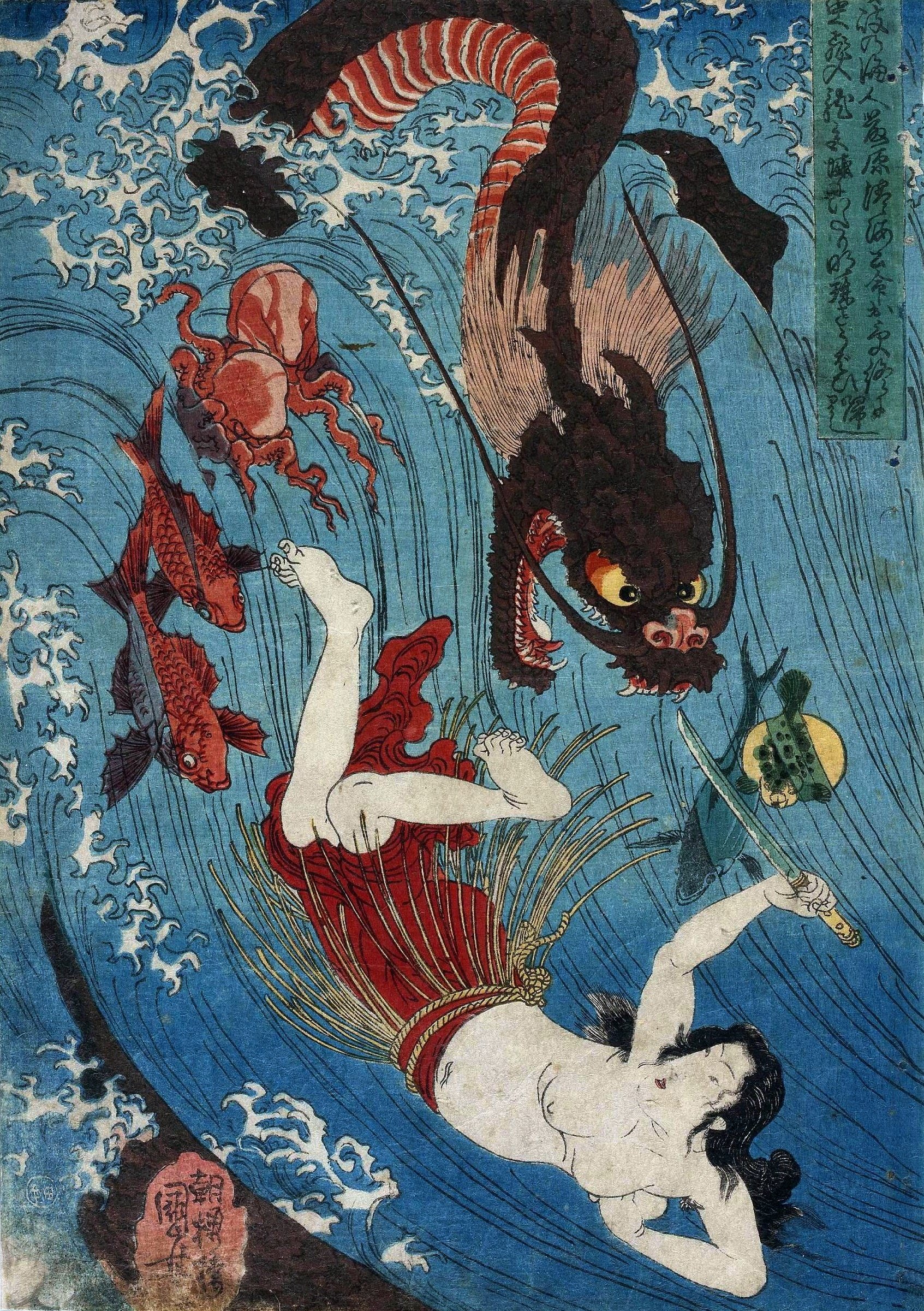 Despite the references in Job, the FF Leviathan attacks with tidal waves, not fire. He also has only one head, although depictions with more don’t seem to be that common anyway.

While the Dragon Quest games have plenty of sea monsters, Leviathan wasn’t really a part of the series until DQ9. That is, except for his appearance in the Emblem of Roto manga. 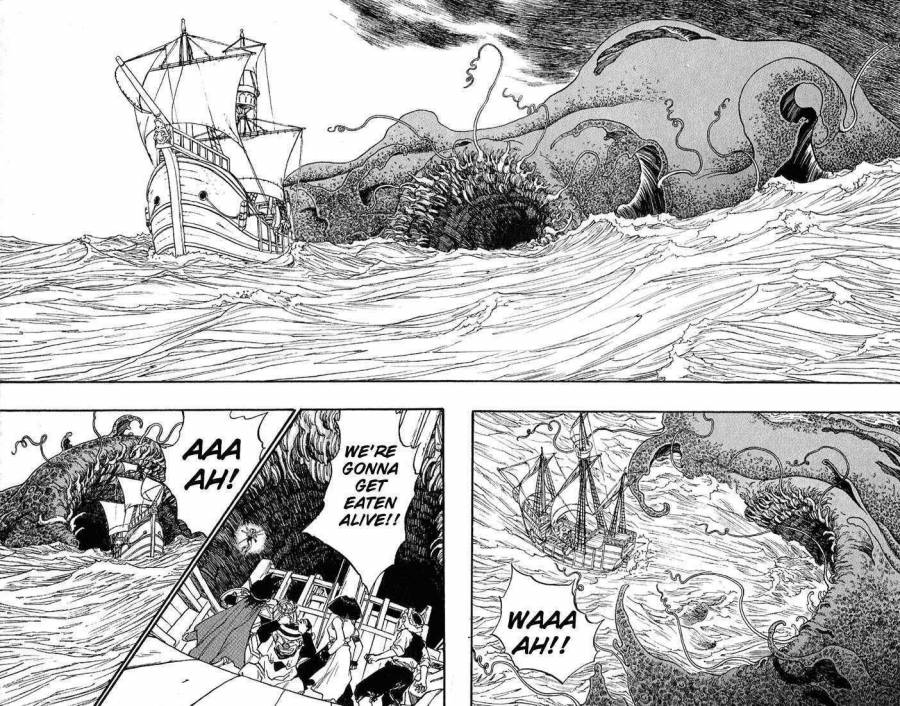 There’s a fan translated version online that ends during the heroes’ conflict with Leviathan, who’s called the Lord of the Sea. The way he’s drawn resembles a wobbegong shark, an animal that uses camouflage to look like part of the sea floor.

His mouth, however, is based on that of a lamprey. In 9, there’s a boss monster in Porth Llaffan called Lleviathan, who also attacks with tidal waves. The extra L is because the residents of the town have Welsh accents, typical of modern DQ translations. He’s actually a fisherman named Dylan Jones who was transformed by a fygg, and would provide fish to the village when requested by his daughter Jona. 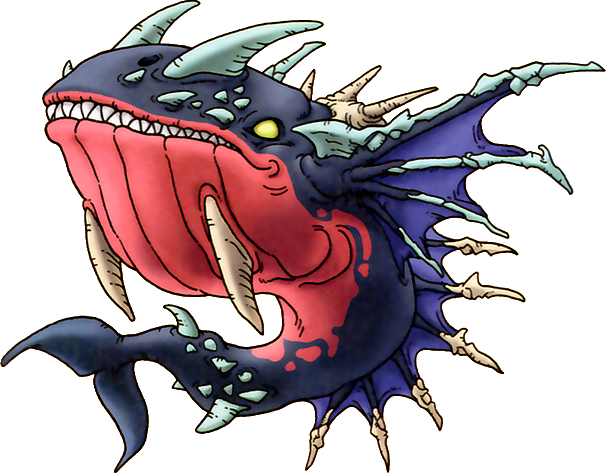 This creature looks more like a whale than a dragon, and the name Jona refers to the Biblical Jonah, while Dylan is a character in the Mabinogion who lives in the sea. Jones is a common Welsh surname, and there might also be a reference to Davy Jones of locker fame, although there’s some speculation that this name was also based on Jonah’s. There’s a real Lleviathan in the game as well, the last of his kind. I’ve read that the prehistoric Pokémon Kyogre, who resembles a whale, might be partially based on Leviathan, with his traditional rival Groudon inspired by the Behemoth. The former can expand the seas, and the latter the land. 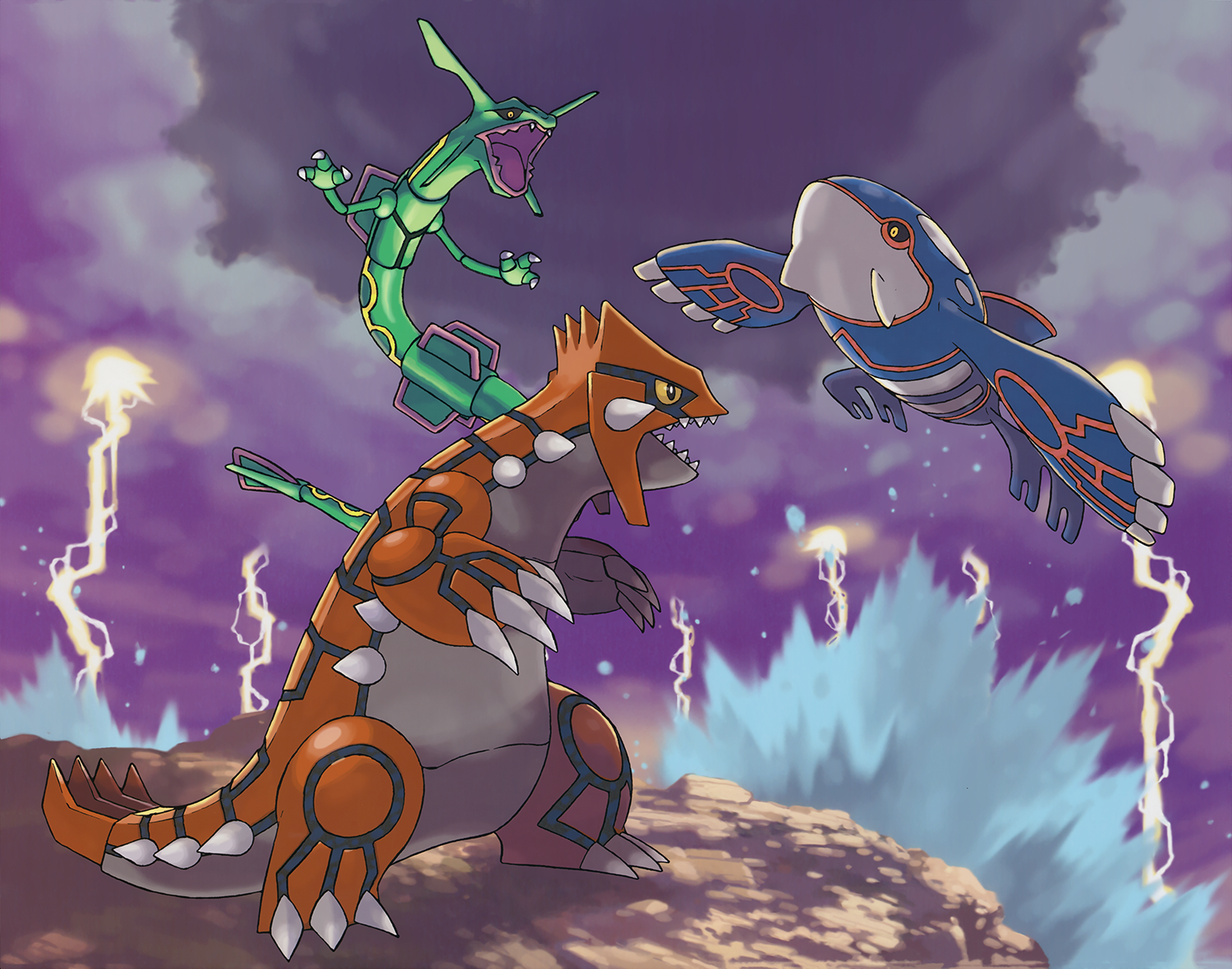 I’m sure there are plenty of other games with Leviathans, but they’re not ones I’m particularly familiar with, so that’s all for now.

2 Responses to Love That Leviathan