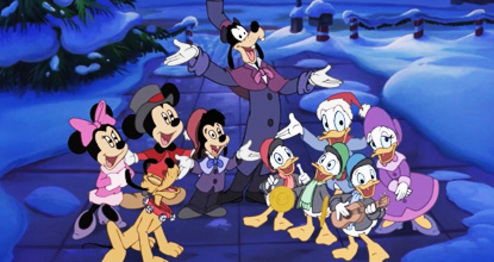 Mickey’s Once Upon a Christmas – I kept seeing this recommended on Disney Plus, so I figured I might as well give it a shot. From 1999, it’s a collection of three different Christmas-themed cartoons, each featuring one of the three main Disney animated characters. Kelsey Grammer does the wrap-around narration in verse. It’s pretty sentimental, but that’s about what you’d expect, right? “Donald Duck: Stuck on Christmas” has Huey, Dewey, and Louie excitedly celebrating Christmas, ignoring pretty much everyone else to play with their new toys. 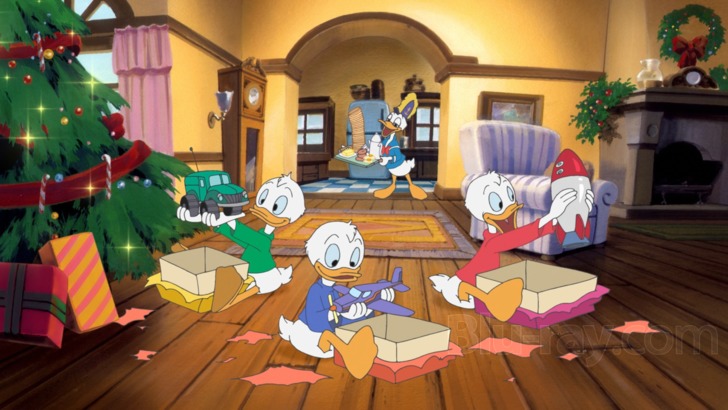 They wish on a shooting star that every day would be Christmas, not a wholly original idea. They love it at first, but soon get frustrated. The way it’s handled here is like Groundhog Day, not just because everything but them gets reset every morning, but because it’s only once they start doing things for others that the cycle ends. Daisy and Scrooge appear in this one, as does a one-time character called Aunt Gertie, a large duck who’s eager to give kisses to the nephews. 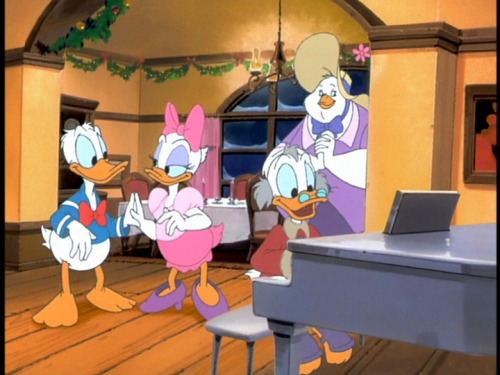 With so many members of Donald’s family already in existence, I’m not sure why they brought in a new one, but whatever. And Chip and Dale seem to live in a tree in Donald’s yard. 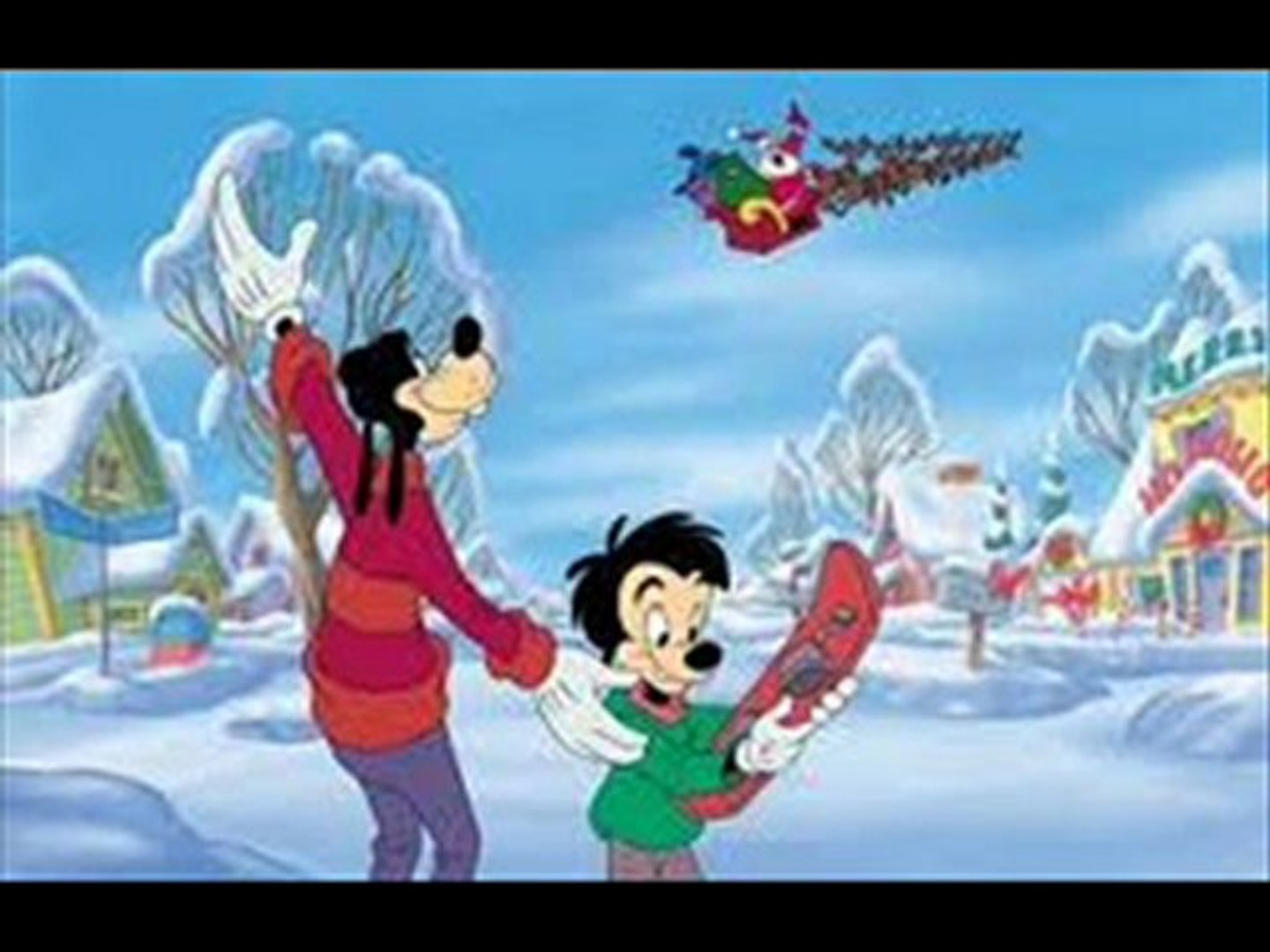 “A Very Goofy Christmas” is about Goofy and Max, his son from Goof Troop, but he’s younger here. After a mad dash across town to get a letter to Santa Claus to the postman, Pete tells Max that Santa doesn’t exist, and Goofy is determined to prove that he does. At one point, Goofy loses hope, and Max starts trying to convince him instead. It’s not entirely clear which direction this is going to take, but eventually Santa finally does show up, and gives Max the snowboard he’d been hoping for. There’s a guest appearance by a Beagle Boy trying to break into Pete’s house through the chimney, whom Goofy initially mistakes for Santa.

Finally, “Mickey and Minnie’s Gift of the Magi” is pretty much exactly what it says on the title, with Mickey trading his harmonica for a watch chain for Minne, and Minnie selling her watch to get him a harmonica case. It takes a little while to get to the inevitable conclusion, though, instead showing how both of them are screwed out of money at their respective holiday jobs. Mickey works at Pete’s Christmas tree lot, and his boss docks his pay and takes away his tips when Mickey foils his attempt to sell a really expensive tree to a family who can’t afford it. Pete gets an instant karmic punishment when his whole lot burns up and he turns into a firework, but that doesn’t help Mickey any. And Minnie’s department store boss, Mortimer Mouse, gives her just a fruitcake as a holiday bonus. Daisy is working in gift wrapping with her, and while this could just be my imagination, she looks different from how she appeared in the first segment. Maybe it’s just the outfit. 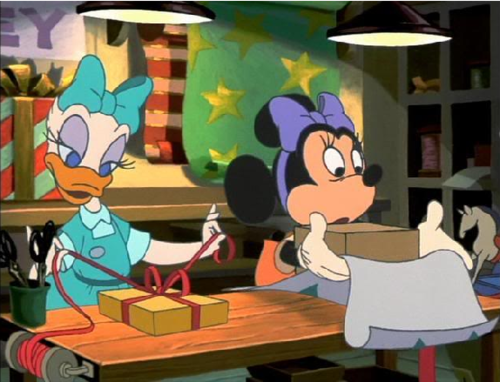 Mickey then plays the harmonica for the fire department’s toy drive because the band (called the Firehouse Five after an actual band made up of Disney animators back in the day) is busy putting out the fire at Pete’s lot. Beth pointed out that Mickey’s harmonica playing made a lot of other people happy, so even if he’s okay with losing it, he maybe should have kept it for the greater good. Oh, well. Pluto and Figaro appear in this one. All of the main characters then join together to sing a song at the end.

Babes in Toyland – This is the television version that was performed live in both 1954 and 1955, with Wally Cox as Grumio, the head toymaker. The story is narrated by a Macy’s Santa to a little girl whose mother accidentally left her at the store, so he reads a book to her while waiting for the mom to arrive. He adds a lot of his own commentary to the basic story, like a list of humorous villainy that Silas Barnaby does. Barnaby is here played by insult comic Jack E. Leonard, who wears glasses and a Panama hat. He owns pretty much everything in town, including the toy factory; and he fires Tommy Tucker because he’s engaged to Mary, the girl he wants but who has no interest in him. It’s interesting how every version of this has a romantic relationship between two nursery rhyme characters, but it’s never quite the same ones. It’s a very padded production, with long bits of clowns performing and of Grumio playing with his puppets. My mom had once mentioned some guy called the Banana Man, who would appear on Captain Kangaroo and do an act that involved pulling bananas and other props from his pockets and making high-pitched exclamations, and he has a long segment here as well. There were apparently actually two Banana Men, the original with the unfortunate name of Adolph Proper (well, it wasn’t yet unfortunate when he was born), who went by the stage name of A. Robins. Sam Levine took over the act after Robins died, so it would have been him in this production. This was apparently originally broadcast in color, but existing recordings are in black and white. It’s slow-paced and didn’t age that well, but it’s an interesting artifact. 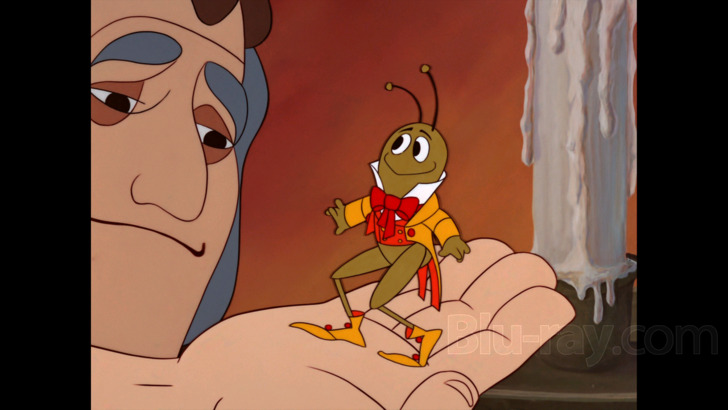 Cricket on the Hearth – One of the lesser known Rankin/Bass Christmas specials (or at least it was to me), it’s loosely based on a Charles Dickens story. He actually wrote five different Christmas tales, and this used to be the one most often performed on stage, but it’s obviously since been supplanted by A Christmas Carol. This is classic animation instead of stop-motion, meaning it has the same rough quality and occasional psychedelic bits typical of these things. I haven’t read the original story, but just looking at a summary makes it obvious they streamlined things a lot, cutting out some of the main characters and combining others. Dickens had a poor toymaker with a blind daughter and a son who was lost at sea, leaving a fiancee behind, while here it’s the daughter’s sweetheart who disappeared. She then goes blind because of psychological issues, which I guess is about what happened to Tommy, but there’s no indication as to her pinball skills. The toymaker, Caleb, is employed by a miserly old man named Tackleton, who doesn’t pay him any money, only rather squalid room and board. But, since his daughter Bertha is blind, he lies to her about their situation to make her feel better. Tackleton decides he wants to marry Bertha, for no reason we can see, but her sweetheart returns and her blindness is cured. Tackleton is then redeemed by kindness and holiday cheer, much like Dickens’ more famous Christmas-themed villain. I understand there’s a whole subplot about Tackleton tricking someone into thinking his wife is cheating on him, Othello-style, that was obviously excised. What we do get a lot of here are talking animals. I think Dickens gave the titular cricket one line, while here he provides commentary throughout. 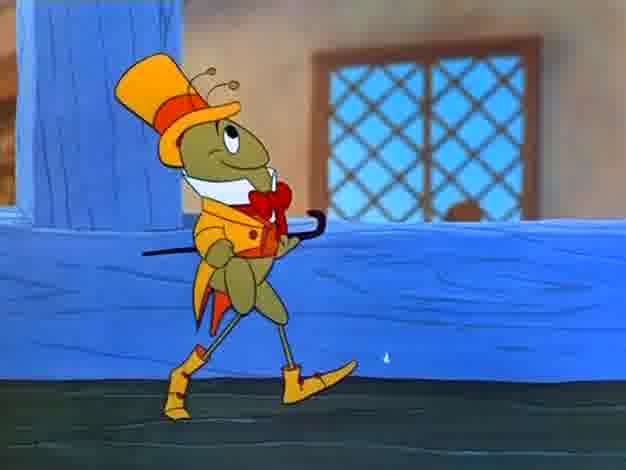 There’s some obvious influence from Disney’s more famous cricket character in his appearance and attitude, although I guess not enough to attract their lawyers. He does have an English accent, so that’s…kind of different. 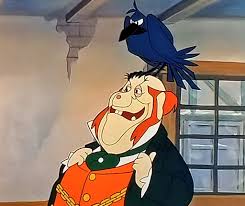 And Tackleton has a pet crow named Uriah (after a character in a different Dickens story), who has connections with a criminal underworld of animals, who hang out in a club with a burlesque dancing cat. 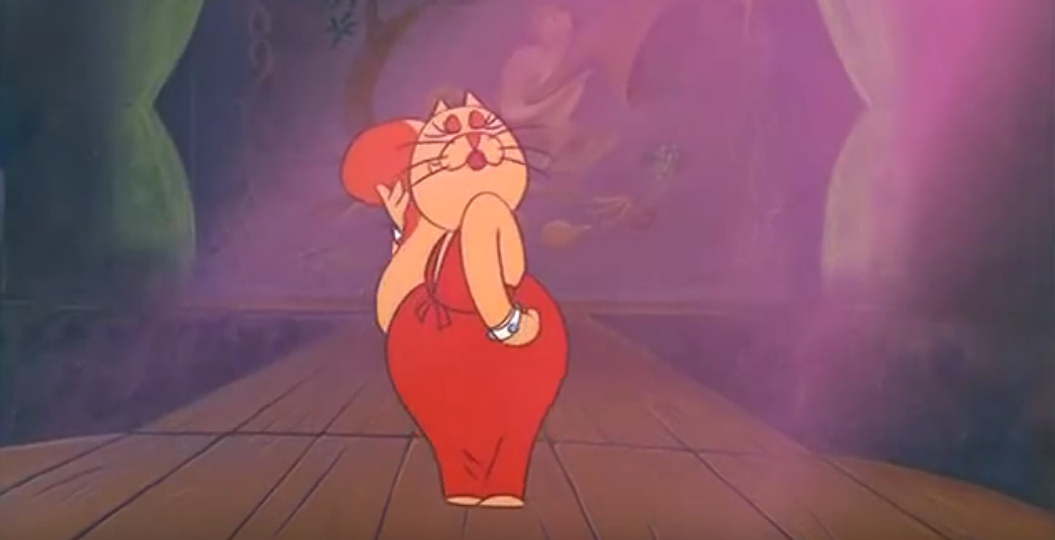 A monkey and a dimwitted dog help Uriah to capture the cricket to sell him to a sea captain bound for China, and the captain then immediately murders them. 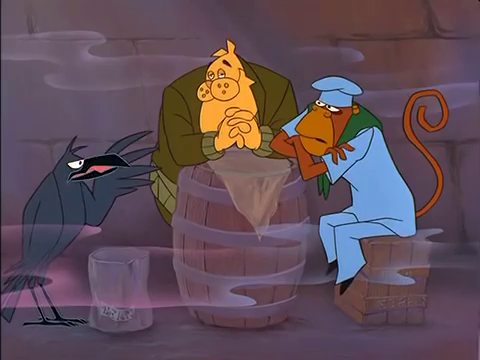 I know they were bad guys, but that’s still really dark. One of them was somebody’s pet! The cricket escapes by playing dead, which causes the captain to throw him overboard, supposedly just as he planned. How he could have planned that, I have no idea, but whatever. While Uriah is introduced early on, the rest of this animal subplot comes out of nowhere, and is dropped just as quickly; but is then followed up by toys coming to life. I think whoever wrote this was all too aware that the main story was pretty boring. This isn’t something I would recommend, but I have some completist tendencies.