According to the McGraws’ Merry Go Round in Oz, the Easter Bunny lives in the Munchkin Country of Oz, and is a loyal subject of Ozma. Edward Wagenknecht is quoted in the most recent Baum Bugle as having said that he thought Merry Go Round was “the only Oz book that includes distinctively Christian references,” but a footnote points out that L. Frank Baum used Santa Claus in The Road to Oz. Of course, both Santa and the Bunny are largely secular figures with a lot of pagan influence anyway. When Dorothy and the Cowardly Lion visit the Easter Bunny’s kingdom, sometimes called Bunnyland (not to be confused with Bunnybury), they find it to be a large cave surrounded by a series of tunnels. The rabbits at work there grow Easter grass, make baskets, carve chocolate, and of course dye eggs. The Easter Bunny’s woven throne is in the center of the main cave. This legendary lagomorph wears a waistcoat, a monocle, and a golden crown; and is said to be “nearly as tall as Dorothy, not counting his long, alertly twitching ears.” This makes him much larger than the citizens of Bunnybury, who shrink down visitors to their town; but not as big as the six-foot-tall Wag. The Easter Bunny mentions his grandfather’s reign, so he’s apparently not immortal like Santa. The specific reference is to the Chief Artist of Bunnyland making the Great Egg in the current Easter Bunny’s grandfather’s time. The band for the egg turns out to be one of the missing Circlets of Halidom, lost down a rabbit hole in the time of King Herald LXII. As Herald LXIV is ruling at the beginning of the book, the lifespans of the Kings of Halidom and Bunnyland were apparently similar. 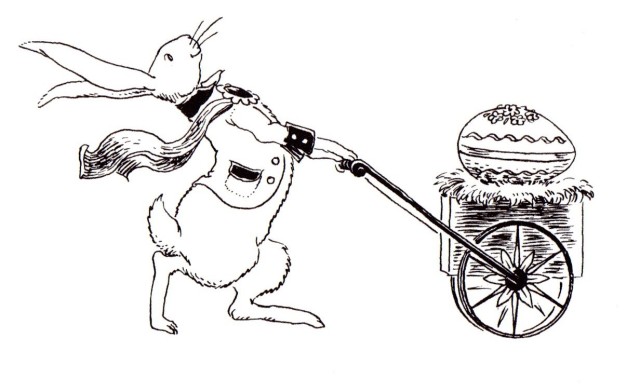 This post is partially an attempt to promote my own story, “The Easter Bunny of Oz.” I figured it wasn’t entirely fair that Santa appeared in so many more Oz tales than the rabbit, so this was my partial attempt to rectify that. It includes an origin story for the Easter egg hunt, which an Internet search indicates was first known to be practiced around the seventeenth century, although dyeing eggs for Easter dates back to some time before that. I thought about addressing the beginnings of the office of Easter Bunny itself, but decided that was probably better left vague.

I don’t believe Baum ever wrote about the Easter Bunny, but he did pen two short stories related to Easter. One of them, “The Ryl of the Lilies,” has a boy named Bob helping out a Ryl who tends Easter lilies. In the other, “The Strange Adventures of an Easter Egg,” a hen manages to place a gold piece INSIDE an egg, which eventually makes its way to a poor girl named Nan. J.L. Bell proposes that the Easter Bunny tradition wasn’t as popular in Baum’s time (although it certainly did exist), and that both of these stories involve churches. While Baum tended to keep religion out of the Oz books, there are both positive and negative portrayals of churches and ministers in some of his other fantasy stories.

2 Responses to Some Bunny Special