A Pyrate’s Life for Me

Sky Pyrates Over Oz, by Sherwood Smith – Back in 2005, Random House became the first major publisher in some time to put out a traditional Oz book, Smith’s The Emerald Wand of Oz. It featured the adventures of two sisters who were distant relatives of Dorothy’s, flighty Dori and practical Em. This was followed the next year by Trouble Under Oz, but apparently the books didn’t sell that well, and the publisher scrapped the plans for the intended four-book series. I believe the original third book was going to take Em on a solo adventure on the Nonestic Ocean, but I don’t think it was ever written. Smith had, however, completed the concluding volume, in which both sisters take to the skies above Oz. It was finally published last year, albeit by Marcus Mebes’ label instead of Random House. Dori and Em have adventures with Scraps, Glinda, and the titular pyrates, who use a non-traditional spelling of the word because they’re really peacekeepers rather than thieves. They’re also accompanied by their father, although due to a magic spell he’s in the form of a dog throughout the story. A few of the Snubnosed Princesses from Sky Island make appearances, and the missing Dorothy is finally rescued. Dorothy’s disappearance is a story arc in Smith’s books, and apparently she was missing from summer of one year until spring of the next. The main villain is the Nightmare Sorcerer from the Kingdom of Dreams, an area on the map of Oz that hasn’t been explored all that much. While I’m a little disappointed that Smith only ended up writing three Oz books instead of four, I found this to tie up the loose ends in a satisfying way. The illustrations are by Kim McFarland, author of A Refugee in Oz, and they’re quite good but a bit sparse. I guess this fits with William Stout’s illustrations for Smith’s other two Oz books, since there weren’t very many of them either. 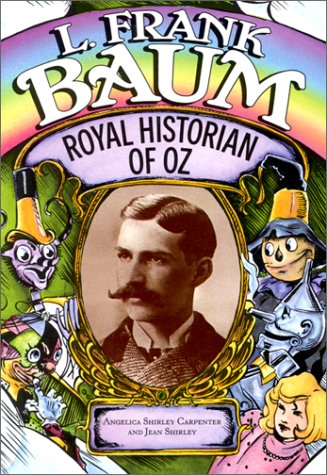 L. Frank Baum: Royal Historian of Oz, by Angelica Shirley Carpenter and Jean Shirley – Although there are now several biographies of Baum in existence, for a long time there really weren’t any other than To Please a Child, which contained a lot of apocryphal information in an attempt to mythologize Baum. (For that record, I haven’t read it.) This children’s biography, published in 1992, is better in terms of scholarship. When it retells one of the less likely anecdotes, it makes clear that it might not be entirely true. While quite short and purposely avoiding some of the more controversial aspects, it’s a good overview of Baum’s life and works. It also contains some photographs I hadn’t seen before. I think it’s worth the two dollars I paid for it. Michael Patrick Hearn has apparently been working on a definitive Baum biography for years, but I don’t know how that’s going.