When I hear about a new book coming out by an author I like, I try to put a hold on it at the library. Recently, it seems like all my holds came in at once, and since they have other holds and I can’t renew them, it means I have to concentrate on one at a time instead of my usual leisurely (but organized in a way that makes sense to me) switching back and forth.

The Ship of the Dead, by Rick Riordan – This is the third and last book in the Magnus Chase series. I didn’t know this one was going to be the conclusion, and it kind of felt like the ending was pretty abrupt after the episodic build-up. It’s probably not going to be the last time we see Magnus and his world, though. Riordan is making no bones about how his mythology series all take place in the same universe with Percy Jackson showing up to train Magnus in the first chapter. He has problems of his own, which makes me think how crazy it is that the Greek, Egyptian, and Norse pantheons not only co-exist, but are all dealing with world-threatening events at around the same time. It sounds like these things happen all the time for those connected with the old gods, though. Mythological figures also don’t change all that much in personality, even when they adopt new technology and culture. Odin, for instance, has become obsessed with PowerPoint presentations. Magnus and his friends have to stop the ship made of dead men’s nails from sailing, and hence prevent Ragnarok. This leads them to the home of <a href=https://vovatia.wordpress.com/2011/08/20/out-to-sea/the sea god Aegir and his daughters, the castle of Skadi, and back to Alfheim to battle Hearthstone’s father who had been turned into a dragon by the power of Andvari’s ring. Finally, they reach the ship for a confrontation with Loki in a contest of insults that doesn’t exactly turn out as planned.

The Book of Dust, Volume 1: La Belle Sauvage, by Philip Pullman – The author returns to the world of His Dark Materials with this prequel, introducing an innkeeper’s son named Malcolm Polstead (an older version of him had previously turned up as a student in Lyra’s Oxford, but I haven’t read that yet) who has to take the baby Lyra from the convent where she was left to seek sanctuary at Oxford, which is complicated not only by enemies who want to take the baby, but also by a massive flood. I kind of feel this isn’t enough plot to fill an entire novel, especially when we know basically what’s going to happen. Still, it was pretty cool seeing this world of visible animal-shaped daemons and religious intrigue again, even if I have forgotten a lot of details from the original series. Lord Asriel and Mrs. Coulter both make appearances, as do several other characters from the earlier books, all in true prequel style. A new villain this time is a reprehensible scientist who’s a pedophile and abuses his own daemon. I understand the next book in this trilogy will take place after His Dark Materials.

Donald Duck: Terror of the Beagle Boys, by Carl Barks – This was a birthday gift from my brother. It’s the tenth volume in the series of Fantagraphics collections, although it’s not like they’re being released in order. The comics here see not only the introduction of the Beagle Boys, but also the organization of Junior Woodchucks to which Huey, Dewey, and Louie belong. In the first appearance of the criminal gang, they’re actually successful, but not due to their own efforts so much as Scrooge and Donald’s attempts to prevent them backfiring. The Beagles only appear in the final panel, aren’t wearing their prison jumpsuits, and don’t have any lines. Another story here, “In Old California,” apparently a favorite of Barks’s, has Donald and his nephews seemingly travel back in time to California in the mid-1800s. “Dangerous Disguise,” a spy story with a lot of twists that takes place on the French Riviera and in Spain, is interesting in that all but five characters (Donald, his nephews, and a bullfighter who looks like Donald) are drawn as human instead of animal-people. I understand Barks preferred drawing regular people as background characters, but the editor didn’t approve. Human and funny animal characters often appeared side-by-side in animation, but I guess the comics were stricter about maintaining the sense of this being sort of an alternate world. The short “Attic Antics,” which was drawn by probably not written by Barks, is of interest in that it features Pete trying to rob Grandma Duck while Daisy is visiting, and being foiled by the mice from Cinderella. Again, such crossovers weren’t uncommon in animated shorts, but I get the impression they were much less of a thing in Disney’s comics. Barks shows off his penchant for humorous drawing with a sea serpent Donald encounters during his tenure as a snake charmer.

I do think it’s a little odd that this story ends with Donald happily collecting trash while his nephews complain he refuses to make anything of himself while the very next story in the collection has Donald complaining about doing any kind of work at all while the nephews don’t mind farm labor, but in a way that makes the characters more realistic, as people aren’t always consistent. The latter comic was also the origin of this: 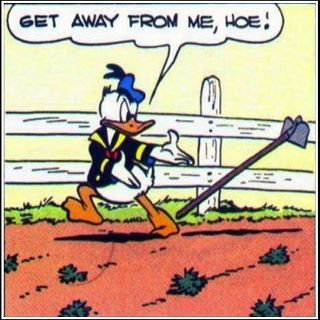