Once & Future, by Amy Rose Capetta and Cori McCarthy – Written by a queer couple and published under the imprint of mystery and thriller author James Patterson, this combines the King Arthur myth with science fiction, LGBT themes, and corporate espionage. Merlin is presented as having gone through the King Arthur cycle forty-one times throughout history, always ending in failure. Arthur is reincarnated repeatedly with the goal of overcoming the greatest evil of the time. Many other characters and aspects of the legend also show up, with some differences depending on the time and place. Merlin is also constantly growing younger, as per T.H. White’s The Once and Future King, so is now a young man who cannot grow a full beard. He awakes in the future, when humanity has abandoned Earth and settled on many other planets. The forty-second reincarnation is a girl named Ari from the planet Ketch, who is of Arab ancestry. She’s a fugitive from the tyrannical Mercer Corporation, which holds a monopoly throughout the known universe. She marries Gweneviere, the queen of a medieval-themed planet, with whom she has an argumentative and passionate relationship. I seem to recall White introducing a bit of a gay theme in that Lancelot developed feelings for Guinevere because he was initially in love with Arthur; and that’s sort of reflected here as well, albeit in a different way. This version of Merlin is gay and has a crush on the story’s version of Perceival. His dalliance with Nimue does come into play, but it’s described as being solely for power, rather than a romantic thing. Ari and her crew partially succeed, but are unable to totally take Mercer down, and there’s an indication that the sequel will involve time travel and the Holy Grail. I enjoyed the book, although it kind of felt small for a story that spans worlds and involves fighting a massive organization. 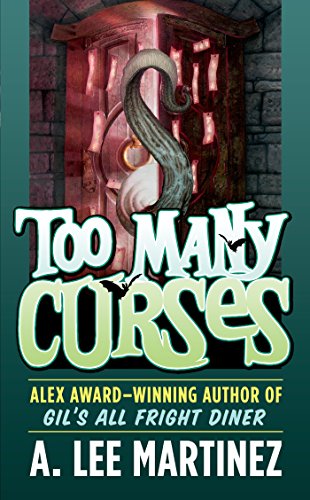 Too Many Curses, by A. Lee Martinez – This was one of Martinez’ books I couldn’t find at the library, and it’s not one of his better ones, but it’s still pretty fun and humorous. It takes place in the castle of an evil wizard named Margle who curses pretty much anyone who bothers him, resulting in his castle being filled with transformed and otherwise magicked people, including a hero turned into a fruit bat, an alliterative owl, a banshee who warns of minor calamities, a disembodied skull, and Margle’s brother who’s become facial features in a jar. When he dies, his kobold housekeeper Nessy takes charge of the castle, trying to sort things out. There are parts where nothing much happens, but Nessy is a likable character, and the supporting cast amusingly eccentric.