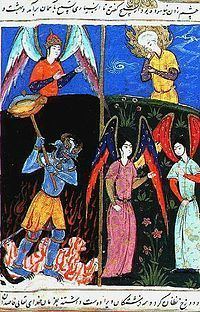 It’s a common theme in many mythologies to have a figure who is regarded as the inventor of writing, and often also a keeper of esoteric knowledge. Greek mythology had Hermes, the Egyptians had Thoth, Babylon had Nabu, and Judaism has Enoch. The composite figure of Hermes Trismegistus was a common one in occult circles, and he was also associated with Enoch. Looking into this a bit, I also found that Islam has a similar figure in Idris, considered the third prophet of the religion after Adam and Seth. From what I’ve seen, all it really says about him in the Quran is that he was a truthful and patient man who was raised to a high station, but a lot of stories about him provide more details. He was born in Babylon, and led a group of followers to Egypt, where he possibly built the first pyramids. By some sources, he was considered to be the first person to use the pen (presumably for writing) and establish a system of weights and measures, as well as the originator of mathematics, astronomy, and use of tools and clothing. His name is thought to mean “interpreter” or “to study.” He’s been physically described as having a broad chest, little body hair, and mismatched ears. Idris is often accepted as an alternate name for Enoch, which would fit with the idea he was taken by God to Heaven. Some stories have Idris hanging out with the Angel of Death, and his life eventually being taken in Heaven, although others say he returned to Earth and died there, and others that he never died. Regardless, he’s said to have visited both Heaven and Hell, and Muhammad saw him in the former when he made his own ascent. Muhammad might also be a descendant of Idris’, although that doesn’t seem to be entirely consistent. In the Genesis account, everyone alive would be a descendant of Enoch, as Noah was his great-grandson, but I don’t how literally that’s taken in Islam. There’s also a tale in which he gouges out one of Satan’s eyes. Another character with whom Idris is sometimes associated is the similarly named Andreas, Alexander the Great’s cook in the Alexander Romances. There’s a story that, while wandering in the Land of Darkness in the Caucasus, the cook accidentally finds the water of life, which revives the fish he was trying to prepare. Andreas drinks the water and becomes immortal, but since he’s unable to find it again to show Alexander, the conqueror ties a millstone around his neck and throws him in the sea, where I guess he’s still living. I’m not actually sure what he would have to do with a wise prophet, but I’ve seen the connection mentioned in a few places, so there’s probably more to it than that. There is a theme of trying to achieve immortality in both stories. I feel I should also mention that Idris Elba played the Norse god Heimdall in the Marvel movies, but he isn’t known for knowledge as much as for having heightened senses. There is, however, a poem called the Rigspala where Heimdall teaches runes to an aristocratic boy. I doubt that’s why a guy named Idris was cast in that role, though.