Jaguar, Jaguar, You Are Shining from Afar 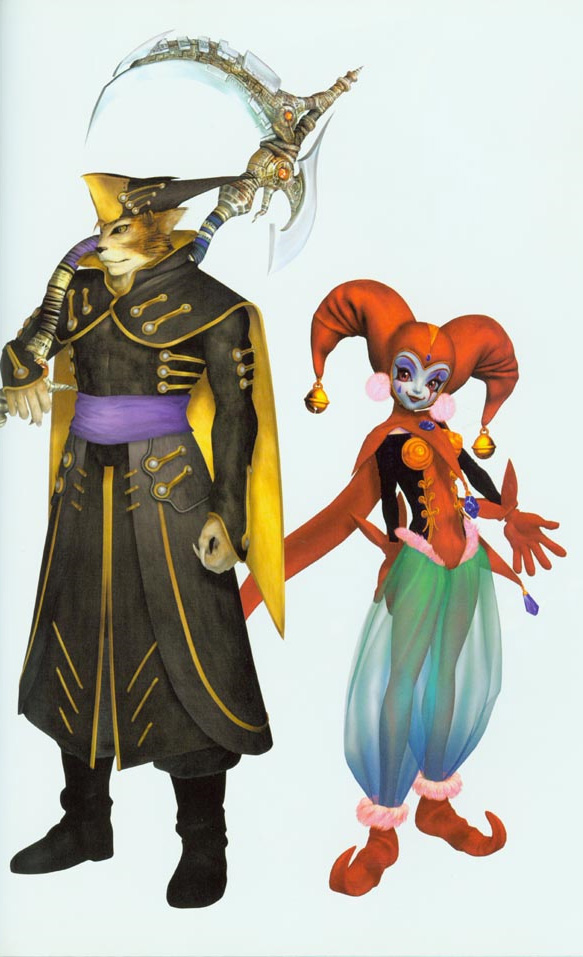 I’m always interested in mythological references in video games I’ve played (and sometimes even ones I haven’t), and the two Chrono games definitely have a fair number of them. There are some SPOILERS for both Chrono games. I’ve seen fans emphasize the Biblical references in Trigger perhaps a bit too much, since a lot of this hinges on the Gurus of Zeal having the same names as the Three Wise Men who visited Jesus, which is only true in the English translation. For that matter, while the characters are Biblical, the names are much later Christian tradition. But that doesn’t mean there aren’t a lot of references of that sort anyway. Cross particularly associates them with the mysterious sea full of stuff pulled from the future: Sea of Eden, Dead Sea, Land of Genesis, Pearly Gates, Tower of Geddon. 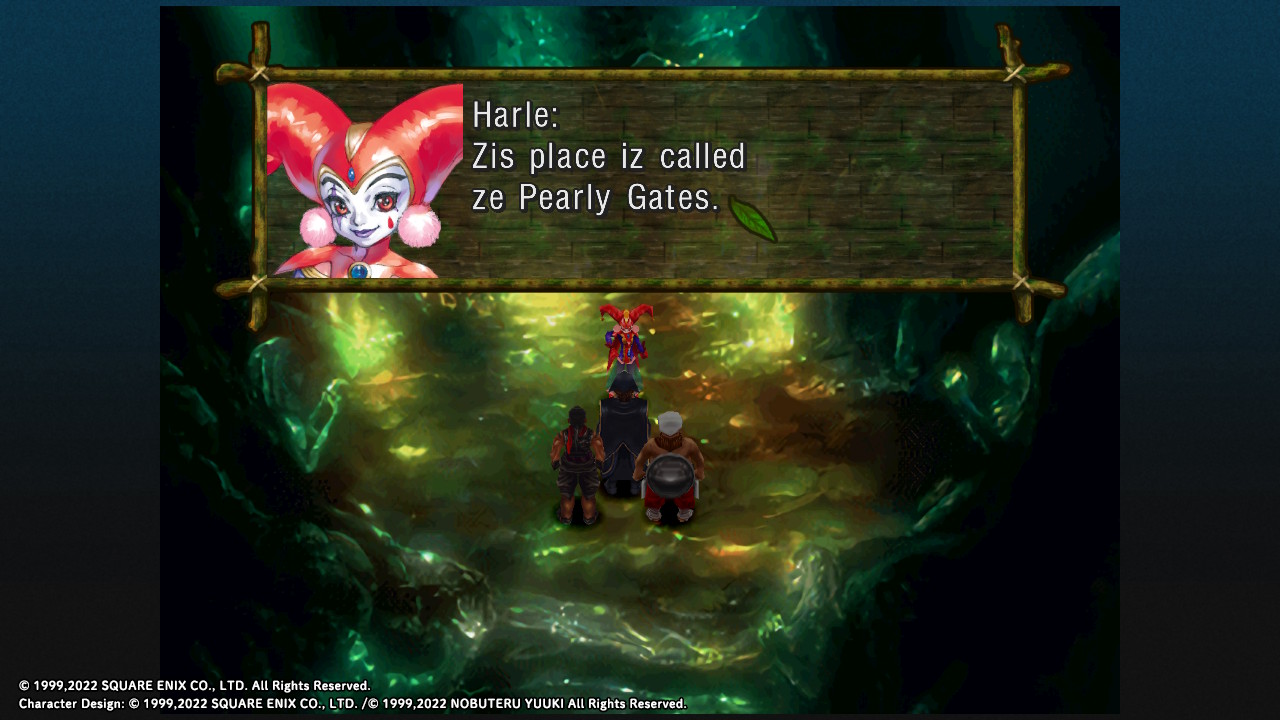 There’s some Greek mythology in there as well, with the guardians of Chronopolis, and hence of the supercomputer FATE, being named after the Fates: Lachesis, Clotho, and Atropos. 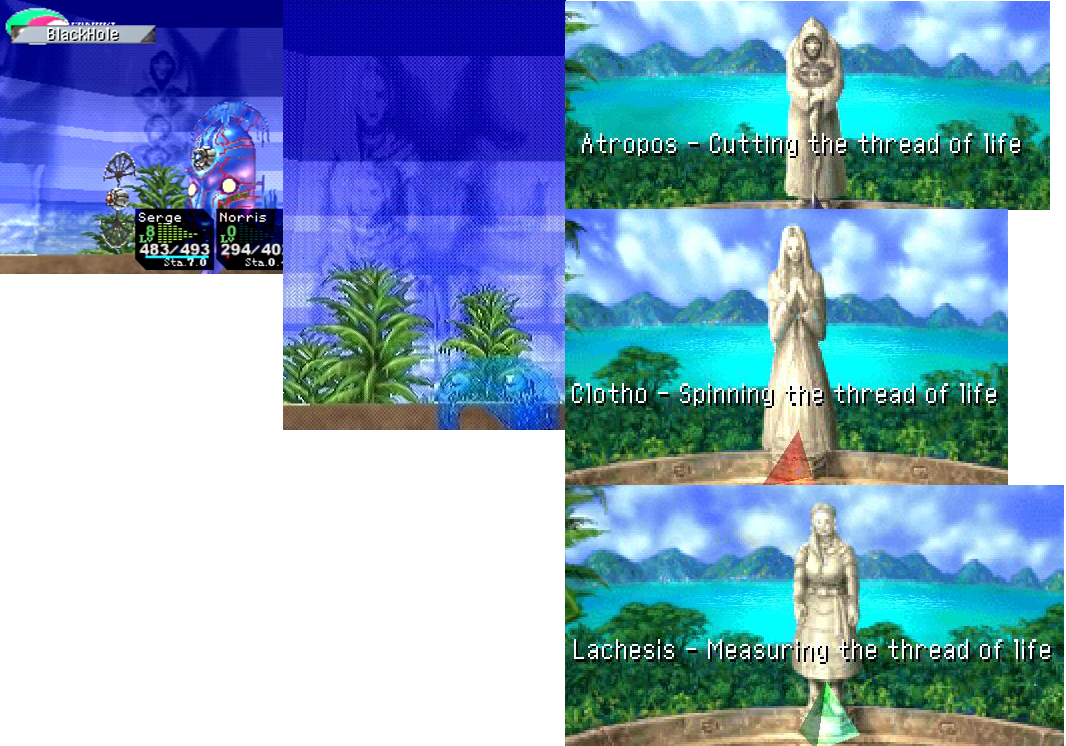 The latter is also the name of a character in Trigger, a pink robot who’s Robo’s girlfriend. 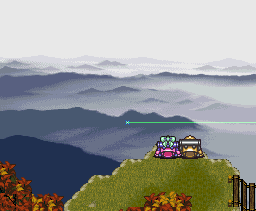 His real name is Prometheus, and since the mythical Titan is often credited with creating humanity and Atropos with deciding when people die, there’s sort of a beginning and ending thing going on there. And Robo was originally made to help humans while Atropos wants to destroy them when you (the player) first meet her, so there’s that. 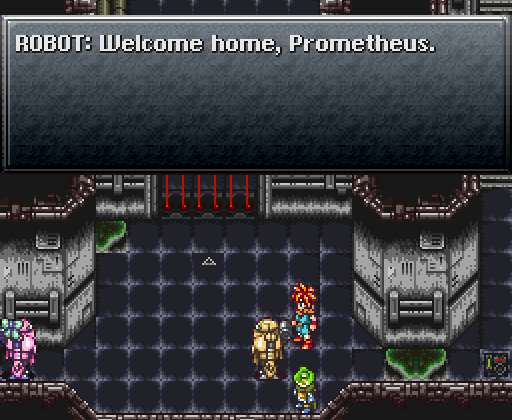 A location called Gaea’s Navel also links with Greek mythology, “navel” being the literal meaning of omphalos, a stone located at what’s supposed to be the center of the world. Several locations had this designation, but the most prominent one was Delphi. In Cross, it’s a lost world still inhabited by prehistoric beings. 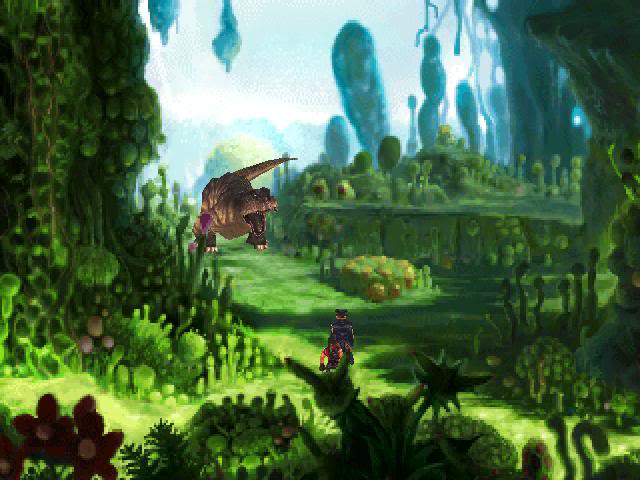 The music played in that location is called “Navel of the Earth,” and has a typical jungle sound.

There’s also a Gaia’s Navel in Secret of Mana, and that one is a cave leading to the Dwarven Village. 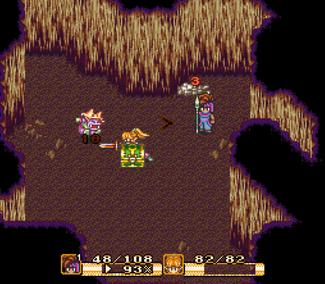 Both that game and Chrono Trigger grew out of the same original project, so it’s not surprising that there would be some connections. There’s a dungeon with that name in Dragon Quest III as well, and for some reason it’s in that world‘s version of Australia. 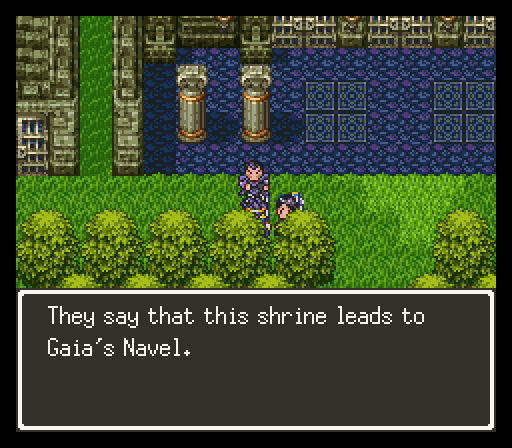 Getting into other mythology, Harle’s Japanese name is Tsukuyomi, after the Japanese god of the Moon. 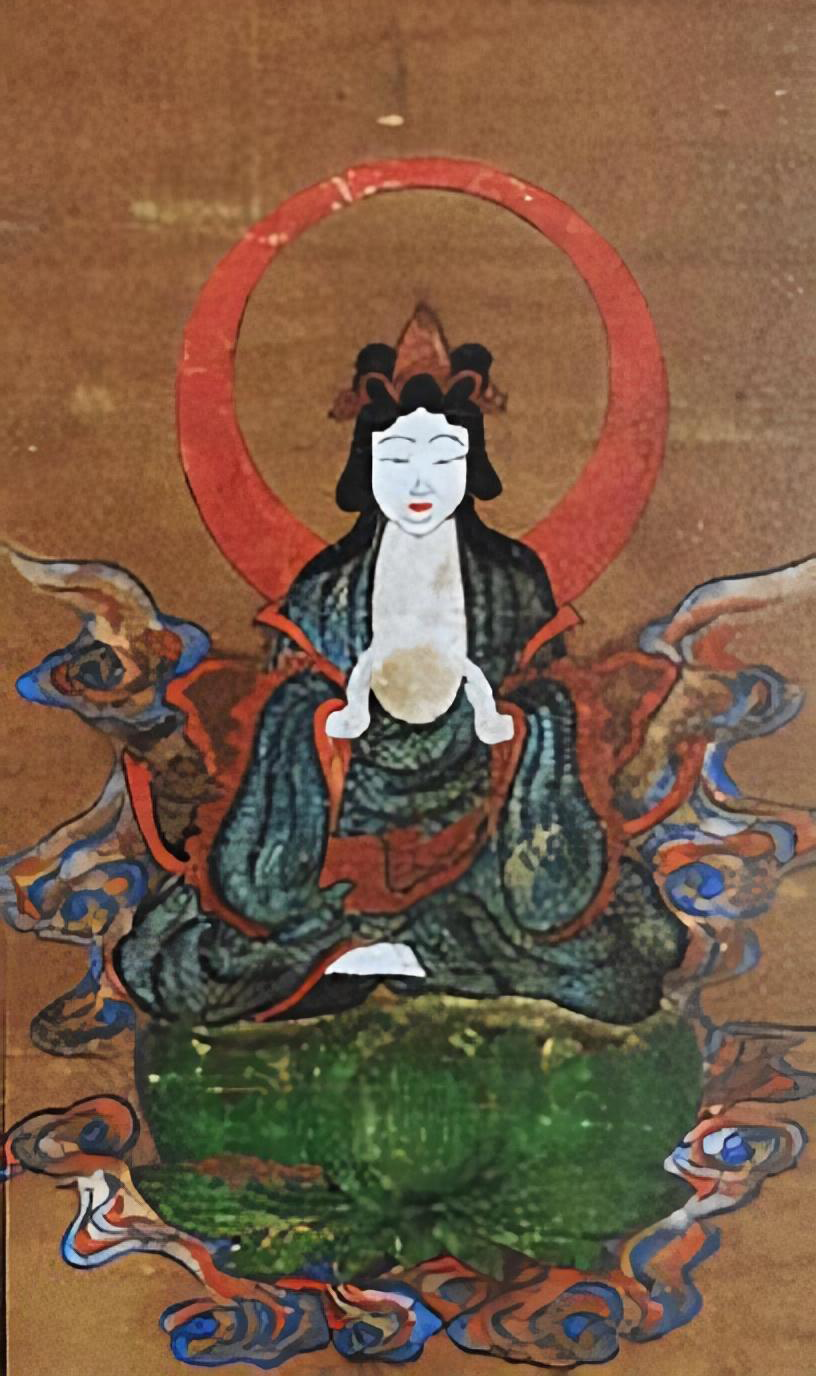 Tsukuyomi’s gender is often ambiguous, but there’s at least one significant reference to the deity as male. After his mother Izanami died and his father Izanagi was unable to save her from the underworld, Izanagi purified himself, which resulted in the birth of Tsukuyomi, the sun goddess Amaterasu, and Susano. 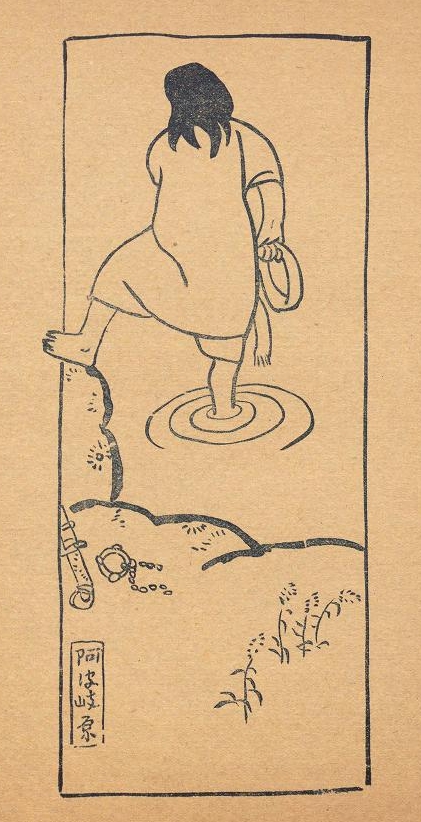 Amaterasu and Tsukuyomi were married, but they had a falling out after the moon god killed Ukemochi, the god of food. Tsukuyomi attended a banquet at the god’s house in the goddess’ place, and when he found out that Ukemochi served the dinner by turning into various environments and spitting out relevant food (a fish from the ocean, game from a forest, and rice from a field), he was so grossed out that he murdered his host. Amaterasu never forgave her husband for this, and that’s why she stays so far away from him, and is in the sky at different times. Harle in Cross is the Dark Moon Dragon, created by the Dragon God to coincide with the second moon drawn into the world from an alternate one along with Dinopolis. 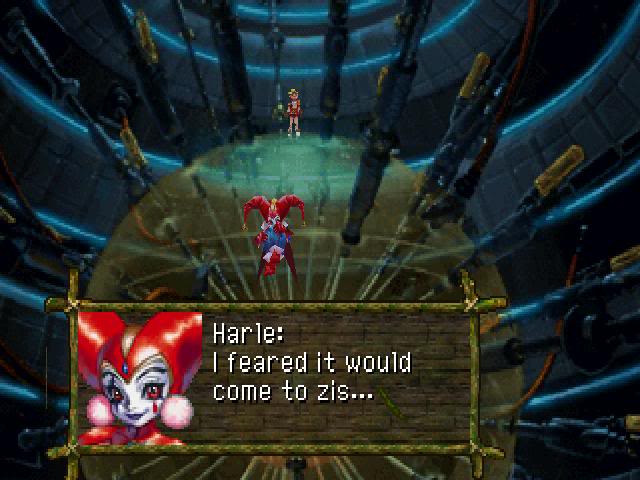 She was created during the storm created by Schala in Serge’s youth, which temporarily loosened FATE’s hold on the dragons. Her unique battle techniques are all moon-related, and she and Kid both make threats involving the two moons. 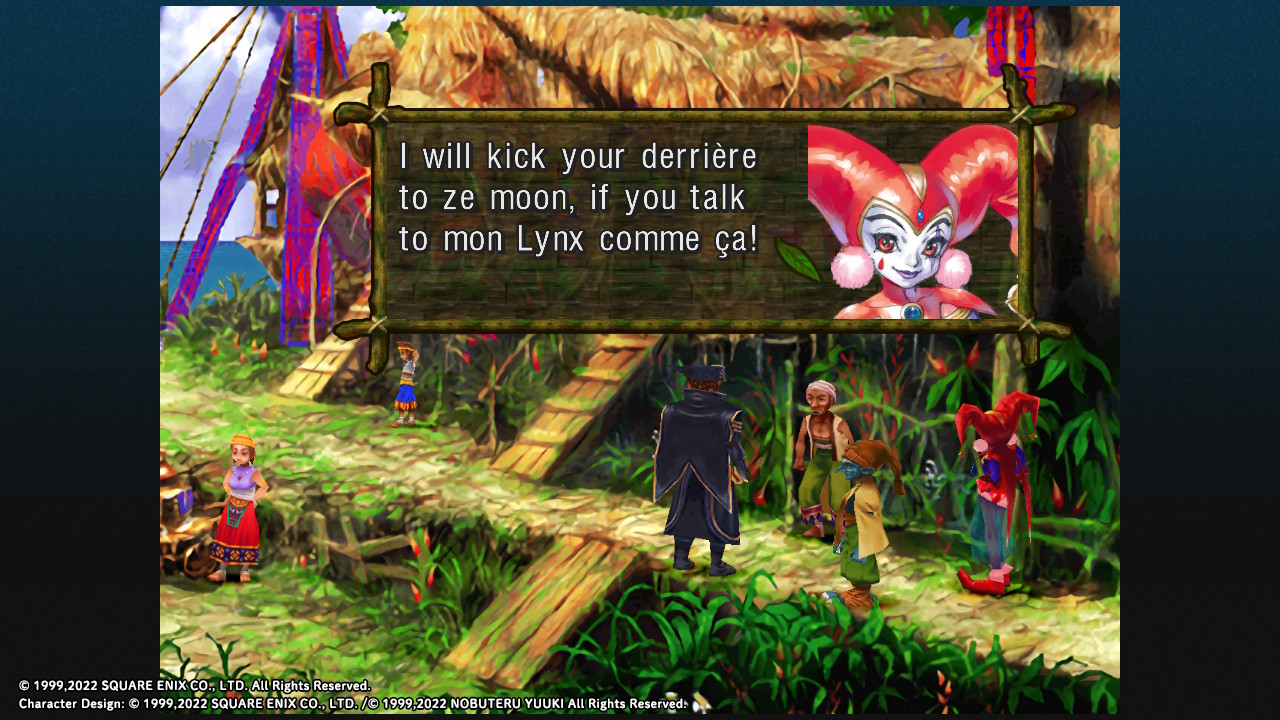 Okay, Harle’s actually only mentions ONE moon. Maybe she has better aim. The link between these two characters isn’t entirely clear, but they look the same and have the same fortune in Termina. The best theory I’ve seen is that they’re both clones of Schala, the Dragon God choosing that form due to its link with the Frozen Flame.

Another interesting connection I saw on a website was that of Lynx from Cross to the Aztec god Tezcatlipoca, who was a very important deity, the brother of Quetzalcoatl.

The relationship between the brothers is said to have been a tumultuous one, with the two of them working together to create the world in some myths, but more often being seen as rivals. 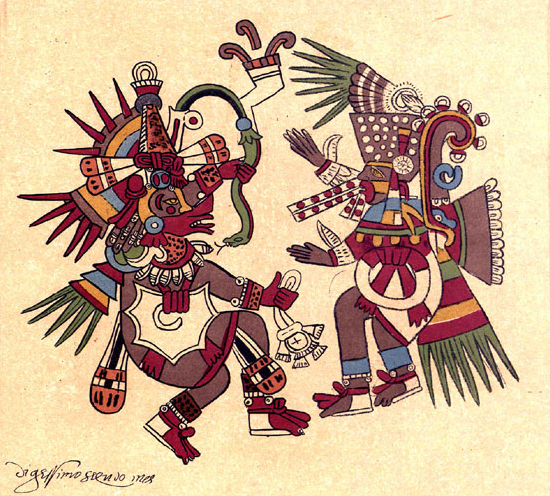 In the complex sequence of different worlds that Mesoamerican mythology says existed before ours, they fought over rulership of these worlds, often destroying them in the process. Tezcatlipoca was often regarded as the darker of the two, associated with conflict, destruction, death, and cold, as well as with obsidian and smoke. His name is generally thought to mean “smoking mirror.” Like other dark gods, however, he wasn’t purely evil, and could be quite helpful to humanity. 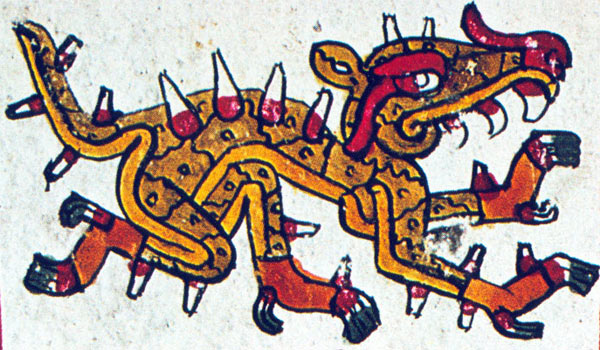 One story has it that, during creation, Tezcatlipoca baited a primordial crocodilian monster called Cipactli with his foot, which the creature ate, so the deity is often depicted with only one foot. The most important aspect to the Cross connection, however, is that Tezcatlipoca’s sacred animal is a jaguar, and is sometimes depicted in the form of one.

I assume “cat” being part of his name is just a coincidence. Lynx’s black and gold color scheme is similar to the god’s, and they both have an association with dark magic. 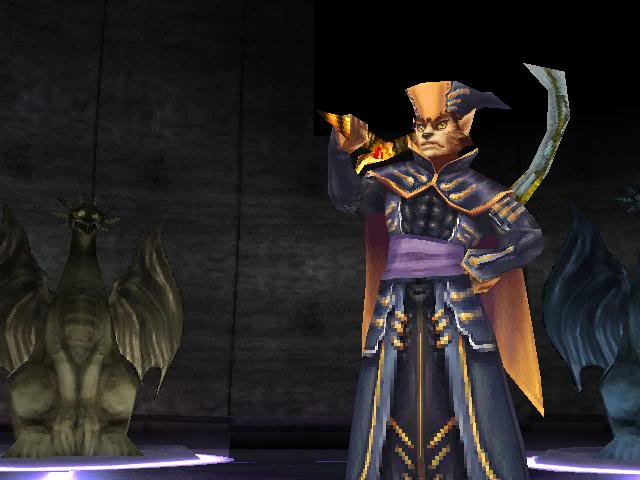 The character’s Japanese name, Yamaneko, literally means “mountain cat,” but can apparently refer to any kind of wild cat. The form he takes is supposed to be based on the “panther demon” that had attacked Serge earlier, but the term “panther” is used to refer to a few different feline species. The image from Serge’s mind looks like a black leopard, though. 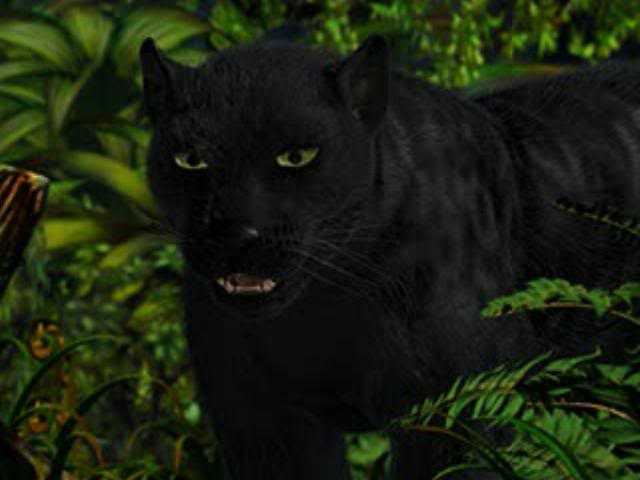 1 Response to Jaguar, Jaguar, You Are Shining from Afar