Holy Ghost in the Machine

It’s a well-known fact that, back in the earlier days of Nintendo, they censored a lot of religious references in the English translations of games. It’s stated here that their policy was to exclude “symbols that are related to any type of racial, religious, nationalistic, or ethnic group, such as crosses, pentagrams, God, Gods (Roman mythological gods are acceptable), Satan, hell, Buddha.”

Crosses were removed, Holy spells and items became White ones, and the term “devil” was replaced with monster names with less religious connotations. To be fair on that last point, it appears that the Japanese use a word that most closely translates to “devil” for a lot of things that have nothing to do with Satan, so changing it kind of makes sense in those cases. It’s kind of weird that a majority Christian nation would want to REMOVE Christian iconography and terminology, but maybe it was more because the games tended to freely mix these things with other religions both real and imaginary. If it were simply an objection to a fictional equivalent of Christianity existing in a fantasy world, then you’d think the Chronicles of Narnia wouldn’t be so popular with Christian audiences.

One interesting thing I found out recently is that the Zelda series was fully intended to be overtly Christian in some ways, as seen in such things as the cross on Link’s shield and the book you can use to shoot fire with a magic wand being called a Bible.

The English translation simply called it a “magic book,” although there was still a cross on it. Mind you, I’ve read the Bible, and I don’t recall the passage that tells you how to generate fire to smite enemies. There’s a part in A Link to the Past where Link crosses himself while praying, and the official Japanese Player’s Guide for the game includes artwork of him praying in front of what’s clearly Jesus on the cross.

Ocarina of Time pretty much put the kibosh on the idea of Hyrule being a Christian nation by giving it its own religion, based on three goddesses associated with the three pieces of the Triforce.

Din, Goddess of Power, is associated with fire and the creation of the land. Farore is Goddess of Courage and of life in general. Nayru specializes in wisdom, including law and order. These names also appear in the Oracle games as those of the Oracles of Seasons, Ages, and Secrets, respectively. I don’t think it’s ever specified whether they’re avatars of the goddesses or just named after them.

These three are not the only deities worshipped in Hyrule, but they seem to be the creators and the most powerful, as well as the most remote. Another goddess, Hylia, is a protector of the sentient beings of Hyrule, and incarnates in different princesses named Zelda. 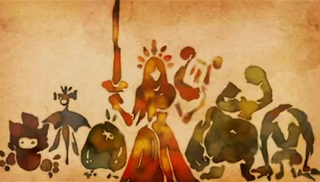 Other Hyrulian gods tend to be much more local, the sort that you might run into while off on an adventure. Interestingly, even though Ocarina removed the religion of Hyrule from any real-world one, it also used a specifically Islamic chant in the background music for the Fire Temple, which was changed for later releases of the game. This page has a good write-up on aspects of different real-world religions were incorporated into that of Hyrule. For that matter, does the name of the Tower of Hera in LttP suggest a familiarity with Greek gods?

Trios are pretty common among gods, including some that are the same individual in three parts (as in the Christian Trinity or the big three in Hinduism), and others who divide responsibilities among three different gods (like Zeus, Poseidon, and Hades in Greek mythology). So it’s not too surprising that we’d also come across a trio of goddesses in another video game, Final Fantasy VI, which actually predates any mention of the goddesses of Hyrule (at least as far as I know). Here, three goddesses known as the Warring Triad are credited with creating magic, and with devastating the world by fighting against each other.

When they realized how much damage they were doing, they turned themselves to stone and banished themselves to a sort of pocket universe, predicting that chaos would result if the statues were moved out of position. Not surprisingly, Kefka does just that after accessing the Esper World. The Japanese names of the goddesses are apparently difficult to translate. One of them is just known as Goddess, and her magic is most closely associated with storms. Demon or Poltergeist is a wrathful being who attacks with fire spells. And Fiend or Doom, depicted as a winged blue devil, prefers icy spells and is weak against holy magic. Artist Tetsuya Nomura originally gave the goddesses more proper names, but they were never used in the game itself. Goddess is Sophia, after the Greek name for the embodiment of wisdom (which I guess also makes her comparable to Nayru). Demon is Zurvan, after the creator of Ahura Mazda and Angra Mainyu in an archaic form of Zoroastrianism. Fiend is Sephiroth, like the emanations of God in Kabbalah, and of course a name used in the next FF game for a guy who tries to become a god.

One game series in which religion plays a major part but you wouldn’t necessarily know it from the early English translations is Dragon Quest. The Dragon Warrior versions remove the crosses from churches, and refer to the buildings themselves as Houses of Healing. Oddly, the symbol they use to replace the crosses is similar to the Star of David, which strikes me as a rather pointless switch if they’re trying not to offend anybody.

Mind you, you wouldn’t think the cross would be used as a religious symbol unless the religion involved crucifixion, but there were certainly symbols similar to the cross before Jesus’ lifetime, so who knows? In Dragon Warrior IV, the priests were referred to as shamans. Of course, churches in our world don’t do a whole lot of restoring people to life. In the DS versions of the DQ games, the religion comes across as largely Catholic, with abbeys and nuns. I do find it kind of odd that the Temple of Dharma became Alltrades Abbey in DQ6 and 9, as it was previously more of a Hindu or Buddhist place than a Christian one. 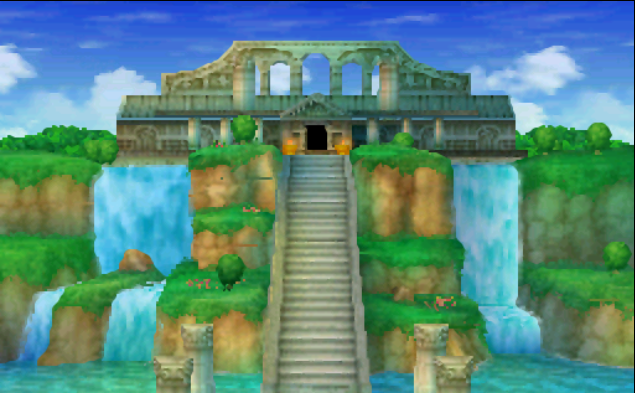 In DQ3, it’s even located in the Himalayas. But then, the religion isn’t totally Christian despite having Christian elements. As I mentioned in this post, many of the DQ games incorporate monotheism, with an almighty Goddess in the Zenithia trilogy and a male God in the next three games. The Zenithia games also have a Dragon God, known as Master Dragon or the Zenith Dragon, but he himself admits he’s not all-powerful and is subservient to the Goddess.

Mind you, video game gods are rarely omnipotent or omniscient, or couldn’t they do everything without your help? Then again, you could use the same argument about religion in our own world. Still, when God has to be revived in DQ7 and pretty much every game in the series has your party kill a being basically equivalent to Satan, it hints at a certain level of vulnerability. DQ9 has the most complex mythology, with the world having been created by Zenus the Architect, who eventually came to hate his creation and try to wipe it out. His daughter Celestria saved the world by turning herself into a tree, with the condition that only the kind and unselfish acts of mortals could restore her to her true form.

Zenus ends up split into ten parts, presumably through Corvus‘ influence. I kind of like the idea that I saw proposed once that Celestria is the Almighty Goddess of the Zenithia games. I’m currently playing the Game Boy Color version of DQ3, and its priests refer to gods, plural. Rubiss is also a goddess of sorts, although she’s obviously not all-powerful as she falls victim to Zoma’s curse. I understand that this remake also has a dragon known as Divinegon living in a place above the Earth called Zenith, who might be the same as the Dragon God in Zenithia.

4 Responses to Holy Ghost in the Machine