Since our President-Elect is in love with Vladimir Putin and insists that everyone should constantly say “Merry Christmas,” I guess we’d better learn about Christmas in Russia, right? It might seem a little late for this, but Orthodox Christmas is today. And I didn’t get anything for anyone! The difference is due to that in the Julian and Gregorian calendars, with the Orthodox Church still using the former. It appears that the sixth of January was a popular date for the celebration of Christmas even before that, however. There were some arguments that Jesus’ birth, the visit from the Three Wise Men, his baptism, and the wedding at Cana when he turned water into wine all happened on that same date. When 25 December became the official date for the celebration of Jesus’ birth in most of Christendom, the twelve days sort of bridged the gap between the two, although they’ve largely fallen out of favor nowadays. It’s increasingly common for sales and countdowns to claim the twelve days happen BEFORE the twenty-fifth rather than after. Anyway, the traditional way to wish someone a happy Christmas in Russian is “S rozhdyestvom Hristovym,” literally “Congratulations on the Birth of Christ.” (You really should be saying that to Mary, shouldn’t you?) I believe the more popular expression these days is “Schastlivogo Rozhdestva,” or “Happy Christmas.” From what I understand, it was traditional in Russia to have a twelve-course meal in honor of the twelve apostles on Christmas Eve (i.e., the night of 6 January). The celebration of Christmas was frowned upon in the Soviet years, but a 1936 argument that many of the traditions were authentically Russian and weren’t really religious led to some of them being transferred to New Year’s.

Russia has its own version of Santa Claus in Ded Moroz, a much older figure than Father Christmas, yet with traits that weren’t adapted until fairly recently. The name looks like “Dead Morose” in English, and the literal translation isn’t that much cheerier: “Old Man Frost.”

Presumably originally a winter demon or sorcerer, there were tails of his killing people, kidnapping children, and demanding tribute. The fairy tale “Morozko,” or “Father Frost,” fits him into the archetype of supernatural beings who reward or punish based on how people treat him. Around the nineteenth century, he was softened to become a gift-giver equivalent to Santa, perhaps because there wasn’t much future in orphaning peasant children.

Depictions tend to show him in a full-body blue coat, felt boots, and a roundish hat, carrying a staff. 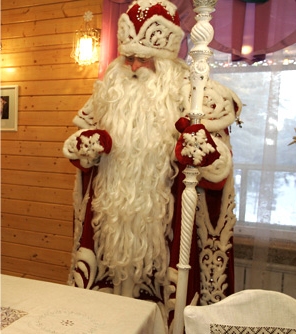 The coat can actually be in one of several different colors, including the more Santa-like red, but it’s when he’s wearing blue that you can be Ded certain who he is. As an article I came across a month or so ago (EDIT: but that no longer seems to be up) indicates, he’s more bad-ass than Santa.

He tends to knock on doors instead of going down chimneys, and he rides in a sleigh pulled by three horses.

Contrary to this picture, I don’t believe the three are usually melded together into one super-horse.
As of 1998, his official home is Veliky Ustyug in Volgogda Oblast, at least according to the Mayor of Moscow. Ded Moroz is often accompanied by a young woman called Snegurochka (Snow Maiden), most commonly identified as his granddaughter, although I’ve seen a few sources referring to her as his daughter or goddaughter.

The character seems to have her origins, or at least her modern interpretation, in a tale about the daughter of the personifications of winter and spring (Ded Moroz being the former) who melts when she falls in love.

The story became a popular play and an opera by Rimsky-Korsakov. I have to wonder if the Rankin-Bass Jack Frost, in which the titular character is a winter spirit who falls in love with a mortal but she marries someone else instead, is an Americanized take on this tale. Terry Pratchett’s Wintersmith also has similarities in its plot. Snegurochka’s role as Ded Moroz’ companion dates to Soviet times.

I understand some modern celebrations also have Ded Moroz and Snegurochka battle Baba Yaga, who wants to steal all the presents.

2 Responses to A Frosty Reception