You know about Dig Dug, right? If not, I wrote a bit of an overview on it before. It has creative gameplay, featuring a hero who digs tunnels and inflates enemies with an air pump. While the hero was simply known as Dig Dug at first (maybe it could have been short for Digory Douglas), his official name was later established as Taizo Hori, a play on the Japanese for “I want to dig.” He would reappear in the 1985 game Dig Dug II, which takes place above ground and has Taizo destroying islands.

I hope he has a good reason for that. Anyway, perhaps inspired by how Pac-Man would obtain a wife and child, Namco would also give Taizo a family. His wife is the protagonist in Baraduke, a game from 1985 that has still only been officially released in Japan. It involves a character in a spacesuit floating around an alien world and shooting invaders in order to rescue the friendly one-eyed Paccets.

In every level, you have to unlock a gate to the next one, gradually progressing deeper into the planet. The main enemies are the cephalopods called Octis, but they control other creatures as well. There’s sort of a cameo in that one sort of invading alien, the Baggans, look like purple Pac-Men with sharp teeth.

If you finish the game, you find out the protagonist is female.

Yeah, it sounds a lot like Metroid, which came out the following year. I don’t know whether there was any direct influence on that game or not. The heroine was called Kissy at first, but her official name is Masuyo Tobi, wordplay on “I can fly.” I mentioned before that they have a son named Susumu Hori, hero of the Mr. Driller series.

The first of these games came out in 1999, and it looks like a bit of a throwback in some ways, with pretty simple gameplay. The graphics are in a cute, comical anime style, not at all realistic but hardly anything they could have rendered back at the time of the original Dig Dug. A bunch of brightly-colored blocks has come up from underground, and Susumu has to drill through them to get to their source 1000 meters underground, while also making sure they don’t fall on his head and that he doesn’t run out of air.

Blocks of the same color will disappear when they come into contact with each other. Susumi has two brothers who also appear in the games: Ataru Hori, who is also a driller; and Taiyo Tobi, who gets claustrophobic underground and is training to be a pilot.

Susumu has a pet dog, and Ataru a rabbit. The 2005 game Dig Dug: Digging Strike features the whole family, beginning with Taizo, now honorary chairman of the Driller Council, being jealous of his own son, and hence responding to a call for help from the island nation of Horinesia to Susumu on his own.

Monsters have invaded during a dig for fossils, and Taizo has to destroy them. The gameplay is a mix of the first two Dig Dug games, with what you do underground affecting the surface.

There are boss monsters who can only be beaten by sinking the land on which they’re standing.

Susumu does show up to help out occasionally. I can’t help but see a bit of Cranky Kong in Taizo, a classic video game character longing for his glory days and being somewhat bitter toward his successors. I would imagine he’s not that fond of Mr. Do either. He also apparently ages in real time, being twenty-seven at the time of the original Dig Dug, forty-six when playable in Mr. Driller G, and presumably fifty for Digging Strike. I don’t know if other Namco characters age that way, but I’m curious as to what an elderly Pac-Man would look like. 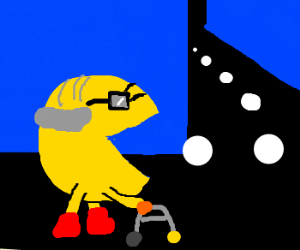 Picture by Crafty Barnardo
In an ending that you can only see if you complete all of the bonus stages, Masuyo surprises Taizo, who has blown off a date with her to receive accolades from fangirls.

The two of them are officially divorced according to Namco, and this might be part of why. According to the Mr. Driller Wiki, he’s also not that bright and hardly ever home. And while Taizo still gets on pretty well with Susumu despite his professional jealousy, he’s estranged from Ataru. I suppose Namco wasn’t going for Happily Ever After with these related series; it kind of seems unprecedented in games that are more on the cute, funny side than the dark and gritty one, although I could be wrong about that. I understand there was also a 2005 game that included both Namco and Capcom characters, but so far I don’t think Masuyo has met Samus Aran.

Picture by Myke Greywolf
Maybe there’s a chance now that Pac-Man is in Super Smash Bros., though.

My original goal with this post was to write about a few other character connections between different game series, but I ended up saying so much about the Hori/Tobi family that I should probably leave the others for later.