The International Wizard of Oz Club’s map of the countries surrounding Oz includes a few places, mostly in the southeastern part of the continent (which most likely isn’t technically a continent), that were never directly linked with Oz. They are, however, from fantasy stories written by L. Frank Baum, so their presence makes a certain amount of sense. The relevant stories are “The Witchcraft of Mary-Marie,” “The Queen of Quok,” “The Runaway Shadows,” and “The King Who Changed His Mind.” I also remember seeing an altered version of the map that placed Whatland from Baum’s take on “Old King Cole” in the same area, but I’m not sure who drew that. These are all self-contained sorts of tales except for “Shadows,” which incorporates the Forest of Burzee that shows up in several other Baum non-Oz works as well as the map on the Tik-Tok of Oz endpapers.

It’s indicated here that Burzee isn’t far from the Kingdom of Thumbumbia, where Jack Frost froze the shadows of the unnamed prince and his cousin, Lady Lindeva.

The king dies while the shadows are missing, and the nobles refuse to allow either of the shadowless children to take the throne. Once the shadows return, the prince becomes king, and he later marries Lindeva. The only other identified official is the Earl of Highlough, referred to as “the chief man in all the kingdom.”

Quok is obviously the setting for “Queen,” and the story mentions Bilkon, Junkum, Mulgravia, and the Republic of Macvelt as neighboring countries. Those first two have “bilk” and “junk” right in their names, and even Mulgravia sounds rather snooty and dull. I imagine it as a bland place with haughty nobility. I didn’t realize at first that Macvelt was actually named after the President and Vice President of the United States at the time, William McKinley and Theodore Roosevelt. I can only imagine that the nation referred to as a republic is a favorite target of the Heelers of the Shifting Sands, who eat votes. I’ve considered Junkum being known for recycling and selling garbage, and perhaps for ships, even though it’s shown as landlocked on the map. As for Quok itself, it was ruled by a king who bankrupted the country, and after he died the officials tried to sell the right to marry the young heir. The winner of the auction was a certain Mary Ann Brodjinsky de la Porkus, an old and unappealing woman; but the young king managed to obtain his own fortune through a magical being bound to his bedstead, in the form of a purse that is never empty. Unfortunately, only twenty-five cents at a time can be taken out of it. The king doesn’t have to go through with the marriage, and instead marries the armorer’s daughter Nyana; but since the chief counselor loses Mary Ann’s money, he has to pay her back millions of dollars in increments of twenty-five cents. The story ends with the two of them just standing around and carrying out the transaction for years afterward. I wonder if they ever finished, and what happened to them after that.

It seems that Quok and its neighbors use American (or British Commonwealth) denominations for their currency. The name of the nation is similar to that of the dragon Quox from Tik-Tok, and Gregory Maguire’s map of Oz shows a place called Quox lying to the southeast of the land.

The country in which “Witchcraft” takes place is never named in the text, but it does contain a city called Ribdil, so James E. Haff and Dick Martin used that as the name of the country as well. The city is on the other side of some mountains from the king’s palace, but that isn’t necessarily significant. It’s ruled by King Gruph, a nasty man who hired the magician Gurd to turn the true heir, his nephew Melra, into an old woman. Melra studies witchcraft in order to get revenge, learning that the magician would lose his power if he ever spilled any of the King’s blood. Gurd is able to track Melra, however, so he (actually “she” at that point, I guess) recruits a girl named Mary-Marie to learn witchcraft and turn Gruph into a goat, then trick Gurd (who is a butcher as well as a magician) into killing him. Melra takes the throne and marries Mary-Marie, meaning Ribdil was at least at one point ruled by two witches. Mary-Marie originally lives in a hut beside a path to the Kingdom of Aurissau, which lies in a valley beyond a nearby mountain.

Aurissau at the time had a Princess Pritikin, and Mary-Marie disguised herself as her while visiting King Gruph. Haff and Martin place the jackdaws’ nest from The Marvelous Land of Oz in Aurissau, despite the Ozites who visit it thinking it’s in America.

The Gump flies over “rolling plains” before reaching the mountain range where the nest is, so when I used Aurissau in one of my own stories, I made it a grain-growing country. The paper money the Ozites find in the nest is in dollars, but that makes sense if it’s near Quok. The map also places Handy Mandy‘s home of Mount Mern on the far east of Aurissau, and the Kingdom of Scowleyow from The Magical Monarch of Mo to the west. 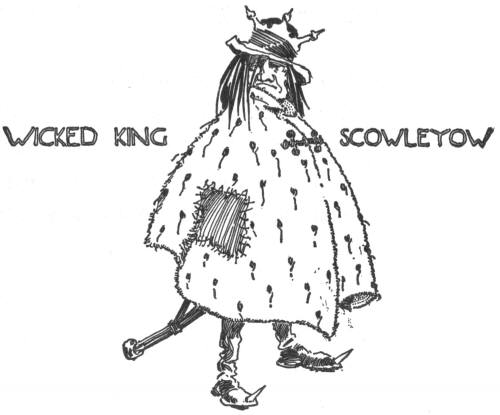 Finally, we come to Arol, setting of “The King Who Changed His Mind.” The ruler of Aurissau hates children so much that, possibly inspired by tales of Herod, he orders them all killed, including his own son. The banished fairy Hallita from the Groves of Trom, which are shown on the map as part of Burzee, gets the king to rescind his order by turning him into a child.

One other place I came across the word “Arol” was the name of a commune (possibly cult) leader. Apparently her real name was Carol, but she went by Arol, and she and her husband founded a commune called Zendik, which apparently disbanded soon after Arol died in 2012. I wouldn’t think this was particularly relevant if it weren’t for the fact that Zendik used a logo that was quite similar to the combined O-Z. Not intentional, perhaps, but an odd coincidence.