A Portable Port of a Prequel 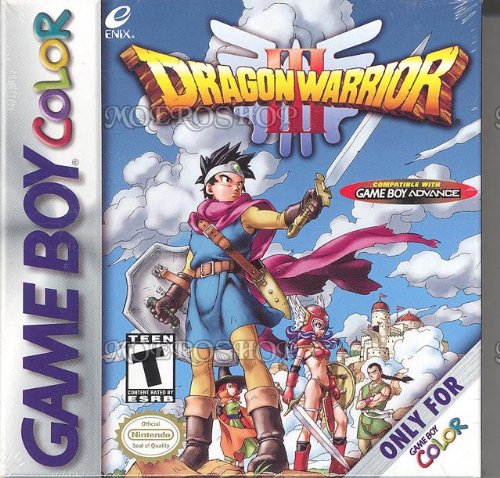 I finished the Game Boy Color version of Dragon Warrior III last week, so I might as well say a bit about it. You probably already know this, but the series was always Dragon Quest in Japan, but became Dragon Warrior in the United States due to trademark issues. Since 2005 (I think), it’s been Dragon Quest all over. My brother and I played DW3 a lot back when it came out, first renting it at the corner drugstore and eventually buying it. This was actually BEFORE we’d played DW2, over which 3 is a vast improvement in many ways. It introduces a customizable party, elementally specific magic, a day/night cycle, and air travel to the series. And it’s a lot more forgiving than the second one. For me, one of the most significant improvements was that you could use the Return spell (Zoom in later translations) to go to pretty much any town you’d been before, not just where you last saved. No more having to travel around half the world to try a dungeon again! It’s also a prequel to the first game, letting you see the history of the game’s world, even though the title suggests otherwise. I guess the third Zelda and Castlevania games were also prequels, although now all three series are all over the place time-wise. Only the end of the game is set in Alefgard, though, the rest taking place in a world modeled on our own Earth.

I remember the game came with a manual that explained pretty much everything (even when we rented it, which was very rare), which made things a lot easier in terms of figuring out where to go. It kind of seems like cheating in retrospect, but there were some parts I probably wouldn’t have figured out on my own, and they didn’t have online walkthroughs back then. Well, maybe they did, but I wasn’t on the Internet.

I remember most of the game well enough that I could do a pretty straight run-through on the Game Boy version. (Well, it technically took me a few years, but that’s because I put it aside, not because I got stuck.) The mechanics were largely the same as on the NES as far as I could tell, although there were a few noticeable changes, many for the sake of convenience. You can talk or search with a single button and automatically open any door for which you have the key just by walking through it, instead of having to use a text menu for everything. I assume the menus were largely to emulate early PC turn-based role-playing games, where there were a whole lot of commands that weren’t relevant to most situations. In DW1 for the NES, you even had a command to go up or down stairs.

The first Final Fantasy, released in between DQ2 and 3 (although I think it came to North America before DW2), let you do basic things without accessing the menu, so it’s not like it wasn’t possible on the NES. The GBC also lets you search dressers and pots (although you can’t break the pots like you can in the DS DQ games; I guess Link must not have gotten to the DQ heroes yet), go into wells, collect tiny medals that you can trade for items, and play a board game, all innovations originally introduced in later DQ titles. 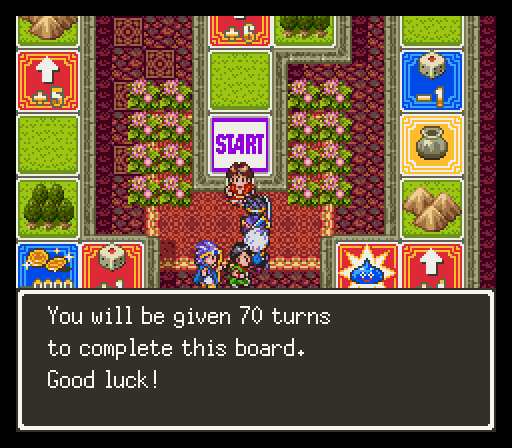 This picture was obviously not from the Game Boy, but the Super Famicom one had the same additions.
A personality system was also added, with the hero’s main trait initially determined by a series of questions before you begin the gameplay proper, like in Ultima; but it can be changed with various books you can find on bookshelves throughout the world. Personality affects stat growth, but I can’t say I understood how. 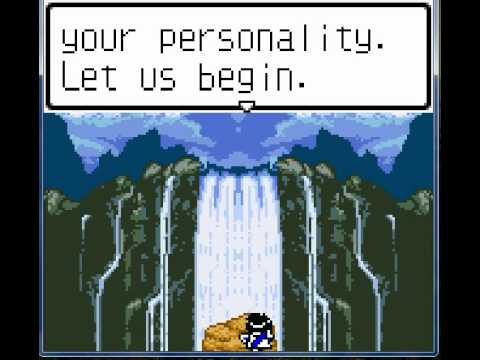 There are more accessories you can equip to affect various statistics; but the most significant change is that you can now carry basically unlimited items in a bag. The NES DQ games all had very limited inventory space, which meant either selling or throwing out items you didn’t need. DW3 introduced the vault, where you could store items for later, but the bag makes that unnecessary. You can’t access the bag during battle, so you still have to plan ahead a bit in terms of what individual party members carry, but overall it makes things a lot easier, possibly too easy for seasoned players who had gotten used to the item rationing, but I can’t say I minded it. The vault is still there for saving money, which is convenient as you still lose half your cash on hand if your party is wiped out.

The text has been streamlined a bit, probably due to space restrictions, but the gist of it is still there. 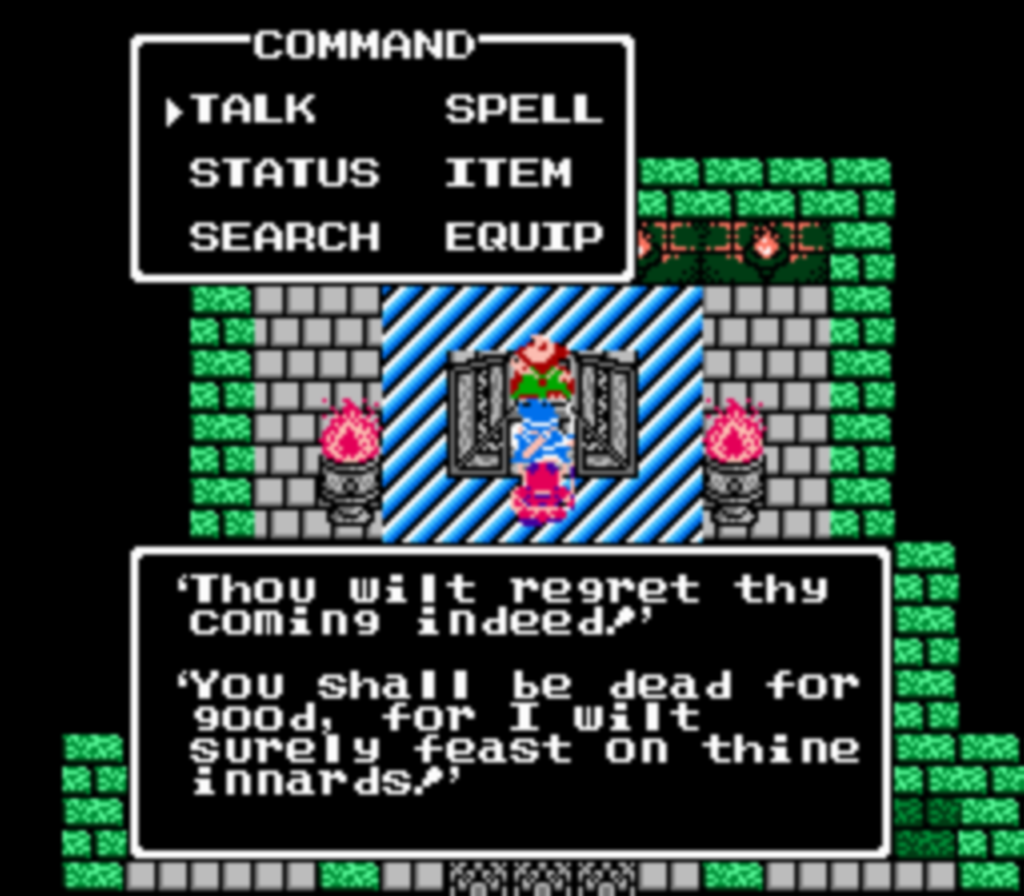 Unlike in the first two English-language DW games, most of the characters in DW3 don’t use faux-Elizabethan dialect, the exceptions mostly being kings and demon lords. Everyone speaks even more succinctly here, although some of the translations that didn’t make sense on the NES do here. It does do the rather obnoxious abbreviation of item names, often using symbols for types of weapons and armor, and it can be difficult to tell which symbol means what. The town names are mostly the same, although Assaram has become the less vulgar-looking Ashalam, and Jipang Zipangu. I believe the names in Alefgard are in line with what was used in the GB versions of DW1 and 2, which I do own but haven’t played, so I’m not even totally sure the cartridge still works. The English NES translations tended to eschew direct translations of names in favor of ones with sort of an Arthurian feel, like Ladatorm Castle becoming Tantegel Castle, obviously inspired by Tintagel Castle in Cornwall. The only town names that remained basically the same was Rimuldar. DW3 mostly stuck with these names, although the translators apparently forgot that Yukinov’s name had been changed to Wynn. Also, King Lars was King Lorik in English, but the King of Alefgard in the NES DW3 was called Raosu, a bad transliteration of the Japanese. While he was a different king, they were originally both named Lars, which the GB translation sticks with in both cases. I’m sure part of the reason for the change was that some of the names were originally shorter, like Loto instead of Erdrick or Lora instead of Gwaelin. That doesn’t explain why Cantlin was changed back to Mercado when they’re the same number of letters, but maybe that was for the sake of authenticity.

Anyway, it was fun and nostalgic to play through this again. I haven’t tried the bonus dungeons yet, but maybe I will at some point. I did notice that, after beating Zoma and starting again, it still gave the hero’s class as “Hero,” while it became “Erdrick” in the NES game.