At the most recent OzCon International, I was on a panel about animals in Oz, discussing, among other things, whether they have the same rights as humans. It went off track a few times, but some interesting topics came up. One thing that was mentioned was the part in Eloise Jarvis McGraw’s The Rundelstone of Oz where some Ozian animals didn’t talk, and no one really seemed to think it was unusual. The book states, “All animals in Oz can talk, but few bother to do so–some because they find human conversation none of their concern, others because they have nothing important to say, still others, such as worms and polliwogs, because their accents are so thick they can’t make themselves understood anyway.” While this seems reasonable enough, in this particular case the animals are trying to communicate with people, so it seems like they’d at least try human language.

These animals are later revealed to be under enchantment and probably magically prevented from talking. Also unable to talk is the pony Lollipop in Gina Wickwar’s Toto of Oz, and the Sand Witch Pita states that water magic is “the only kind that can prevent an animal in Oz from talking.”

Whether there’s water magic involved in the Rundelstone enchantments or in the fact animals can’t talk in Samandra, I couldn’t say. Samandra does take away the ability of native Ozian animals to talk, while such doesn’t always seem to be the case in other fairy countries. Kabumpo has no problem talking while in Ix, even though native animals don’t seem to. At least, in Queen Zixi of Ix, the Ixian army doesn’t consider that the dog Ruffles could be talking, which he only does due to a wish on the Magic Cloak. And why Billina could talk upon reaching Ev but Hank the Mule presumably couldn’t is also unclear.

Indeed, Nanda, Princess Langwidere’s maid, thinks it’s unusual that Billina can talk; and the Wizard of Oz suspects Bilbil the Goat is under an enchantment because he talks in the Nome Kingdom.

Toto could presumably talk all the time he was in Oz, but he didn’t want to until Tik-Tok. There are a few Ozian animals in Ruth Plumly Thompson’s books who don’t talk, which is unusual considering how much she appears to have enjoyed writing animal dialogue. There’s a scene in Jack Pumpkinhead where a hunting dog in the castle of Baffleburg gives Peter Brown the Sauce Box without saying a word. In fact, I don’t think any of the animals in Baffleburg are said to talk, which could have to do with their origins, as the horses shrink down with the people when the Forbidden Flagon is opened. Or maybe they just don’t want to talk. I also remember a donkey in Purple Prince helping Randy search for the missing royal family of Pumperdink, but never speaking.

While Baum doesn’t really get into whether the more civilized animals of Oz eat each other, or whether people eat them, Thompson seems to have been a little more callous on the subject. I’ve mentioned the talking goose Mombi plans to cook for dinner in Lost King, and Snip isn’t surprised by this either, so it’s not like it’s just Mombi breaking the rules. In Ojo, Realbad cooks “two wild fowl he had snared on his way through the forest” and steals from a nest of wild duck eggs. And Gnome King has the Wizard eating chicken even though it’s explained in Emerald City that people in the city never do. I suppose it could be something similar to but not actually chicken, though. Perhaps most meat in Oz grows on trees, but there are these occasional exceptions with nobody seeming to raise an outcry. Then again, maybe the authorities never find out. Thompson is also pretty clear that animals in Oz don’t die. As early as Cowardly Lion, Tazzywaller cuts a lion in half with his scimitar, and the front half escapes.

The half-lion shows up later in the story, still very much alive but quite depressed; he says he does everything half-heartedly because half his heart is missing. 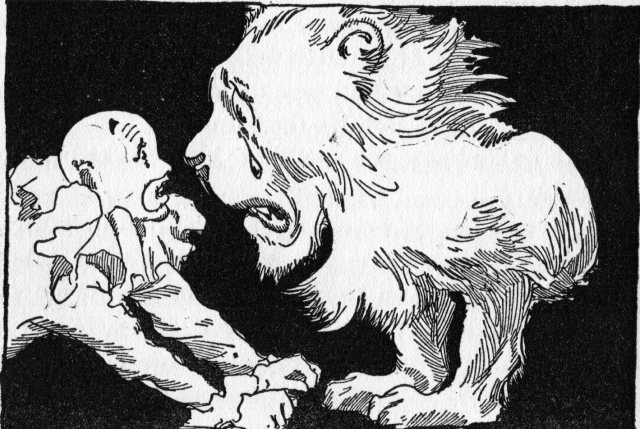 The back half remains alive as well, and Ozma eventually puts them back together again. On the other hand, the Combinoceros in Purple Prince and the Snoctorotomus in Ojo, when the former is stabbed and the latter beheaded, are alive but knocked out, unlike the still active halves of the lion.

Thompson explains, “People and animals can be overcome for a time but not forever.” This means that animals being prepared for eating might not be fully conscious even if they are technically alive, but it’s still pretty morbid.