Picture by BlazingDazzlingDusk
Although a lot of people keep small ones in their houses, the cactus is a pretty terrifying plant, so I’m not surprised that some video games use them as enemies. The two that immediately come to mind are Pokeys from the Super Mario franchise and Cactuars from Final Fantasy. The former is a Super Mario Bros. 2 enemy, which means it was originally from Doki Doki Panic. They were one of the first SMB2 monsters to show up in another Mario game, as they’re reintroduced in Super Mario World, along with Ninjis. Pokeys have become pretty standard in the series since then. In SMB2, like most enemies, you could stand on their heads and ride around on them. You could throw them, but only one segment at a time. A Pokey that loses a head will have it replaced with the next segment down.

There was a Super Mario Bros. Super Show cartoon where Mario knocked the head off one, and the head was still able to bounce around and talk. In SMW, you couldn’t ride them, but the segment idea continued with Yoshi only being able to eat them one part at a time. 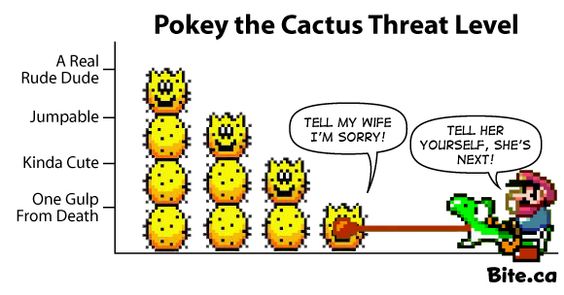 They were yellow instead of green, and had ears kind of like a cat. In later games, destroying the head will often kill the whole thing. The ones in Super Mario Sunshine will pop up from the ground and try to crush Mario, and have flowers on their heads. While they originally just slid along the ground, they later gained the ability to fall on people and to grow and fling body segments. 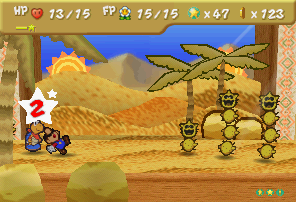 The cat ears were gradually replaced by large spikes, which isn’t quite as cute. 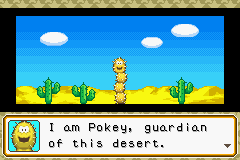 Yellow has become the standard color for Pokeys, but green ones still appear from time to time. Both Paper Mario: Sticker Star and Color Splash have green varieties with a similar design to the original SMB2 one. There are also skeletal, mummified, and snow varieties, however that works. 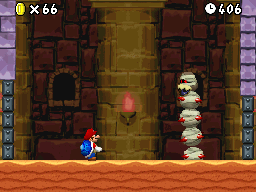 Like other Mario enemies, they make guest appearances in the Game Boy Zelda games Link’s Awakening and Oracle of Seasons, once again having to be defeated one segment at a time. 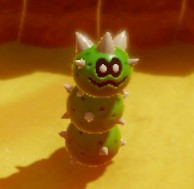 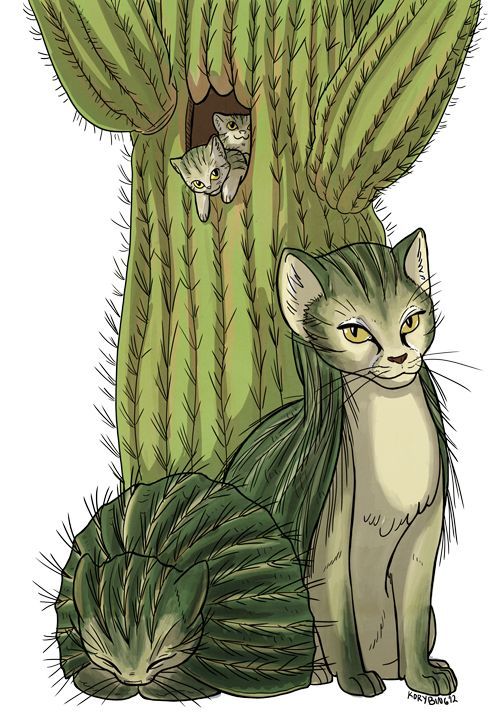 The association of cacti with cats can also be found in a book I’ve mentioned a few times recently, William Cox’s Fearsome Creatures of the Lumberwoods, in which there’s an animal called a cactus cat. Said to live in the American Southwest, they resemble bobcats, but with really thorny hair. Their tails branch into segments, and they have blades made of bone above their front feet. With these, they cut into cacti and drink the sap that comes out, and they do get drunk on it. They’ve also been said to dwell inside Saguaro cacti, and keep their kittens in these plants.

The FF enemy, the Cactuar, is one of the more recognizable monsters in the series. Like haniwa, or Gyroids from Animal Crossing, they have hollow eyes and mouths. While their poses can vary, they often look like they’re running in place. Tetsuya Nomura says he based the monster on a doodle he made as a high school student. They first appear in FF6 as Cactrots in the English translation, but Cactuar later became the standard name. The most annoying thing about these plant-creatures is that, when attacked, they will often counterattack with a technique called 1000 Needles, which will generally do exactly 1000 points of damage to a party member. 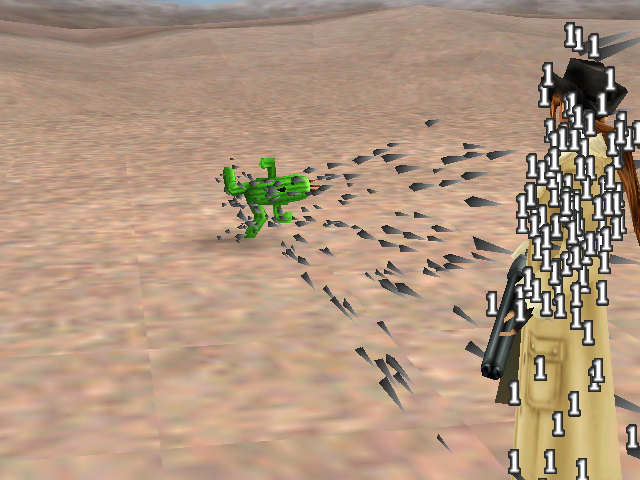 They’re sometimes summonable monsters, and the 1000 Needles attack can be learned by blue mages. And like Pokeys, they’ve been known to hide underground. A larger variety is the Gigantuar, which has an even stronger needle attack.

Apparently Mario has encountered Cactuars before, as one is playable in the two sports games that cross over with FF (a really bizarre concept when you think about it), Mario Hoops 3-on-3 and Mario Sports Mix.

I don’t know if any of them have interacted with Pokeys.

It looks like some other games do use cactus enemies, but I’m not familiar with most of them. A game for our old Texas Instruments 99/4A game, Tombstone City, had Saguaros that were identified as enemies, but they didn’t actually move around or anything. 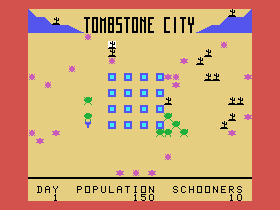 That’s the first time I came across the word “Saguaro,” by the way. In the Dragon Quest series, starting with the fifth game, there have been low-level enemies called Cactiballs, which look a lot like they sound. 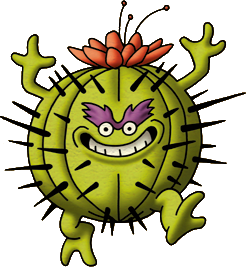 Interestingly, the Portuguese name for the Pokey is “Catubola,” or “cactus ball,” possibly because of their ball-shaped segments. Anyway, Cactiballs are pretty active, sometimes using jumping attacks. I don’t know much about the DQ spinoff Rocket Slime, but apparently they speak with Spanish accents and sometimes shake maracas. 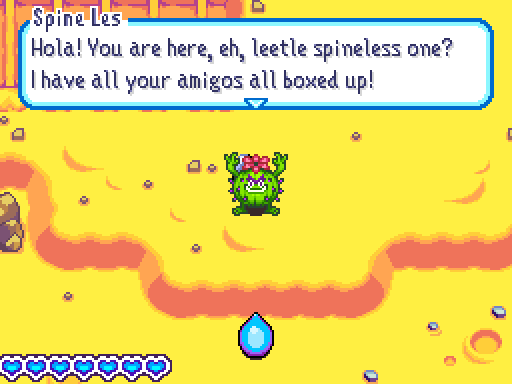