Babes in the Woods

I remember, back in high school, reading about Scandinavian tales of women living in the forest who looked beautiful and human from the front, but were hollow in the back.

I think the book just called them elves, and they do seem to fit into that general category, but so do a lot of other kinds of supernatural beings. They’re also sometimes considered trolls. From what I’ve seen online, the more specific name is a huldra or hulder in Norwegian, or a skogsra in Swedish. The Norwegian name is thought to be linked to the German goddess Holle. When looking for information on these creatures a few years back, I came across a mention of the movie Thale, which I finally watched last week. Thale actually doesn’t have the hollow back, but she does have other traits associated with huldra, a tail and the ability to charm humans.

I haven’t done particularly thorough research into the subject, but from a few overviews I’ve seen, the tail usually looks like that of a cow, but sometimes a fox’s or horse’s instead. 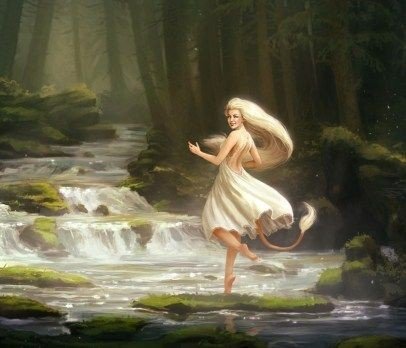 They’re also sometimes said to have other bovine features as well, like cloven hooves or long breasts that they can throw over their shoulders. The hollow backs are like that of a tree. I’ve also seen a mention of the skogsra having claws. Like most fairies, huldra can be friendly or malicious to humans, often helping them in exchange for helpful behavior on the human’s part.

Not surprisingly, they’re also often viewed as seductresses, trying to trick men into having sex with or marrying them without noticing their inhuman features. In at least one story, a married huldra loses these parts, but also becomes ugly, and gains incredible strength (or maybe she had that all along, but the man didn’t notice).

I remember a character in Piers Anthony’s Xanth series of this same sort being called a woodwife, which seems to be a more general term, and mostly associated with German folklore. They’re also attractive women who live in the forests and can either help or hinder humans, but descriptions I’ve seen focus on their diminutive size. They’re said to have pale skin and to wear flowing gowns of various colors. They’re known to ask humans for bread, but to hate caraway and cumin seeds. Wood-wives will sometimes pay those who assist them in wood chips, which later turn into gold. Their lives are often tied to those of the trees, and for some reason they’re some of the favorite game of the Wild Hunt, perhaps because they protect wild animals. They’re known to kill people who harm animals or trees, sometimes by drinking their blood. The Moss People are sometimes considered the same, and sometimes not. They’re more often described as looking like the dwarves of mythology and folklore, except also covered with moss. and being bonded to the trees. Some are also said to be attractive, however, and sometimes to have wings like butterflies.

Picture by Kettle Quill
Both groups are known to borrow items from humans but then return them along with generous gifts, and to have healing powers. They’re sometimes said, by Jacob Grimm for one, to be the children of a witchy spirit known as the Buschgrossmutter, or Shrub Grandmother. 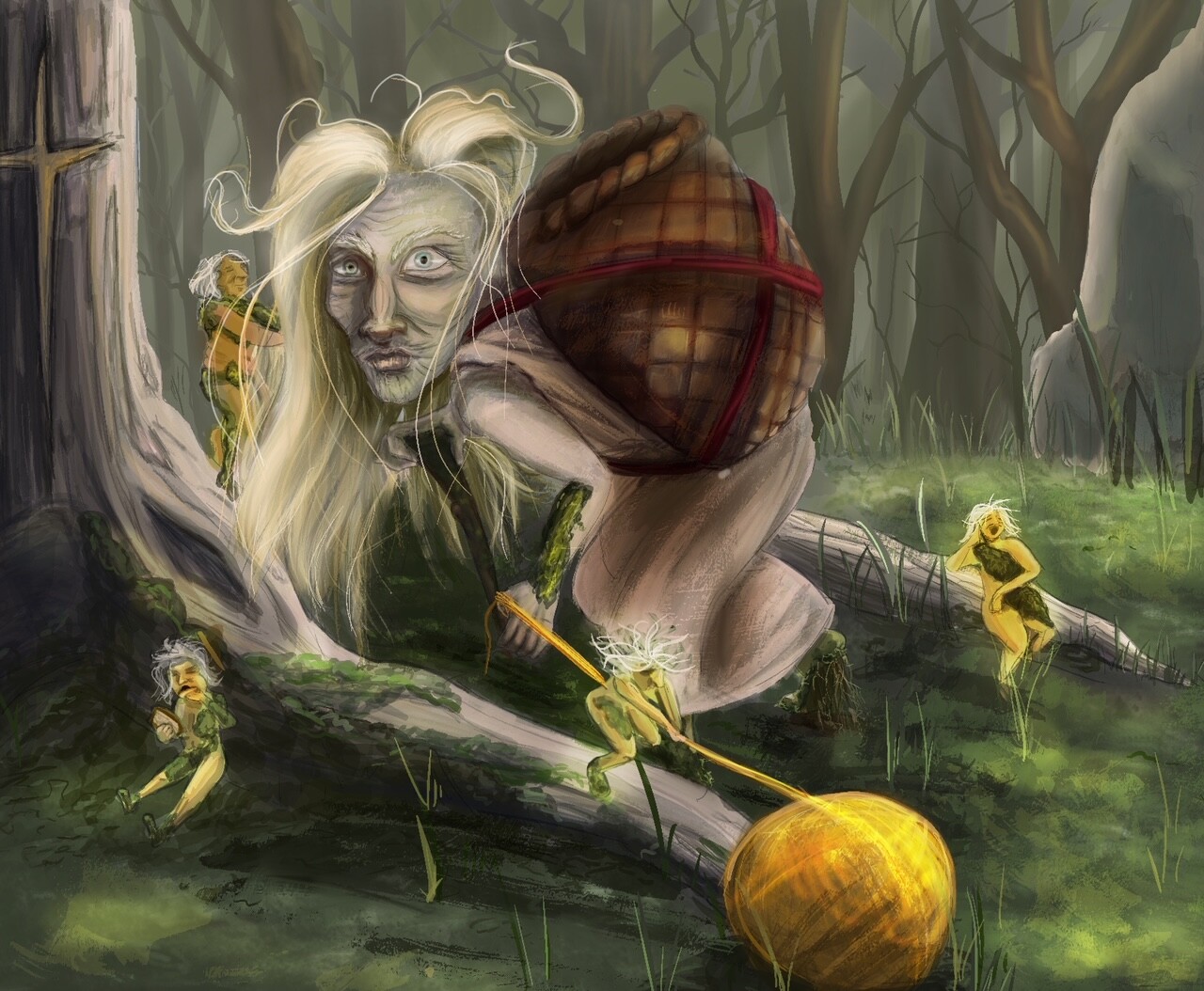 Picture by Kaiti Hylands
She’s a tiny, hideous woman, sometimes said to have an iron head and moss on her feet, and long white hair that’s messy and full of lice. She only appears to humans once a century, and will reward those who comb her hair. If you insult her, however, she’ll breathe disease onto you.

I also feel I should mention the Woodwoses, who aren’t magical, just people who live out in the woods and have more animalistic behavior than civilized humans, wearing no clothes and having hair all over their bodies. There’s kind of an ambivalence to their lifestyle, in that it’s free and simple, but at the same time rather terrifying. They’re frequently found in medieval European art, and are linked to Greek satyrs and Roman fauns, although Wikipedia points out that Enkidu from the Epic of Gilgamesh is probably the earliest example of the type in literature. 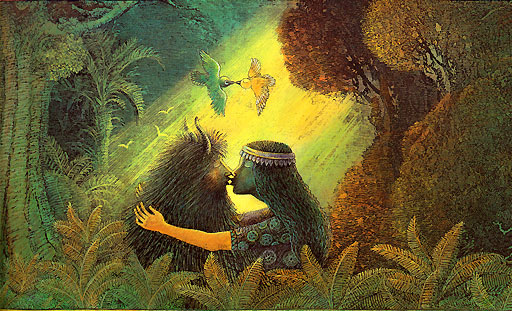 Picture by Ludmila Zeman
As I’m sure many of you know, Woodwoses show up in The Lord of the Rings, in which they’re properly called Druedain, and they help the Rohirrim evade some pursuing Orcs.