The Case of the Ozian Detectives

Since L. Frank Baum seems to have dabbled in just about every popular genre of his time, it’s not surprising that his oeuvre would include some detective fiction. In addition to some short mystery stories, he also introduced a girl detective named Josie O’Gorman in his pseudonymous Mary Louise books. Aside from some references to detective stories in The Lost Princess of Oz, however, Baum generally didn’t bring any of these ideas into the Oz series. More recent Oz authors, however, have brought their own detective characters into Oz.

I know there’s a fair amount of overlap in fans of Oz and of Baum’s contemporary Sir Arthur Conan Doyle and his famous creation Sherlock Holmes. I’ll admit I’ve never really been into Doyle or Holmes myself, but the character is such a mainstay of popular culture that it’s pretty much impossible not to know the basics about him. Mind you, I know enough to realize that a fair amount of the popular conception of Holmes is actually dead wrong, at least in terms of the character Doyle originally wrote, but that’s another topic entirely. Anyway, I’ve heard tell of a few different Holmes/Oz crossovers, but the only one I’ve actually read is Ruth Berman’s “Sherlock Holmes in Oz.” 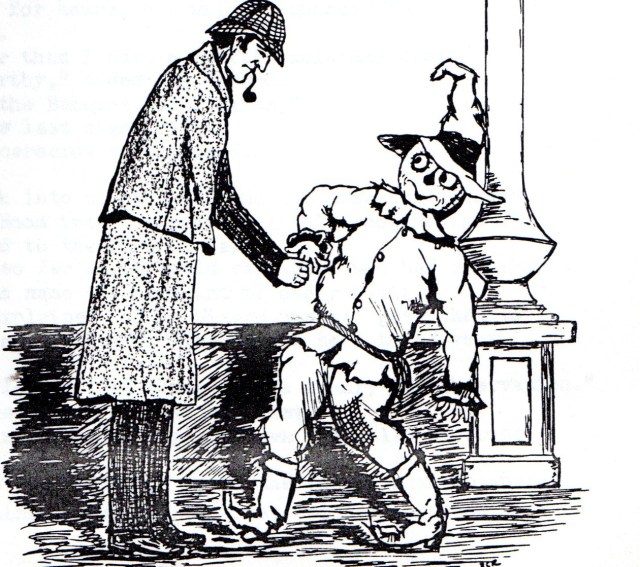 This short story appears in the very first issue of Oziana, from 1971. The plot involves the Wizard of Oz bringing Holmes and Dr. Watson to the Emerald City to assist in finding the Rainbow Pearl, a symbol of the friendship between Oz and Pingaree. While no other Oziana stories include Holmes himself, there are actually several that feature his Ozian equivalent. Known simply as the Great Detective, he lives in Room 221-B of Ozma’s palace, and helps the ruler to solve mysteries that can’t be unraveled through magic. 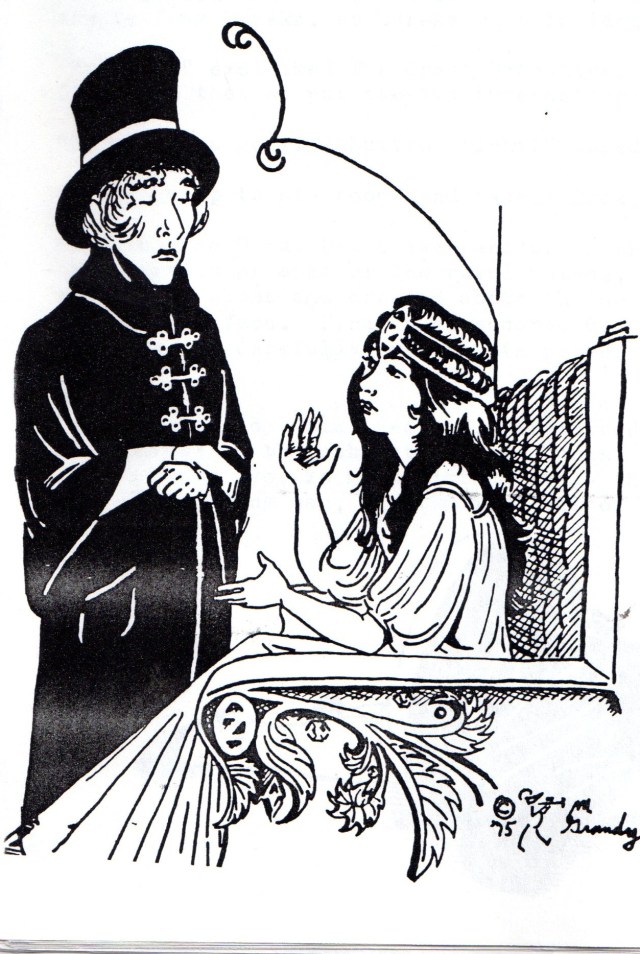 The character’s first appearance is in “The Adventure of the Cat That Did Not Meow in the Night,” published in 1976. This is technically Eric Shanower‘s first published Oz writing, although co-author Jay Delkin changed the story quite a bit from Eric’s original conception. It’s probably telling that Eric’s original title was “A Mystery for Ojo,” yet Ojo does not appear in the finished story. 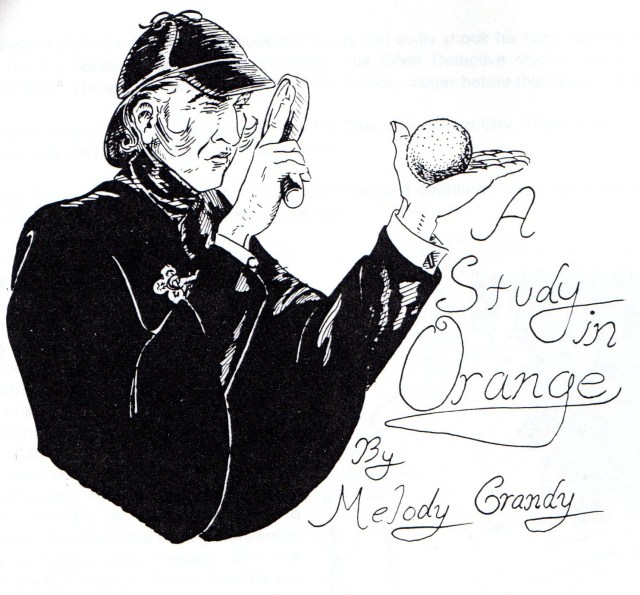 The Great Detective reappears in Vincent Ward and Delkin’s “The Adventure of the Missing Belt” (1978), Melody Grandy’s “A Study in Orange” (1980), and Delkin’s “The Mystery of the Missing Ozma” (1984). Some brief references in these stories add details to the character while parodying the original Holmes stories. We find out that the Detective has a dog called Ozzy, is rumored to have fallen down the Ozenbach Falls, and once had a rival named Moriozty. The closest he has to his own Watson is Button-Bright, who accompanies him on some of his cases.

The Great Detective appears to have more or less disappeared since the eighties, but fortunately Oz has another detective character. This is Brewster Bunny, a lapine detective from the town of Bunnybury, who appears in books by Chris Dulabone and Marin Elizabeth Xiques. 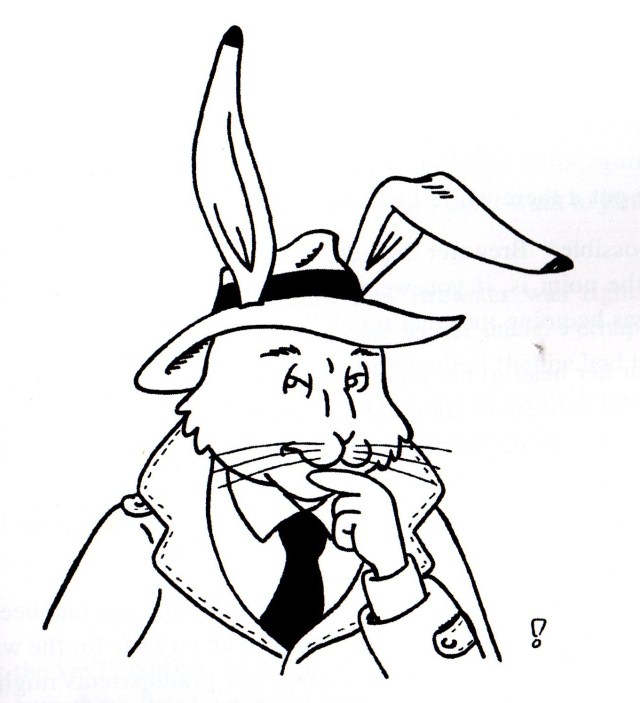 I’m not sure which book would count as his first appearance, but I believe Bunny King is one of his earliest known cases. I haven’t read that one, but books I HAVE read that star Brewster are Brewster Bunny, Haunted Hot-Tub, Purloined Pachyderm, and A Baffling Book About Bunnybury. He also makes a cameo in Lunarr and Maureen. As a detective, he’s not so much Holmes as he is a cuter version of a film noir detective. He wears a trenchcoat and fedora, smokes tiny cigarettes, and takes a keen interest in a different female rabbit in pretty much every appearance. During the course of his adventures, he becomes the royal detective first to the King of Bunnybury, and later to Glinda. Maybe there needs to be a story in which Brewster seeks out the Great Detective, but I’m not sure how many different people would need to grant permission for that.

Actually, since I just recently finished A Baffling Book About Bunnybury of Oz, I might as well include a brief review. Written by Marin Xiques, it’s a short but fun story that has Brewster investigating a rabbit who has returned to Bunnybury after a long absence. In addition to Brewster and the King of Bunnybury (never named by Baum, but called Charles in Dulabone and Xiques’s books), Dorothy also makes a brief appearance, as does the jester Martin Hopwell from Purloined Pachyderm. There isn’t a lot of meat to it, but it was a pretty good read.

Like Loading...
This entry was posted in Book Reviews, Characters, Chris Dulabone, Eric Shanower, L. Frank Baum, Marin Elizabeth Xiques, Melody Grandy, Oz, Oz Authors and tagged a baffling book about bunnybury of oz, a study in orange, brewster bunny, brewster bunny and the case of the purloined pachyderm of oz, dr. watson, glinda, great detective, jay delkin, josie o'gorman, lunarr and maureen in oz, martin hopwell, mary louise, oziana, ozma, rabbits, ruth berman, sherlock holmes, sherlock holmes in oz, sir arthur conan doyle, the adventure of the cat that did not meow in the night, the adventure of the missing belt, the bunny king of oz, the haunted hot-tub of oz, the lost princess of oz, the mystery of the missing ozma, vincent ward. Bookmark the permalink.

9 Responses to The Case of the Ozian Detectives