From Olympus to Oz

As a fan of both the Oz books and classical mythology, I have an interest in works that combine the two. Such stories are often controversial, though, both for religious reasons and because crossovers always bring in a lot of complications. While there is obviously some mythological evidence in pretty much all fantasy, would the Greek or Norse pantheons really fit in with the organization of Immortals introduced in The Life and Adventures of Santa Claus? L. Frank Baum tended to work with either more modern folklore (like Jack Frost and Santa himself) or his own mythical creations. Life and Adventures does have wood-nymphs, but they don’t appear in too many of his other works. Besides, the mere presence of nymphs doesn’t necessitate bringing in Zeus and his crew as well. Ruth Plumly Thompson did bring Neptune into The Curious Cruise of Captain Santa, which isn’t an Oz story but does have a similar feel.

The ruler of the sea appears to have been a fixture in fairy tales, appearing in both The Pearl and the Pumpkin and The Golden Goblin, which are brought into Oz continuity in Hugh Pendexter’s Wooglet.

It’s also Pendexter who, in his Crocheted Cat, describes the fate of the Olympian pantheon. When they find life in the modern world too stressful, they release Saturn so that he can create a smaller world out of ancient time. Vulcan and the Evian glassblower Silico then work together to craft a steel and glass dome to protect this world.

One thing that’s interesting is that Silico claims Saturn had been imprisoned “under the base of Mount Helicon,” and I don’t know of any other source that says this. He’s generally said to dwell in the underworld, in Tartarus, Elysium, of the cave of Nyx. The Romans think he went on to rule Italy. Helicon, a mountain in Boeotia, was mostly associated with the Muses and Pegasus. Google did reveal that a Rosicrucian alchemist named Michel Maier wrote of Saturn vomiting the stone he swallowed in place of his son onto the top of Helicon, and this rock was associated with the Philosopher’s Stone. The general consensus seems to be that this rock ended up at Delphi, however.

Marcus Mebes, in his Lurline and the White Ravens, brings the Fairy Queen Lurline into the world of Greek mythology. The story has it that she was considered for inclusion in the Olympian pantheon, and Apollo had a romantic interest in her. She’s banned from Olympus after stealing a jug of rainbow, a bottle of crystal essence, and a torch, all of which she uses to enchant Oz. This would presumably mean the enchantment took place thousands of years earlier than is generally assumed, but the newer edition of the book makes clear that the story might not be entirely true in all its particulars. I don’t know of any evidence that two of the main goddesses in the story, Kole and Lilith, were ever actually Greek deities; a search suggests that was probably a nod to Teen Titans. I have seen indications that Lilith might have been a Sumerian goddess, but they’re somewhat tenuous, and I don’t think any of them connect her with fire, anyway.

Later, Kabumpo tells a tale of an elephant-headed Egyptian goddess named Loorlinut, presumably a different form of Lurline, who refers to Ganesh as her brother. Does that mean her parents are Shiva and Parvati? Anyway, she is presumably exiled from that pantheon as well after punishing the people for taking land from the elephants. Polychrome also refers to Lurline as having been someone named Senna of Harlus, but I don’t know if this is related to any actual mythology. In Mebes and Chris Dulabone’s Magic Tapestry, Eris is the main villain, and a character named Mahira Mishrahedi is the granddaughter of Eris and Krishna. 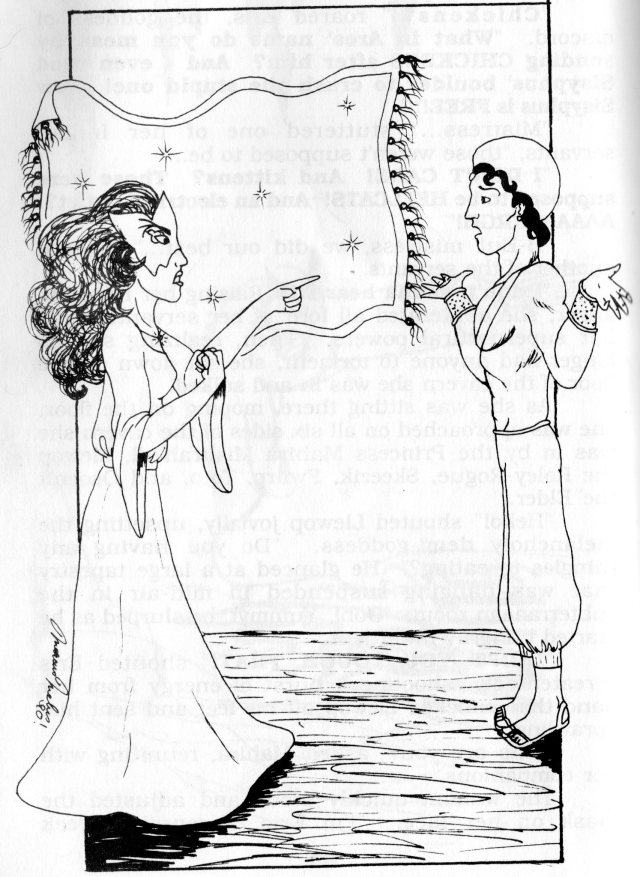 And in Marin Elizabeth Xiques’s Enchantment, Dorothy, Lulea, and a girl named Marybeth Nibbler visit Olympus in a way that acknowledges both Lurline and the White Ravens and Crocheted Cat. 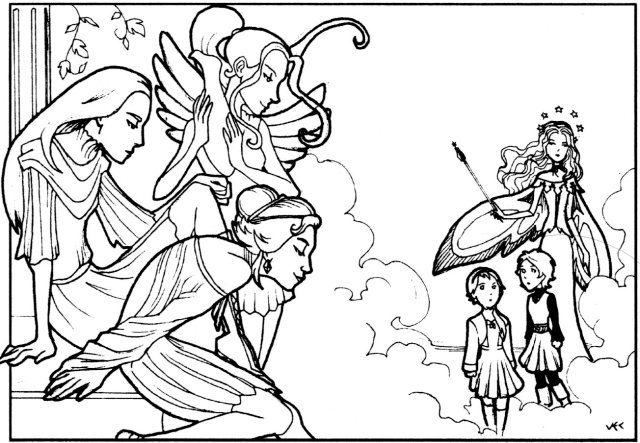 Jeff Rester’s short story “As the Rainbow Follows the Rain” confirms the assertion in Lurline that Polychrome is the daughter of Iris, and the sky fairy also states that her father was the Bifrost of Norse mythology. After being broken during Ragnarok, which is called the Great Sundering, Iris reassembles him and they have many daughters and one son. The story identifies the Sundering as when the mundane world was separated from the magical one, but gives no indication as to when this took place. The Royal Explorers trilogy, for which both Mebes and Rester are credited as authors, identifies Bifrost as a brother of the sea serpents Anko, Unko, and Inko. Finally, I should mention Martin Gardner’s Visitors, in which the Olympians have lost most of their powers and have retired to Oz, although there are rumors that they never were gods and just think they were.

5 Responses to From Olympus to Oz